Hamas divided over rapprochement with Dahlan

As Hamas studies its limited options to overcome the crisis in Gaza, some senior officials are advocating a detente with Mohammed Dahlan to weaken President Mahmoud Abbas. 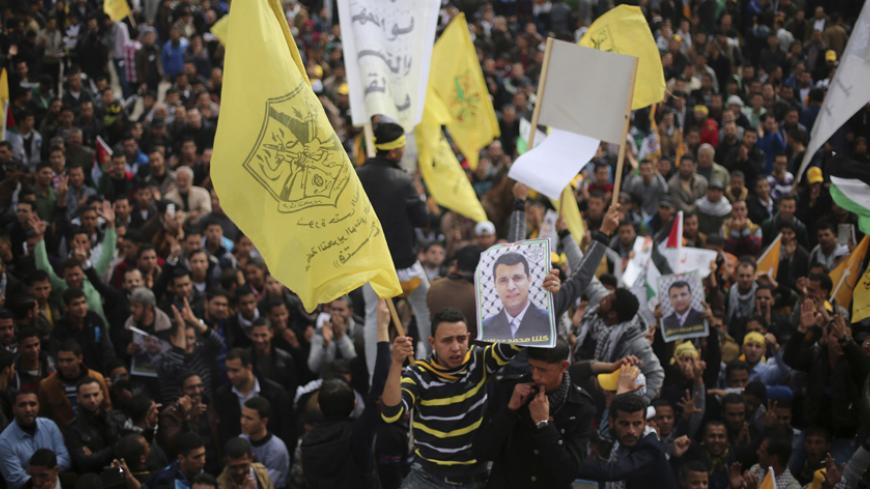 Hamas’ options in Gaza are slimming by the day as the Palestinians face further suffering following the recent Gaza war. While Hamas weighs its limited means to overcome the worsening crisis, the movement opened the door to a rapprochement with former Fatah strongman and President Mahmoud Abbas’ arch rival, Mohammed Dahlan. A series of gestures in December between the two have led to the prospect of a detente.

On Dec. 18, Hamas allowed hundreds of Dahlan’s supporters to organize demonstrations in Gaza, during which they displayed posters attacking Abbas for remaining silent in the face of Gazan suffering and for impeding reconstruction work. The protesters demanded the ouster of Abbas and an end to the Palestinian Authority’s corruption and betrayal. These pro-Dahlan demonstrations, the first since Hamas seized control of Gaza in mid-2007, marked a pivotal shift in his relationship with Hamas. But it should be noted that the demonstrations did not have the unanimous approval of Hamas officials.

On Dec. 20, Hamas participated in the National Islamic Committee for Social Solidarity in Gaza, which gave money to 10,000 people who were wounded in the recent war through funding by the United Arab Emirates through Dahlan’s bureau. On Dec. 28, Dahlan’s wife, Jalila, arrived in Gaza to meet with several charities and provide moral and financial support for the needy.

Hamas’ leader in Gaza, Ismail Haniyeh, issued the movement’s most recent statement on Dahlan on Dec. 29, during which he welcomed the recent aid provided by Dahlan in Gaza, as long as it was unconditional and separated from any regional or local agendas.

But not all among Hamas’ ranks share Abu Marzouk’s view. Senior Hamas official Yehya Moussa openly called for a rapprochement with Dahlan. He told Al-Monitor, “Abbas does not have the right to dismiss Dahlan from the Palestinian Legislative Council. His movement deals with all segments of the Palestinian people, but Abbas is the biggest enemy of the Palestinian national movement and Fatah.”

On Dec. 22, senior Hamas official Salah al-Bardawil hinted that Hamas was considering activating the Palestinian Legislative Council with the deputies supporting Dahlan to end Abbas’ dominance over the council.

Although many in Hamas still object to any working arrangement with Dahlan, the dire situation in Gaza and Abbas’ neglect of the Gaza Strip has pushed some senior Hamas officials to temporarily overcome the hostility in order to meet its current interests.

Whenever the living standards of the Palestinians in Gaza worsen, the chances of a rapprochement between Hamas and Dahlan increase, because Hamas is desperate to alleviate the suffering of the Gazan population, even if that means resorting to Dahlan. Such a rapprochement would also serve the interests of Dahlan, who would use his financial support as a means to return to Gaza and the Palestinian political scene.

Although mutual suspicion runs high between Hamas and Dahlan, their shared interest in weakening Abbas adds a further incentive to repairing their relationship.

A Fatah official close to Dahlan told Al-Monitor over the phone from Cairo on condition of anonymity, “Dahlan realizes that Hamas is playing on Fatah’s internal contradictions, and we are well aware of this. However, we have to cooperate with Hamas for now in order to take Abbas out of the scene. Dahlan and Hamas could then compete for the Palestinian street’s trust in Gaza.”

But any rapprochement still has significant hurdles to overcome, not least the strong objections from some senior Hamas members. Prominent Hamas leader Mahmoud al-Zahar has maintained his public attacks on Dahlan, the most recent of which came on Dec. 27, when he ruled out Dahlan’s return to Gaza.

Zahar also stated earlier, on Dec. 23, that Dahlan is a copy of Abbas and the conflict is merely a power struggle between the two. He noted that Hamas does not maintain any relations with Dahlan, who had a security agreement with Israel against the movement and imprisoned its political and military leaders.

A prominent Hamas leader living abroad told Al-Monitor on condition of anonymity, “It is true that the crisis in Gaza is deteriorating the situation there, and that Hamas’ options are now limited, but Dahlan seems to be one of the solutions for solving this crisis on the one hand, and an obstacle on the other. He is a security agent for Israel and other regional regimes expressing hostility toward Hamas, and reconciliation between him and Abbas could happen at any given moment.”

The Fatah official in Cairo told Al-Monitor that Egyptian President Abdel Fattah al-Sisi was “mediating between Abbas and Dahlan in order to solve their differences and put an end to the conflict. He puts the reconciliation between the two before the one between Fatah and Hamas.”

Hamas is aware that Dahlan is not naive enough to provide the ultimate solution for Gaza’s recurring issues. Although he might offer Gazans financial aid, one expects Dahlan will seek to extract something in return. Dahlan could be setting foot in Gaza again — after losing his role in Gaza seven years ago — to eliminate the Islamists’ last bastion in the region at the behest of certain regional powers.