Palestinians are divided over the motives behind recent coordination between Hamas and dismissed Fatah leader Mohammed Dahlan. 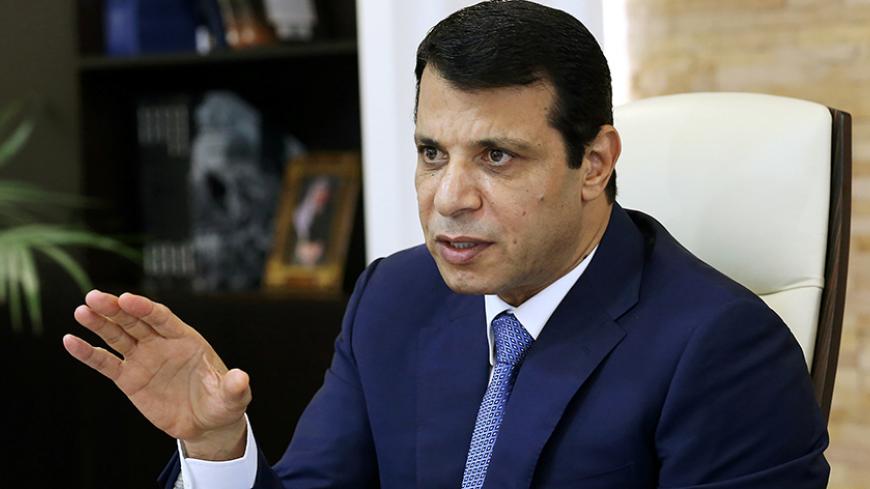 GAZA CITY, Gaza Strip — The recent rapprochement between Hamas and dismissed Fatah leader Mohammed Dahlan and the "Democratic Reformist Current," which Dahlan formed with some Fatah leaders after his dismissal in 2011, was predicted. Dahlan has been repeatedly praising Hamas — most recently during an interview with Dream TV Egypt on Oct. 23 when he implied that rapprochement with Hamas is the solution to all of Gaza’s problems.

In light of the escalating hostilities between the head of Fatah, President Mahmoud Abbas, and his rival Dahlan, the latter began to seek rapprochement with Hamas. First, he started making contact with Hamas in the Gaza Strip in order to implement humanitarian projects in Gaza that he financed, such as collective weddings and taking care of the poor, and he coordinated with Egypt to open the Rafah crossing.

Speaking to Al-Monitor, Abdul Hamid al-Masri, a Fatah leader and member of Dahlan’s current, denied any rapprochement between Dahlan and Hamas, saying, “There are talks about how to manage the citizen’s affairs and coordinate in some humanitarian projects brought by Dahlan to Gaza in order for Hamas not to impede their implementation. But this coordination has always existed between the two.”

He stressed that channels of communication between Dahlan’s current and Hamas are open, noting that it all falls within the framework of implementing relief projects. “If there were a full coordination, we would not be ashamed to advertise it as long as it falls under national relations and serves the interests of citizens. However, there is no normalization of relations,” he said.

The relationship between Hamas and Dahlan seems illogical for many, given the historical rivalry between the two that first emerged in the mid-1990s when Dahlan was head of the Preventive Security Service in Gaza, which Hamas accused of arresting and torturing its leaders.

Al-Monitor contacted Hazem Kassem, Hamas’ spokesman in the Gaza Strip, to talk about the rapprochement with Dahlan, but he refused to discuss this topic, saying that his movement is not part of Fatah’s internal conflicts.

Although Hamas had previously declared that its leader and member of the Shura Council Ahmed Yousef does not speak on behalf of the movement, Al-Monitor asked Yousef to provide information about Hamas’ internal action, given his high-ranking position.

In this context, Yousef told Al-Monitor, “We are going to start hearing about Dahlan in the framework of political positions, relief projects, ideas and solutions for the Gaza Strip. Politics are all about interests, and [our] policy can change while maintaining our moral values and principles.”

He added, “Dahlan will always be present on the political scene. The number of youths endorsing him is significantly increasing, and their number exceeds those Fatah members in Gaza. As Fatah senior leaders continue to show incompetence, the newer generation — including Dahlan — Fatah leader Samir Masharawi and others, will end up in charge.”

Yousef believes that some Hamas members may not accept Dahlan at the moment given their history with the Preventive Security Service. He said this is understandable, although Dahlan has been improving his discourse toward Hamas and the situation in Gaza by the day, saying, “This is what we have recently experienced after Dahlan coordinated with Egypt to open the Rafah crossing. The truth is that Dahlan has gotten better at politics, and he is trying to win over all Palestinian factions in hopes of unifying Fatah, although all Arab efforts to achieve reconciliation between him and Abbas have failed.”

Yousef expects Dahlan and his wife to carry out a significant number of activities in Gaza in the coming months. He also noted that people will not be surprised by this since Hamas needs to consider all options to alleviate the suffering of Gazans. “We welcome all offers of support and assistance to our people in the Gaza Strip, and we thank all those who seek to repair the relationship with our brothers in Egypt in order to put an end to the tension and facilitate the movement of students, patients and employees at the Rafah crossing,” he explained.

Dahlan has been on good terms with the Egyptian regime, particularly since his dismissal from Fatah in 2011, and visits Cairo on an almost regular basis. Meanwhile, Egypt allows him to carry out political activities in Cairo, such as holding many conferences on the Palestinian cause.

Speaking to Al-Monitor, political analyst Hussam al-Dajani said Dahlan’s current and Hamas are denying all efforts of rapprochement for several reasons. He explained that one of the main reasons was the interlocking alliances between Arab and regional parties, which requires keeping the course of this rapprochement quiet, although it was illustrated in clear practical steps. Most important among these is the release of Zaki al-Sakani, a leader of the Al-Aqsa Martyrs Brigades, Fatah’s armed wing, who was detained by Hamas in Gaza for 8½ years, and Dahlan’s statements praising Hamas and calling it an important component in the Palestinian political system. In addition, some of Dahlan’s supporters were allowed to cross through the Rafah crossing to attend the Ain Sokhna conference held by the Egyptian National Center for Middle East Studies.

He added, “Yes, there is rapprochement, but not an alliance. We stand at a crossroad where Dahlan and Hamas meet, and certain steps to build trust should be taken to achieve the interests of both parties. Dahlan has a goal to return to the Fatah movement and compete for its presidency, in preparation for the presidential elections, and he cannot achieve this without first being on good terms with Hamas in Gaza.”

Dajani believes Hamas hopes to achieve several objectives out of this rapprochement with Dahlan, and said, “Relieving the blockade imposed on Gaza and working on solving the electricity crisis and opening the Rafah crossing will benefit Hamas. In addition, the rapprochement will help the movement mend its relationship with Egypt, let alone revive the reconciliation process with President Abbas. This action would put pressure on Abbas, which Hamas could use to make Abbas meet its demands out of the reconciliation, most notably is the integration of the Hamas-appointed government employees, whose number exceed 40,000.”

The rapprochement between the two historical rivals, Hamas and Dahlan, is proof that the only constant in politics is interests while everything else changes according to circumstances.