Will Cairo turn its back on Abbas?

Egypt's position toward Hamas is changing, at the expense of its relations with Palestinian Authority President Mahmoud Abbas, as Cairo seems to be more supportive of his rival for the presidency, dismissed Fatah leader Mohammed Dahlan. 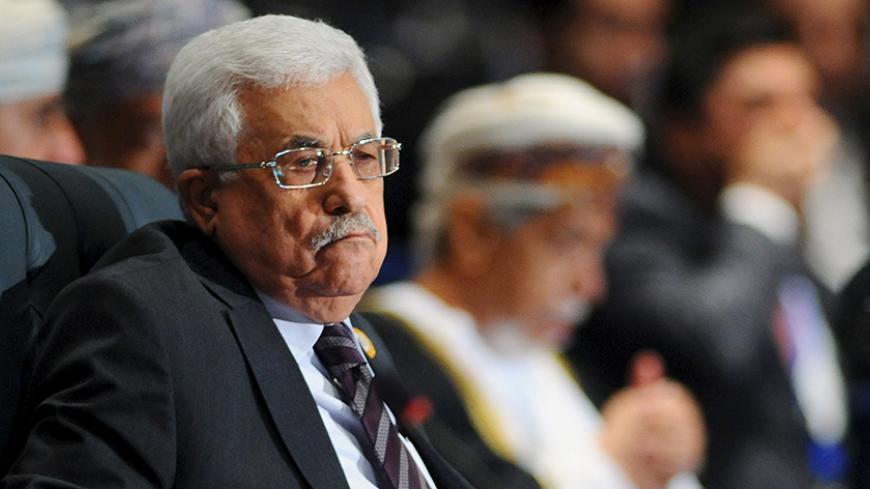 Mahmoud Abbas, the Palestinian Authority (PA) president and head of the Fatah movement, probably never suspected that the Egyptian regime and Hamas would warm up to each other, especially in light of Hamas’ relationship with the outlawed Muslim Brotherhood in Egypt. Hamas had also objected to what it called "horrific massacres" by Egyptian security forces during the breakup of the sit-ins in Rabia al-Awadiya and al-Nahda squares supporting Brotherhood-affiliated President Mohammed Morsi in August 2013. Morsi had been ousted by the Egyptian armed forces after a popular revolution in June 2013.

However, relations began warming gradually in March 2015 when the Egyptian government asked its court system to overturn a previous ruling designating Hamas as a terrorist movement. The court reversed that ruling in June 2015.

“The reduction in the estrangement between the Egyptian regime and Hamas is due to Hamas' being a key player in the Palestinian cause," Tarek Fahmy, head of Israeli studies at the National Center for Middle East Studies, told Al-Monitor. "Moreover, Egypt is especially invested in the Palestinian dossier, given its commitment toward the Palestinian brothers and toward Arab causes in general. This is especially true since stability in the Gaza Strip is considered part of Egypt’s national security, given the borders shared by Gaza and the Sinai Peninsula, and the probability that some terrorist fighters might infiltrate Egypt. Therefore, it is difficult for Egypt to ignore the role Hamas plays in the Palestinian cause.”

Regarding Hamas, Fahmy added, “It is also difficult for Hamas to ignore Egypt’s role, given the Egyptian oversight of Rafah’s border crossing between Sinai and Gaza, which represents a lifeline for the Strip amid the Israeli siege." He said Egyptian surveillance increased, especially after the Egyptian armed forces took major efforts to destroy tunnels between Gaza and Sinai in the second half of 2013; Egypt had turned a blind eye to the tunnels under Morsi. "This left the border crossing as the only entrance to Gaza,” Fahmy said.

Fahmy further explained, “The Egyptian regime and Hamas may be trying to agree on common interests. This is despite the Egyptian security’s difficulties in pursuing Hamas members suspected of being involved in the assassination of former prosecutor general Hisham Barakat, for example, and despite repeated attempts by Hamas to dig new [people and goods smuggling] tunnels between Sinai and Gaza.”

It should be noted that in a Nov. 22 official statement, Hamas welcomed the ruling issued by the Egyptian Court of Cassation canceling a life prison sentence against Morsi on charges of spying for Hamas. Hamas said the ruling shows that the Palestinian issue is real for Egypt, which treats Palestinian parties equally.

The talks between Egyptian authorities and the Hamas delegation come at a time when Abbas’ relations with Egypt are witnessing some tension, despite the friendship he enjoys with President Abdel Fattah al-Sisi.

Moreover, on Sept. 21, Mohammed Dahlan, a former Fatah leader who was dismissed in 2011 following a dispute with Abbas, called for a national conference for all national and Islamic factions to reach a platform and a unified political vision. He no longer considered the talks between Hamas and Fatah a successful way to end the division. The Safa press agency quoted Fatah leaders who support Dahlan as saying they would prefer holding that conference in Cairo.

On Oct. 25, the Mekameleen channel, which supports the Brotherhood and broadcasts from Turkey, leaked what it claimed to be a phone call between Wael el-Safty, an officer in Egypt's General Intelligence Directorate in charge of Palestinian affairs, and Dahlan. In that call, Safty supposedly criticized Abbas and described him as lacking “wit” and being “subject” to foreign pressure.

Cairo’s improved relations with Dahlan’s camp seem to be putting Abbas in an uneasy position, especially after the aforementioned leak, as the media is speculating that Egypt will support Dahlan as PA president in the upcoming elections, which have yet to be set. Abbas’ official constitutional term in office expired in 2009. The support for Dahlan may have been the reason behind Abbas’ visits to Turkey and Qatar in October.

“Perhaps Abu Mazen [Abbas] is looking for new allies in the region in light of the steps he regards as a rapprochement between Egypt and Hamas, out of fear that his camp might fall outside the scope of power as they lose it to Dahlan or Hamas. He might also try to convince Hamas, through their biggest allies Turkey or Qatar, to reconcile or ally with him," Hani al-Gamal, the manager of al-Kenanah Studies Center, told Al-Monitor.

“There is currently competition between Dahlan and Abu Mazen to reconcile with Hamas. I do not think that Egypt supports anyone for the Palestinian presidency. However, I still believe the repeated failure of reconciliation attempts between Abu Mazen and Hamas will push the movement to completely reject him [Abbas] and his camp, which is against the Egyptian attempts to reach a Palestinian consensus,” Gamal added.

It seems Egypt is turning its back on Abbas, and it will most likely open its arms to Dahlan, as he has a better chance of winning Hamas' approval. The understanding among Dahlan, Cairo and Hamas at Abbas’ expense became clear when Egyptian authorities agreed to release seven detainees from Gaza on Oct. 19 — despite investigations into their possible involvement in terrorist activities — in return for Hamas’ release Oct. 19 of Zaki al-Sakani after negotiations with Dahlan over the matter. Sakani was a leader of Al-Aqsa Martyrs Brigades, Fatah’s dissolved military wing.

Egypt’s expected preference for Dahlan and its rapprochement with Hamas is related to Abbas’ inability to agree with Egypt's policy on the Palestinian cause, which mainly stipulates the establishment of a powerful PA that is able to protect the borders between Egypt and Gaza. Dahlan might succeed in doing so through his efforts to procure investments for the reconstruction of Gaza, and his potential support — especially after the Sakani deal — for some Al-Aqsa Martyrs Brigades generals who refuse to hand over their weapons as per Abbas’ decision in 2007. Such a step might create balance in Gaza with an armed Hamas under Dahlan’s banner.

Neither Abbas nor any members of his camp succeeded in reaching a true rapprochement with Hamas. After Cairo brokered an agreement in May 2011 in which Hamas and Fatah consented to establishing a government of national accord, Abbas showed intransigence toward Hamas in his formation of Salam Fayyad’s governments and Rami Hamdallah’s first government.

Abbas also ignored Hamas’ rejection of the appointment of Riyad Malki foreign minister in the national consensus government in 2015. Hamas had also suggested establishing a Ministry of Prisoners in the new government, which Abbas overlooked. Abbas seems to have taken advantage of the economic siege imposed on Hamas following Morsi’s ouster in Cairo and the Egyptian army’s takeover of Palestinian tunnels to form the government according to his choices. The economic pressure may have been behind Hamas’ eventual acceptance of Malki, as it was unable to keep the economy functioning after the tunnels between Sinai and Gaza were taken over, without financial support from the PA under Abbas.