In an exclusive interview with Al-Monitor, Mohammed Dahlan confirmed that reconciliation efforts with Palestinian President Mahmoud Abbas are currently stalled and warned that Abbas' internal weakness would reflect the fragility of his political position vis-a-vis the Israelis. 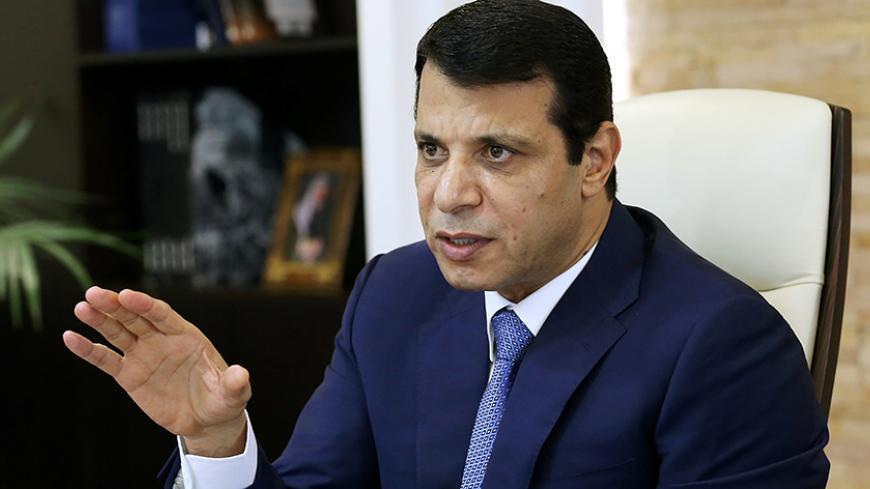 In an exclusive interview with Al-Monitor, Mohammed Dahlan speaks about the stalled reconciliation efforts with Palestinian President Mahmoud Abbas and recent developments in Hamas. Dahlan, who spoke from Cairo, is a senior Fatah leader, member of the Palestinian Legislative Council (PLC), former member of the Fatah Central Committee, former head of the Preventive Security Service and a staunch opponent of Abbas.

The dispute between the two erupted in 2011, when Abbas issued a decision to dismiss Dahlan from Fatah’s Central Committee in May of that year on charges of attempting to lead a coup against him. Dahlan remains to this day a source of concern for Abbas.

Dahlan, also known as Abu Fadi, enjoys increasing influence and popularity among senior Fatah members in the Gaza Strip because of his support for them in light of Abbas' marginalization of Gaza.

In April 2016, Dahlan established the Democratic Reformist Current within Fatah, which includes a large number of Fatah leaders who oppose Abbas’ policies. He also has a growing network of regional and international relations in some Arab and Western countries. The dismissed leader sees himself a potential successor of Abbas in the political scene.

Al-Monitor:  What is the latest development on your disagreement with President Abbas? Were reconciliation attempts between you stalled? How do you respond to the allegations that you are providing your supporters in the West Bank with money and weapons to destabilize Abbas' authority there?

Dahlan:  There are no reconciliation efforts for the time being. Abu Mazen [Abbas] has rejected all bona fide efforts, and the issue of reconciling with him, for me, is in the past now. But me and my colleagues in the Fatah Democratic Reformist Current will keep working to preserve Fatah’s national positions regarding Jerusalem and the return of refugees. These issues are supported by Hamas and most factions of the PLO, and they may also be supported by the large majority of the Palestinian people. We are getting ready for the next stage that will witness comprehensive parliamentary and presidential elections, since Abu Mazen’s position today is weakened and he lost legitimacy. He is unable to pass political solutions affecting the rights of our Palestinian people as he lost the popular cover, legitimacy and support.

Al-Monitor:  What about the recent conferences held in Cairo in the past few months? Were they held in response to Fatah’s seventh General Conference in November 2016, from which Abbas excluded anyone who has any connection to you?

Dahlan:  Egypt has hosted a wide range of seminars and conferences to discuss the situation of our people in Gaza with the participation of hundreds of prominent figures, intellectuals, dignitaries, youth and activists from Gaza.

The security situation in the Sinai Peninsula — especially the cities of Rafah, el-Arish and Sheikh Zuwaid — is difficult. Sinai is a zone of combat against terrorists, where the Egyptian state is carrying out daily security and military operations. However, Egypt is deploying serious efforts to re-equip the Rafah crossing and facilitate the movement of people and goods to and from Gaza.

Al-Monitor:  Do you believe that Abbas’ recent appointment of two of your opponents — Mahmoud al-Aloul and Jibril Rajoub — to the posts of Fatah Central Committee’s deputy head and secretary killed your chance to return to the movement? Will there be an alliance between you and Marwan Barghouti, who was also denied any leading position in Fatah by President Abbas?

Dahlan:  I do not want to mention names. No one — no matter how powerful and influential — can dominate a wide-ranging and spread-out movement such as Fatah. My colleagues and I defend our affiliation to this movement and seek to unify its rank and restore its natural position as a leading Palestinian national faction.

Al-Monitor:  How do you read the results of the recent Hamas elections in Gaza and the rise of Yahya Sinwar as its new leader? Will Sinwar, whom you have known for 30 years, play a positive or negative role in the Hamas-Dahlan reconciliation?

Dahlan:  I do not read the election of Sinwar in light of the rumors spread by Israel around him of being an extremist. We should not fall into the Israeli trap and characterize people according to its classification. The election of any fellow citizen in any leadership position within Hamas is an exclusive right for Hamas. I have known Sinwar for many years, and I hope he prioritizes general national interests over personal and partisan interests, ends the division and rearranges the Palestinian internal situation.

Al-Monitor:  How do you see the assassination of senior Hamas militant Mazen Fuqaha, Hamas’ military commander?

Dahlan:  It is a clear failure of the security situation in Gaza. The assassination is part of an ongoing conflict with Israel. I do not want to go into details; I prefer to wait for the announcements made by Hamas concerning its investigations into the crime.

Dahlan:  Today there is direct contact between our brothers in Egypt and Hamas leaders in Gaza, and this is a good thing that we intend to build on in the future. Egyptians are considering all possible means to ease the pressure on Gaza, which requires a good level of trust and coordinated procedures with Hamas. This would have positive effects on the movement of persons, trade and security in the Gaza Strip.

Al-Monitor:  Do you think Donald Trump's presence in the White House would bring a solution to the Palestinian cause or, to the contrary, further complicate it in light of allegations that Trump is biased toward Israel? How do you see the current visits of Arab leaders to Washington?

Dahlan:  Egyptian President Abdel Fattah al-Sisi and Jordanian King Abdullah should be trusted in their politics or approaches toward the United States. The Egyptian and Jordanian roles are essential in following up on the Palestinian cause with Washington in light of the internal Palestinian weakness.

Al-Monitor:  What about the recent leaks about the Gaza-Sinai state as an alternative to the Palestinian state in the West Bank and Gaza Strip?

Dahlan:  Any just solution to the Palestinian cause must be based on the independence of our people and the establishment of an independent state with East Jerusalem as its capital. I fear the weak internal situation of Abu Mazen in light of the continued division, the exacerbation of the Fatah crises and the undermined Palestinian legitimacies — especially of the presidency and the PLC — would shake his political position.

Abu Mazen is not authorized to relinquish and undermine the principles of the Palestinian cause, such as the principles related to borders, Jerusalem and refugees, and he does not have any authority to unilaterally decide to return to the negotiating table with Israel.

Al-Monitor:  When will you return to your hometown in the Gaza Strip, and are there arrangements with Hamas in this regard?

Dahlan:  At present I have no direct personal close relations with Hamas, but fellow leaders of the reformist movement within Fatah are in continuous contact with Hamas leaders to work on ensuring the best interest of our people.

Al-Monitor:  How do you assess the outcome of the Arab summit held in Jordan on March 30 and its impact on the Palestinian cause?

Dahlan:  Holding a summit with this high level of participation of Arab leaders is an achievement for Jordan and a culmination of the serious efforts deployed by King Abdullah.

The outcomes of the summit were good in light of the current Arab circumstances. The summit reaffirmed that the Arab Peace Initiative is the minimum accepted consensus at the Arab level. What remains to be seen is whether Arab leaders will put their money where their mouth is.