In an interview with Al-Monitor, Hamas spokesman Sami Abu Zuhri spoke about the improvements in Hamas-Egyptian ties and other Palestinian issues. 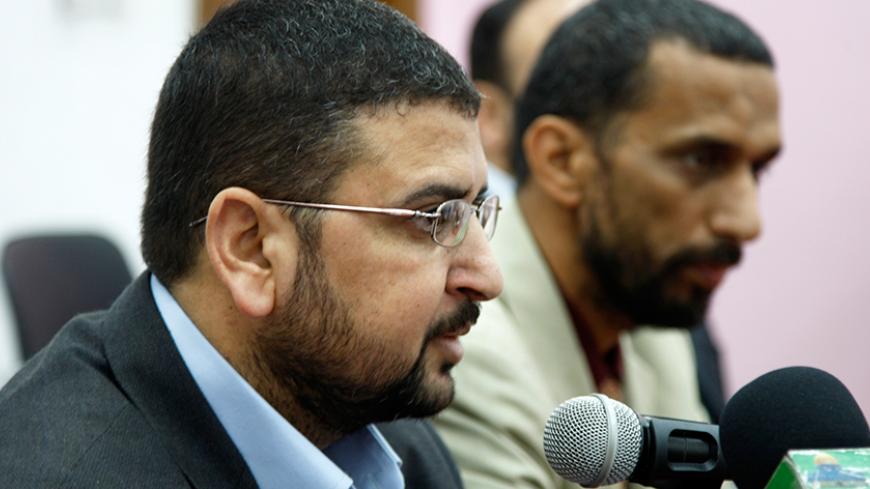 GAZA CITY, Gaza Strip — Ever since the overthrow of Egyptian President Mohammed Morsi on July 3, 2013, the Hamas movement has found itself in Egypt's crosshairs. The Cairo regime embarked on a campaign to destroy the border tunnels. It accused Hamas of supporting terrorist organizations in the Sinai Peninsula and called Hamas' military wing, the Izz ad-Din al-Qassam Brigades, a terrorist organization. Egypt also tightened its blockade on the Gaza Strip and closed the Rafah crossing. Meanwhile, Egypt's leading role in the Palestinian cause has faded.

However, the Hamas delegation's March 12 visit to Cairo may have brought back some hope that a new page of bilateral relations between the two parties will be opened. In a May 17 statement by its spokesman Sami Abu Zuhri, Hamas welcomed the recent Egyptian statements about reconciliation with the movement and confirmed its readiness to deal with these efforts calling for ending the Palestinian division and opening a new page with Egypt.

Al-Monitor spoke to Abu Zuhri, a native of Rafah and lecturer in the Department of History and Archaeology at Gaza's Islamic University since 2000. He is currently an assistant professor in the department and holds a doctorate in Islamic history.

Al-Monitor:  How does Hamas perceive the relationship with Egypt?

Abu Zuhri:  The Hamas movement is keen to develop its relations with Egypt, as this will serve the interests of the Palestinian people in Gaza. Hamas has always been considering the depth of this strategic relationship, since Egypt and its leading role in the protection of the Palestinian cause are very essential, and we are aware of Egypt’s power and impact on all core issues, especially the issue of Palestinian reconciliation.

Al-Monitor:  Is it possible for Hamas to restore relations with Egypt and redevelop them?

Al-Monitor:  Following the fall of Morsi, Hamas faced an unprecedented Egyptian media attack in which it was accused of prejudicing the security of Egypt. What is your response?

Abu Zuhri:  From the very beginning, we rushed to condemn the media defamation of Hamas, and we said that accusations of the movement being behind the developments in Sinai were untrue. We called on the Egyptian leadership and the Arab parties to shoulder their responsibilities in this regard because Hamas never targeted Egypt's security and dignity.

Al-Monitor:  What does Egypt want of Hamas today? What was the aim of the recent visit to Cairo?

Abu Zuhri:  Egypt wants its privacy and security to be respected. It does not want anyone to intervene in its affairs. During the meetings that were recently held, the Egyptian intelligence services offered a comprehensive vision through which public relations can be restored, most notably Hamas’ noninvolvement in Egyptian affairs and abstinence from supporting terrorist organizations in Sinai. According to this vision, the border between the two sides should be protected and media outlets monitored. For its part, the movement presented its vision, which stipulated the opening of the Rafah crossing and the achievement of reconciliation with Fatah. The parties agreed on the implementation mechanisms. More meetings will be held in this regard.

Abu Zuhri:  We are aware that the continued poor relationship with Egypt leads nowhere. … Therefore, we are seeking rapprochement with [Egypt] by offering goodwill gestures, especially considering that we have nothing to do with what is happening there, and this is what we want to convey to Egypt. We want to provide reassurances that we are interested in the protection of its national security. Therefore, we are aware that rapprochement with Egypt grants stability and security … to the Palestinian people.

Al-Monitor:  Egypt believes that Hamas is ideologically and organizationally linked to the Muslim Brotherhood in Egypt. How true is that? How does Hamas perceive this relationship?

Abu Zuhri:  Our current perception of the Muslim Brotherhood in Egypt is still the same. It has not changed. After all, the Hamas movement has roots related to the Muslim Brotherhood, but we are an independent Palestinian movement that has no organizational links with Egypt’s Muslim Brotherhood. We make our decisions independently and we deal realistically with all the issues. There may be decisions with a certain political dimension that the movement might have to pay the price for, but the key to success is not to go back. The key is to rectify the situation and stay in line with the public interest because we are part of this people. Therefore, we are ready to deal with the Egyptian authorities, regardless who they are directed by, in accordance with the comprehensive vision between the two parties.

Al-Monitor:  How valid are [Hamas official] Salah Bardawil’s statements about the foiling of an operation that targeted President Abdel Fattah al-Sisi?

Abu Zuhri:  Salah Bardawil’s statements are entirely accurate, and they affirm that the movement detected a cell supported by [Fatah Central Committee member] Tawfiq Tirawi and the former intelligence chief. The cell was planning to harm Egypt's security, specifically President Abdel Fattah al-Sisi, and Hamas will brief Egyptian officials with the full details of this case.

Abu Zuhri:  The great Egyptian role in the reconciliation efforts is no secret to anyone, but after July 3, 2013, this role faded, and the recent Egyptian statements have been made in consideration of Egypt's desire to restore its role in the Palestinian cause and achieve reconciliation with Fatah, since Egypt and its territories have always been the sponsor of the Palestinian cause. This is a new twist that we warmly welcome, and we are ready to deal with this role.

Al-Monitor:  What is the position of Palestinian President Mahmoud Abbas and Fatah on Hamas’ relationship with Egypt?

Abu Zuhri:  We have information confirming President Abbas’ and Fatah’s discomfort with the rapprochement with Egypt. This means that they will seek to foil any Egyptian efforts to end the division, and they will seek to deepen the points of contention in the absence of a real will to end the division. We also see indications that they do not desire reconciliation. The arrests and the security coordination [with Israel] in the West Bank as well as the insecurity and chaos that Abbas and Fatah are planning on spreading in Gaza are the biggest proof of that.

Al-Monitor:  How will Gaza’s relationship with Egypt be in the future?

Abu Zuhri:  We look forward to Gaza’s restoration of relations with Egypt, and we know for a fact that it will be achieved because of the existing data and the persistent connections between us. There is a significant improvement in the relationship, and we hope it will be developed in a way that serves the Palestinian cause. As for the Palestinian reconciliation, it will not be achieved so long as Fatah shows no real will to deal with Gaza.