In an exclusive interview with Al-Monitor, Mousa Abu Marzouk, deputy chairman of Hamas' political bureau, said that although it "will not recognize Israel ... Hamas will not burden the next government's success with hurdles and obstacles." 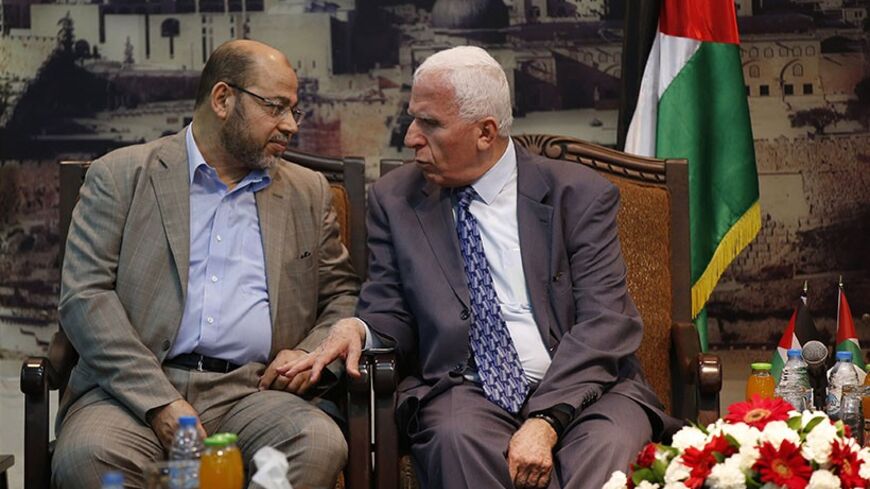 “This is a red line that cannot be crossed,” said the 63-year-old Hamas leader who played a pivotal role in achieving the reconciliation deal with Fatah on April 23.

Abu Marzouk’s remarks come as Hamas leader Khaled Meshaal and Palestinian Authority President Mahmoud Abbas meet in Qatar. The Hamas leader added that the Quartet’s requirement that Hamas recognize Israel “do not concern us one bit.”

“We would have spared ourselves seven years of misery under the siege and two wars in 2008 and 2012 had we wanted to recognize Israel,” he said.

Abbas said April 26 that a unity government would recognize Israel, but this was not agreed upon with Hamas, according to Abu Marzouk, who said that Abbas “alone is responsible for his words.” He also reiterated Hamas’ refusal to disarm the Izz ad-Din al-Qassam Brigades.

“Hamas’ position in this regard is clear, and it will not allow any tampering with the brigades’ armament under any circumstances,” said the Hamas deputy leader.

Abu Marzouk, who is based in Cairo, said he made a request to the Egyptian security services to permit him entry into Gaza to facilitate the deal, describing Hamas-Egypt relations as “markedly improving” following a period of high tension brought about by the ouster of former President Mohammed Morsi last July.

There has also been recent talk of a possible visit by Meshaal to Tehran to restore the ties that have been damaged by the Syria crisis. That visit remains indefinitely delayed.

Abu Marzouk conceded that restoring ties with Iran remains a work in progress, saying, “I do not think that the relationship with Tehran is as it was in the past, but there are efforts to repair it.”

Al-Monitor:  Palestinians in Gaza and the West Bank are skeptical about the prospects of reconciliation. Are you confident that it will be implemented, in light of past failures? And why are the Palestinian masses not convinced that it will last this time around?

Abu Marzouk:  The overall political situation is very difficult. But all problems must be faced for reconciliation, which came about as a result of internal and external factors, to succeed. First and foremost, contributing factors included the presence of a sincere desire toward that end on the part of Fatah and Hamas. The second factor was a disregard toward external meddling that disrupted these efforts in the past. And third was the political pressure felt by both sides. In the West Bank, Fatah has endured never-ending crises revolving around [Israeli] settlement efforts, Judaization and the failure of negotiations, while Hamas has had to contend with the siege and the dispute with Egypt. And fourth was the attempt by some Arab regimes to renege on their responsibilities toward the Palestinian cause under the pretext of internal Palestinian divisions. All of these factors bolstered efforts toward achieving reconciliation and emphasized the need to unify the Palestinian ranks.

The difference is great this time around, and reconciliation is not what it used to be. Yet, its implementation will require diligence by both parties, as well as seriousness in addressing the issues and a commitment to professionalism, to overcome all hurdles on the path toward ending the state of division, despite the reservations expressed by some. The issue of freedoms must thus be addressed, for it is shameful for Palestinians to be arresting other Palestinians and restricting their freedom. We must provide an atmosphere conducive to reconciliation, and put an end to the reprisals against resistance activists in the West Bank.

Its desire and conviction in reconciliation led Hamas this time to overcome many issues that remained contentious in the past. Instead of there being a victor and vanquished, achieving half a victory is much better than suffering a total defeat.

Al-Monitor:  Many say that your arrival to Gaza played a pivotal role in achieving reconciliation. What is that role? And was Egypt’s consent to you coming to the Gaza Strip an indication that it supports the ongoing efforts?

Abu Marzouk:  I submitted an application to Egyptian security services to come to Gaza and participate in the signing of the reconciliation agreement. Three days later, the request was approved, with the hope that reconciliation would succeed this time. And indeed, this is what occurred, with Egypt being one of the first regional countries that lauded the effort.

Al-Monitor:  It has been said lately that Hamas was considering nominating one of its leaders to the presidential elections. What is the background of this historical step, and what are its results?

Abu Marzouk:  Hamas is seriously studying this issue, and our previous experience through legislative elections and governmental positions has proven that popular legitimacy is an important factor. As a result, we will deal with these elections with an utmost degree of national responsibility. We will participate in all public service and political elections. Presidential elections, on the other hand, were not the subject of prior deliberations by the movement, but the truth of the matter is that Hamas will not shy away from any future elections, regardless of their level.

Al-Monitor:  The weapons wielded by the al-Qassam Brigades constitute one of the hardest issues dealt with in the reconciliation effort. What are Hamas’ proposals in this regard, and what are the red lines that you think must not be crossed? Will you allow the brigades to be assimilated into the Palestinian security forces?

Abu Marzouk:  This issue was not discussed at all in reconciliation negotiations with Fatah; it was never put on the table. The al-Qassam Brigades’ weaponry is of national importance to confront the occupation. Hamas’ position in this regard is clear, and it will not allow any tampering with the brigades’ armament, under any circumstances, because it is a strategic asset for all Palestinians. In contrast, the Quartet negotiations require that violence be renounced, which, in effect, means that the al-Qassam weapons must be decommissioned. But this is unacceptable, and Hamas will reject it outright.

Al-Monitor:  It was not clear whether Hamas would endorse the agreements signed between the PLO and Israel, if it became part of the former. Can you clarify the movement’s position in this regard?

Abu Marzouk:  Hamas will not recognize Israel. This is a red line that cannot be crossed. The future government is not interested in providing Israel with recognition, and the conditions set by the Quartet committee do not concern us one bit. We would have spared ourselves seven years of misery under the siege and two wars in 2008 and 2012 had we wanted to recognize Israel. Hamas underwent great political pressure and suffering during the past years, and yet it did not recognize Israel.

At the same time, Hamas will not burden the next government’s success with hurdles and obstacles. On the contrary, it will strive to market it internationally. We were encouraged by the level of regional and international acceptance of the reconciliation. Russia and the European Union endorsed it, and the American and Israeli stances against it saw some marked retreat, which is encouraging.

[Abbas'] statement before the [Palestinian] Central Council on April 26, about the next government’s commitment to his political line, was not agreed upon, and he alone is responsible for his words.

Al-Monitor:  How important is the emergence of Mohammed Dahlan as a political actor in the Gaza Strip once again? And what about his public dispute with Abbas concerning the reconciliation decision?

Abu Marzouk:  Hamas does not deal with Fatah as a disparate group of factions here and there. We signed a reconciliation agreement with Fatah, irrespective of [Abbas'] intentions or his internal organizational calculations. It is true that the split occurred with Dahlan’s faction in Gaza in 2007, but Hamas is determined to implement the reconciliation agreement with all Fatah factions, regardless of their organizational loyalties or partisan allegiances.

Al-Monitor:  What is the latest news concerning the protracted reconciliation between Hamas and Iran? What is causing the continued delay for Meshaal’s upcoming visit?

Abu Marzouk:  The region is undergoing a reshuffling of relations and alliances that includes Hamas. As a result, Hamas is endeavoring to fix some deep-rooted problems and ongoing differences as well as rectify any misunderstandings with Iran. I do not think that the relationship with Tehran is as it was in the past, but there are efforts to repair it as much as possible. We hope that it returns to normal, for Hamas must not be hostile in its relations, except with the Israeli enemy. Our relationship with Iran will be restored regardless of the Syrian crisis, because we share many commonalities, and we will do our best to restore it to past levels.

Our improved relationship with Iran is determined by the extent of its proximity and support for the central issue that is the Palestinian cause. It is true that the relationship with Tehran was marred by some hesitation or deterioration, but Hamas is keen on bolstering those ties once again, without prejudging the relations that exist between Iran and other regional countries.

Al-Monitor:  Some believe that electing Abdel Fattah al-Sisi as president of Egypt would reduce tensions with Hamas. How do you view the development of the relationship between the two in light of your stay in Cairo and your contacts with the various political forces?

Abu Marzouk:  We are a country under occupation, and we do not possess a surplus of power allowing us to forego others, including our Egyptian brothers. Egypt always played a pivotal role in all crucial moments of the Palestinian cause. As a result, we have no alternative for Egypt, and Egypt cannot do without us, because it is a main player in determining the course of regional policies.

I would like to stress that Hamas has never, nor will it ever, meddle in Egyptian affairs. It respects the choices that the Egyptian people will make in the coming period. I categorically deny the accusations and allegations leveled against Hamas concerning its meddling in Egyptian affairs. I can say that the relationship between Egypt and Hamas is markedly improving, and we hope that it will continue to evolve for the better until it is restored to its former glory.