Hamas representatives have downplayed reports and said that the movement's leaders are on the same page. 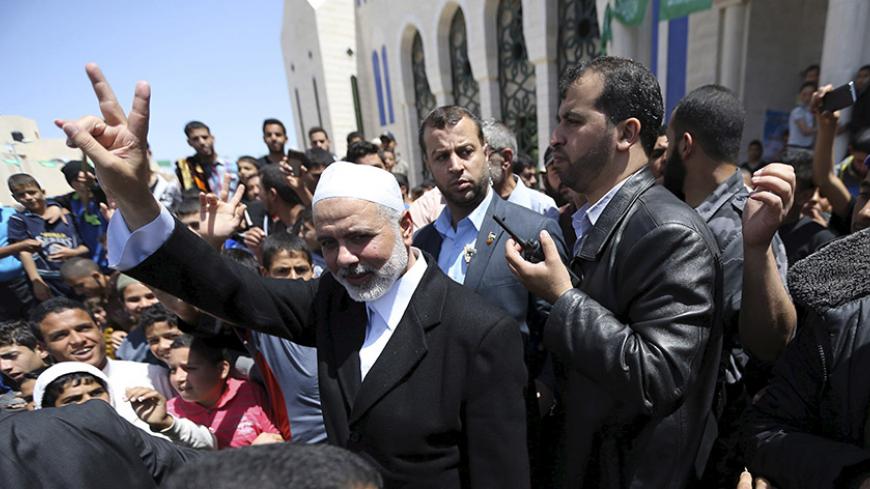 Along with the growing number of visits of Arab and foreign delegations to the Gaza Strip to discuss the truce between Hamas and Israel to lift the siege, discussion about differences between Hamas political and military leaders is increasing; this was mentioned in the Israeli press April 16.

Talk about the divergent opinions between the political and military wings in Hamas has grown in light of the Palestinian developments: the reconciliation with Fatah, the repercussions of the recent war on Gaza, the continuation of a tense relationship with Egypt and the state of tug-of-war with Iran — and the latter’s impact on financial and military support for Hamas.

Izzat al-Rishq, a member of Hamas’ political bureau, told Al-Monitor, “Hamas has an integrated and a concerted system regarding its objectives and means. It manages its work according to democratic and shura-binding mechanisms in its leader-institutions, in and outside of Palestine, and between its political and military levels.”

Rishq, the closest to Hamas leader Khaled Meshaal, added, “Harmony within the Hamas leadership does not mean that there aren’t different views on fast-moving events, at the Palestinian, regional and international levels. However, the different points of view consolidate after discussions within the Hamas leadership, and then everyone adopts the same opinion that binds the entire movement on both the political and military levels, at home and abroad.”

Husam Badran, a former Hamas military leader and current Hamas spokesman, told Al-Monitor, “Hamas has its shura advisory institutions, and its own agreed-upon regulatory mechanisms to take political and military decisions. There isn’t conflict or inconsistency between its political and military wings; the relationship between the two is clear, both practically and historically.”

Badran explained the nature of the relationship between Hamas’ politicians and military members, saying, “Political and foreign relations decisions are the political leadership’s responsibility. Meanwhile, Hamas’ military wing, al-Qassam Brigades, takes care of field operations, and chooses the means and mechanisms in the fight against Israel, but there is no conflict of powers within the ranks of Hamas’ wings.”

However, some events indicated internal differences between politicians and military members in Hamas, such as when al-Qassam Brigades spokesman Abu Obeida demanded on Aug. 20 that the Palestinian negotiating team withdraw from the truce talks in Cairo during the Gaza war.

Ahmed Yousef, former political adviser to Ismail Haniyeh, deputy head of Hamas’ political bureau, demanded on Dec. 15 that Hamas put its weapons aside for a certain period of time, to be determined by politicians.

News on May 3 reported a dispute between Hamas’ politicians and military members upon choosing allies in the region. The military preferred a rapprochement with Iran to guarantee the continuation of funding, while the politicians wanted to get close to Saudi Arabia and Egypt.

Issa Nashar, a founding Hamas leader, said April 30 that there are no currents of discord within the movement, deeming talks about a conflict between the military and political wings mere illusions.

The decisions made within Hamas come through official bodies, and some issues are presented to the leadership itself while decisions are made following binding advice from the highest-ranking leadership to the lowest, according to Nashar.

This may be in conflict with some of the decisions taken by Hamas without reference to all levels of leadership, such as the reconciliation agreement with Fatah on April 23, 2014, and the decision about the recent war on July 7. These two events spawned a lot of reactions that were not in harmony, and showed disagreement within Hamas.

While Hamas’ politicians hold meetings with regional and international envoys, its military wing receives reports on these meetings and gives its opinion. Since Hamas is a secretive movement that does not disclose its organizational structure and its decision-making mechanism, there is a severe lack of information about this sensitive issue.

Hamas has a Shura Council that provides legal cover for political and military decisions, decides on general policies and approves plans and budgets. The number of the council's members ranges from 50 to 70, made up of both Gaza and the West Bank, from the leaderships abroad and detainees in Israeli prisons.

There is also a tighter, more elitist Shura Council, the final decision-maker in Hamas. It elects the political bureau, Hamas’ highest leading body. All crucial decisions are strictly made by this council in which leaderships from in and outside of Palestine are represented, but the specific number of its members remains unknown.

Hamas’ military leadership is represented by al-Qassam Brigades’ military council, which is enshrouded in intense secrecy. All of its members — whose exact number remains unknown — are wanted by Israel, some of whom are represented in the political leadership, and have had, in recent years, a clear impact on Hamas’ orientations and its political and military decisions.

A Hamas military official who spoke with Al-Monitor on condition of anonymity said, “Hamas is an armed resistance movement. Some realize that the military wing now represents a main component in the taking of crucial decisions regarding the movement’s future, at the security and military levels. This [the military wing’s increased importance] is due to the heroic performance of al-Qassam Brigades’ fighters in the three Israeli wars on Gaza: 2008, 2012 and 2014, and which resulted in the expansion of the brigades’ popularity among Palestinians and Hamas members.”

He added, “This does not mean that Hamas is suffering from a division between its political and military wings nor a militarization of political decisions. The military members are well aware that Hamas is an Islamic advocacy movement before being a political movement with a military wing. Thus, al-Qassam Brigades’ relationship with Hamas’ political leadership is integrated organizationally and separated in the field, where the soldiers participate in the decision-making and guidance, but are separated from the competent politicians when it comes to the practical aspects of military action."

The presence of active military leaders in Hamas’ political bureau gives them an indisputable influential power, in particular Mohammed al-Deif, Marwan Issa, Yahya Sinwar and Rouhi Moushtaha, all of whom are charismatic military figures with great presence in the Palestinian arena; Hamas’ political leadership is well aware of this.

“Claims about disagreement between Hamas’ political and military wings are not true. Their purpose is disturbance and convincing public opinion that there are conflicts within Hamas. All of the movement’s political and military institutions agree on its operations and do not need detailed instructions to carry out or suspend them, since this [task] is entrusted to the military wing, trusted by the leadership,” Rishq told Al-Monitor.

In conclusion, Hamas, which has emerged from three fierce wars with Israel, feels that its military wing represents a wall protecting it from all possible threats, leading it to take into account the final stance of al-Qassam Brigades — which is often likely to present the nature of Hamas’ general attitude.

However, Hamas finds itself compelled to respond to some of the political calls to conclude a truce with Israel, or to engage regionally, which requires it to lighten its revolutionary speech at times and moderate its military performance at other times. The success or failure of this is dependent upon the nature of the situation experienced by Hamas.