Has the military wing tightened its grip over Hamas?

The election of military leader Yahya Sanwar as the head of Hamas’ political bureau in Gaza has raised questions on the movement’s policy at home and abroad and the military wing’s grip over the movement. 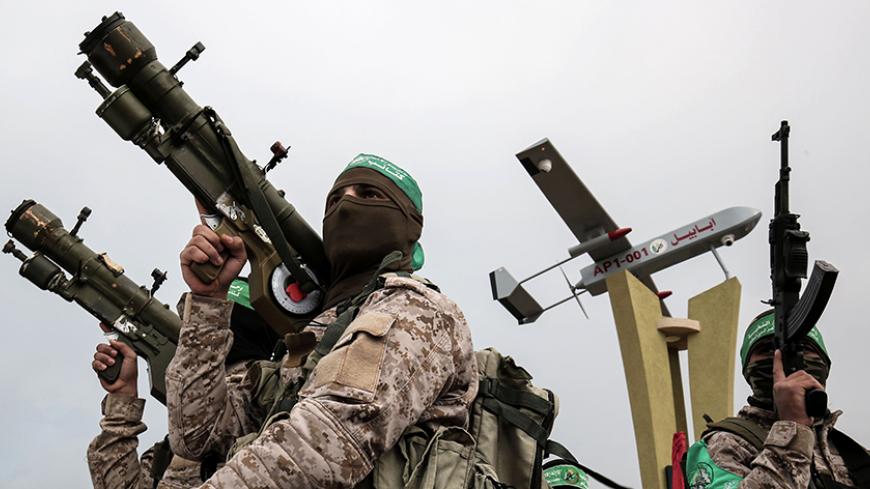 All Palestinians have been focused on Hamas’ internal elections, which started Feb. 3 in Gaza and ended with Yahya Sanwar at the head of Hamas’ political bureau in Gaza.

Sanwar succeeds Ismail Haniyeh, who is competing to replace Khaled Meshaal as the political bureau head at home and abroad. Meshaal’s term will expire in late March.

Sanwar, 55, is one of Hamas' most prominent military leaders since its inception in 1987. He was arrested by Israel in 1988 for setting up Hamas’ security apparatus, and he was sentenced to four life terms in prison. He was released as part of the 2011 prisoner swap deal, under which 1,027 prisoners were freed in exchange for Hamas releasing Israeli soldier Gilad Shalit.

Sanwar served in top Hamas leadership positions and has been a member of its political bureau since 2012, coordinating between Hamas’ political bureau and military wing, the Izz ad-Din al-Qassam Brigades. Sanwar was in charge of the dossier related to the Israeli soldiers captured by Hamas in the 2014 war.

Salah al-Bardawil, a member of the new Hamas political bureau in Gaza, told Al-Monitor, "Sanwar is a patriotic leader with extensive experience in political action. He is keen on reaching reconciliation with Fatah and enhancing ties with Egypt. He will leave a significant positive impact, because he is not new to politics, as he served as member of the movement’s leadership body and representative of prisoners in Israeli jails. Hamas remains unchanged even when its leaders are reshuffled.”

He added, “Palestinians did not get to know Sanwar closely, as he does not have many media appearances, but he will in the upcoming period. Israel is trying to undermine Hamas’ strategy by raising fear of Sanwar and underestimating his leadership capacity. Sanwar’s access was determined by Hamas’ grass roots under the bylaws. The focus should not be made on his character without considering the electoral process that brought him to the leadership.”

On Feb. 13, Israel Hayom described Sanwar as being smart and intransigent, in addition to being head of Hamas’ hawks. It linked his election to the outbreak of war in Gaza. Yedioth Ahronoth reported Feb. 13 that he is pushing for the capturing of Israeli soldiers so they can be freed in exchange for Palestinian prisoners. Haaretz reported Feb. 13 that he believes in an eternal war against Israel and seeks major Israeli concessions in the next swap deal. Maariv, however, reported Feb. 14 that an upcoming Israeli battle to bring down Hamas rule in Gaza could make him less enthusiastic.

This analysis may indicate that Israel is not satisfied with Sanwar’s election. This is why the Israeli Embassy in Washington said Feb. 13 that the United States had added Sanwar to the international terrorists list.

Husam Dajani, an expert on Hamas affairs, told Al-Monitor, “The controversy ignited following Sanwar’s triumph is due to the fact that his victory means the radical current within Hamas now has the upper hand in Gaza as opposed to the pragmatic camp, which failed in the last election. Although decisions within Hamas are taken through consultations, the talk on internal currents is objective and the impact of Sanwar’s victory on the overall Hamas policies is uncertain. The Gaza political bureau represents six of the 18 members of the executive committee that lead Hamas at home and abroad. Its political structure and critical decisions are raised at the Shura Councils.”

Sanwar’s victory raised debate among Palestinians, some of whom supported it. They consider Hamas to be a resistance movement that should be led by a commander with a military background. Others opposed it, due to Sanwar’s detention background governed by harsh security practices.

Ahmed Yousef, a former political adviser to Haniyeh, told Al-Monitor, “The outcome of Hamas’ elections shows that its central decision and leadership institutions may be transferred to Gaza, given its military and organizational importance and Hamas’ undisputed ruling authority there. The situation outside Gaza, however, may revert to what it was prior to the assassination of Ahmed Yassin, the founder of Hamas, in 2004, to be limited to media and relief activities.”

Meshaal said Feb. 15 that Sanwar's victory is proof of democracy within Hamas and that democracy is a part of its inner vitality that pushes its men toward leadership. He called for disregarding talk about a change in Hamas policies.

Sanwar’s deputy Khalil al-Hayya said Feb. 15 that Hamas has its own elected leadership, adding, “We refuse to discriminate between our leaders.”

Mahmoud al-Zahar, a member of Hamas’ political bureau, said Feb. 14 that those members of the military wing winning the elections are members of the movement’s leadership, such as Sanwar and Marwan Issa, a leader of the al-Qassam Brigades. He denied talks about a coup, conflict within the movement and the military wing’s control over the political wing.

Izzat al-Rishq, a member of Hamas' political bureau in Qatar and a close associate of Meshaal’s, told Al-Monitor, “The Izz ad-Din al-Qassam Brigades is a large institution within Hamas, which has assumed a strategic role in resisting the occupation, represented at the movement’s different leadership levels, and abides by its decisions. There is no conflict between Hamas’ politicians and military staff. The movement has its leadership, which is represented by its political bureau. In turn, this bureau represents the movement’s political and military formations, which abide by the leadership decisions. None of these formations is able to monopolize decision-making or impose their own opinions.”

Remarkably, following Sanwar’s victory, there were repeated talks on Hamas’ willingness to promote ties with Iran, which have worsened since 2012. Hamas’ military apparatus insists on preserving ties with Iran, as Iran is an important source of financial and military support.

Maj. Gen. Wasef Erekat, a Palestinian military expert and former commander of artillery forces for the PLO, told Al-Monitor, “Sanwar’s election shows that Hamas’ grass roots appreciates the warriors’ positive role during the Israeli wars on Gaza between 2008-2014. Sanwar, however, needs to make his perception more comprehensive by expanding consultations with Hamas’ politicians, although he still has a knack for the military field commanders and remains inclined toward restoring alliance with Iran.”

It is probably too early to make a judgment on Sanwar’s leadership, away from the prejudices and the talk about him being a hard-liner with a military mindset. Presiding over the movement may be different from taking up a leadership position along with other leaders, which may prompt him to redouble efforts to dispel concerns over his election at home and abroad and manage ties with Israel more carefully.