Will Hamas respond to leader's assassination?

Hamas is still considering its options on how to respond to the assassination of its military leader, Mazen Faqha, which was blamed on Israel. 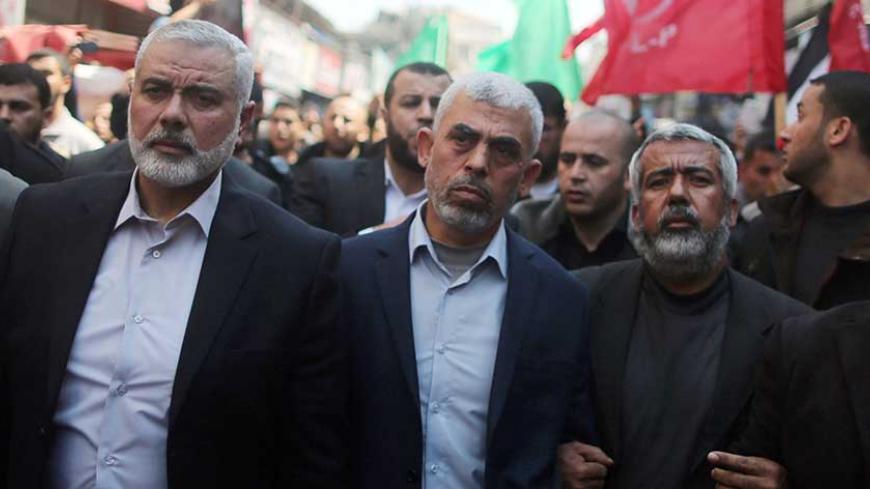 Ever since unknown gunmen assassinated Hamas military leader Mazen Faqha on March 24, the movement has been threatening to retaliate against Israel, which it accused of being behind the assassination. Threats came from inside and outside of the Palestinian territories, from both political and military leaderships. The Palestinians have been expecting revenge actions, but this has yet to happen.

On April 10, sources from the special committee investigating Faqha’s assassination told Palestine Now that it had concluded its work and it would hand over its final report to Hamas' leader in Gaza, Yahya Sinwar. The special committee has arrested Faqha’s killer and is in the process of conducting an investigation with him in preparation for trial, according to the sources.

On March 27, Khaled Meshaal, the head of Hamas’ political bureau, said Israel was challenging Hamas by assassinating Faqha, and the movement’s political and military leaderships have accepted this challenge.

Hamas' strong positions may have led the Palestinians to believe the movement would harshly respond to Israel to prevent another assassination, which is why many Palestinians called on Hamas to avenge Faqha.

Al-Monitor contacted several Hamas spokespersons both inside and outside of the Palestinian territories to find out the nature of discussions within Hamas and ask whether it will avenge Faqha’s death soon or wait, and whether or not talks about internal disputes were accurate.

Hossam Badran, a Hamas spokesman and former Hamas military commander in the northern West Bank, who was a close associate of Faqha, told Al-Monitor, “As Palestinians, our conflict with Israel is an open battle. Hamas is managing the conflict as a comprehensive project, and it does act based on emotional reactions. As a wise movement, we do not resort to revenge. We do not seek war; we seek our rights. We are united, and we bear the responsibility of any decision we take both inside and outside of the Palestinian territories. This is not the first time Israel targets our leaders at home and abroad, and there are no internal disputes between political and military leaders over our response to Faqha’s assassination.”

Abdul Sattar Qassem, a professor of political science at An-Najah University in the West Bank city of Nablus, told Al-Monitor, “Hamas may refrain from retaliating. This is because the movement might be unable to bear the consequences that may result from its potential actions against Israel, which may either start a war against the Gaza Strip or launch an assassination campaign against Hamas leaders [in response to any revenge action on the part of Hamas]. This is why Hamas may seek a retaliation action that Israel might respond to rationally without firing rockets.”

Hamas may seek revenge outside of Gaza for fear of getting into a fierce war with Israel, but a review of its expected responses suggests that the movement in the West Bank is under security surveillance from both the Palestinian Authority (PA) and Israel, which are constantly dismantling Hamas cells there.

Meanwhile, Hamas finds it difficult to attack Israeli targets outside of Palestine for fear of being sanctioned by the countries where it chooses to carry out its operations. It has previously declared that its conflict with Israel is geographically confined to Palestine as stated by Sami Khater, a member of Hamas’ political bureau, in an official work document issued by the Al-Zaytouna Center for Studies and Consultations in Beirut in July 2015.

However, others see otherwise. Political analyst Hamza Abu Shanab, who is close to Hamas, said in December, “The conflict between the Palestinian resistance and Israel may go beyond Palestinian borders, and Israel could be surprised by a retaliation outside of Palestine.” Abu Shanab’s statements came after Hamas accused Israel of assassinating Tunisian engineer Mohammed Alzoari in Tunisia on Dec. 15, 2016.

For his part, Palestinian expert on Israeli affairs Omar Jaara warned about expanding the conflict geographically, saying on Dec. 19, 2016, “Hamas is capable of responding to Israel outside Palestinian borders, but it cannot do so because this would violate the sovereignty of the countries where Israel has interests, and thus Hamas and its leaders risk being pursued.”

It would be extremely difficult for Hamas to target Israelis inside Israel, as such an operation requires accurate security intel, which Hamas may lack despite wanting to emulate the Popular Front for the Liberation of Palestine (PFLP). The latter assassinated in 2001 Israeli Tourism Minister Rehavam Zeevi at the Hyatt Regency Hotel in Jerusalem in retaliation for the killing of PFLP leader Abu Ali Mustafa in Ramallah months before.

A Hamas official in the West Bank told Al-Monitor on condition of anonymity, “Hamas’ quest for revenge coincides with daily arrests of its members by the PA and Israel, whose aim is to prevent the movement from forming an organizational structure capable of bringing armed operations against Israel. In addition, these arrests aim to make Hamas officials worry about prosecution and detention, instead of focusing on armed attacks.”

On March 27, Hamas put up posters of Faqha in the Gaza Strip with “You reap what you sow,” written in Hebrew, in reference to Israel.

Hussam al-Dajani, a Hamas expert and professor of political science at Ummah University in Gaza, told Al-Monitor, “Hamas’ discussions indicate that it could take in the blow it received with Faqha’s assassination because it realizes that the repercussions of a retaliation could cost it a lot. The movement is currently communicating with regional and international parties — which he did not mention — and it fears political cards would be reshuffled if it decides to retaliate. Perhaps when it executed three spies in Gaza on April 6, Hamas wanted to ease the public opinion’s tensions following Faqha’s assassination.”

Remarkably enough, Liberman announced April 2 that Israel was not responsible for Faqha’s death, claiming that it was an internal Hamas elimination. However, on the same day, al-Qassam Brigades issued a statement stressing that Israel assassinated Faqha and noted that Liberman’s words were proof that he is afraid of how Hamas might respond.

Hamas spokesman in Gaza Hazem Qassem told Al-Monitor, “Hamas and its military wing adopted a unified position after Faqha’s assassination. This crime will not go unnoticed, but only al-Qassam Brigades can determine how the response will be since [Hamas’] political leadership trusts it completely and has given it the freedom to do so.”

Talks about Hamas possibly avenging Faqha’s assassination coincide with the movement’s internal elections and the ensuing restructuring of its institutions.

On April 11, the London-based Al-Hayat newspaper cited anonymous Hamas officials as saying that the movement’s new political document — to be issued before the end of April — could represent a major leap in Hamas’ political orientation and gives it access to the regional and international communities. According to the sources, the document would reportedly include Hamas’ acceptance of a State of Palestine based on the 1967 borders. The document would also say that Hamas is fighting the Zionist occupation and not the Jews as a religious group.

This is why it may be preferable to wait before retaliating, despite internal calls for the need to respond so Israel would not dare carry out another assassination.