Will Hamas respond to assassination of military leader?

Hamas is blaming Israel for the killing of military commander Mazen Faqha but is waiting on a commission of inquiry before announcing any response. 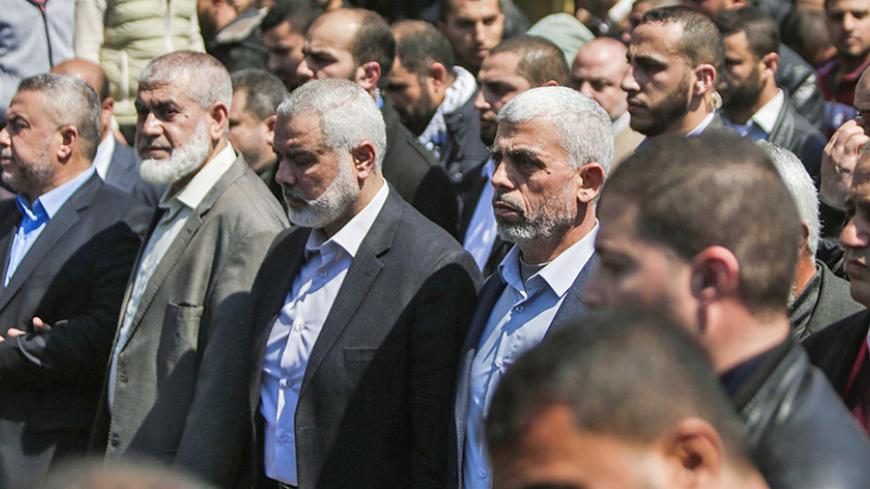 Mazen Faqha, a senior member of the armed wing of Hamas, was shot and killed on March 24. In Gaza, the prevailing view is that Faqha, who was freed from an Israeli jail in a 2011 prisoner exchange deal with Hamas, was assassinated by a unit of undercover Israeli soldiers. Israel had held him responsible for activating terrorist cells in the West Bank. A preliminary investigation suggested the killers used silencers, leading senior Hamas officials to suspect that he was not shot by “enemies from within,” but by Israelis.

Faqha was killed in the area of Tel al-Hawa, known as the “Hill of Winds,” a short distance from the Gaza coast. The location suggests the killers arrived from the sea, landed on the beach and with the help of local collaborators ambushed Faqha. Hamas decided to close off the Erez crossing from Gaza into Israel, preventing Palestinians from leaving the Gaza Strip until it could ensure that the collaborators had not fled.

In the past, when Hamas accused Israel of some mysterious explosion or other in Gaza, Israel was quick to issue an official denial of playing a role. This time, Israel neither confirmed nor denied involvement in Faqha’s assassination. Its silence could be interpreted as a tacit admission of guilt.

If Israel did, in fact, wipe out Faqha, it undoubtedly used a different modus operandi from previous assassination operations. Hamas founder Sheikh Ahmed Yassin, for example, was killed in March 2004 by a missile fired from an aircraft at him while his security guards were rushing him around in his wheelchair. His successor, Abdul Aziz Rentisi, was killed three weeks later by a rocket fired from the air at him while he was in his car.

As far as we know, only one previous Israeli assassination in Gaza was not carried out from the air. Engineer Yahya Ayyash, a bomb maker thought to be responsible for the killings of dozens of Israelis, was killed in January 1996 after his phone was booby-trapped by Israeli agents. The daring and sophisticated operation resulted in a wave of terror attacks by Hamas suicide bombers, who blew themselves up on buses throughout Israel, leading to the deaths of hundreds of Israelis and the collapse of the Israeli-Palestinian Oslo peace accord. It also had repercussions for the elections held later that year in Israel. Acting Prime Minister Shimon Peres lost to Benjamin Netanyahu because most Israeli voters were unwilling to put up with a peace process tainted by the blood of terror victims.

In the wake of the Ayyash assassination, Hamas decided that each such action would trigger a violent reaction. Over the years, every time Israel killed one of its top people, the movement’s armed wing retaliated with a barrage of rockets fired toward Israeli communities in the south. Mahmoud al-Zahar, one of the movement’s top leaders in Gaza, has told Al-Monitor in the past that the organization had decided to conduct reprisals for every Israeli assassination to maintain mutual deterrence and make the Israelis think twice before harming its people.

The 2012 assassination of Ahmed Jabari, then-commander of Hamas' military wing, was the catalyst for the launch of Israel’s Pillar of Defense operation in Gaza later that year. Hamas was unwilling to abandon its policy of retaliation, despite knowing that such actions were dragging Israel into a full-scale military confrontation that would result in extensive loss of life.

The question now is how Hamas will respond to Faqha’s killing. Will it ignore the shooting because its leaders fear another armed clash with Israel at this point? And if it does nothing, how will the movement’s new Gaza boss explain it? Yahya Sinwar could be perceived by the militant heads of the armed wing as a weak leader who doesn’t keep his promises.

In an interview with Al-Monitor, one of the armed wing’s leaders said on condition of anonymity the organization has no doubt that Israel was behind Faqha’s assassination and that its fingerprints were clear. He said Hamas had set up a panel to investigate the sequence of events and it would soon submit its conclusions. Hamas considers the team of inquiry important not just to find out how the killers reached Gaza without being detected by scouts, but even more so to expose the locals who abetted Israel.

From an operational standpoint, establishing an investigative team provides the heads of the political and military wings time to carefully weigh their actions. That Faqha was not killed by a projectile fired from an aircraft means that Israel is not immediately incriminated and Hamas need not take immediate action to prove to the Palestinian people that it has not abandoned its ideological power base — its jihad against Israel.

Since its founding, Hamas has taken care to preserve its image in the eyes of its Palestinian constituency as the leader of the jihad against Israel and especially as an organization that never gives up in the face of adversity and crises. “No surrender” was and is the Hamas slogan, which its leaders shout at the top of their lungs at every mass rally in Gaza.

A professional team of inquiry conveys to the Palestinian public that the movement’s leaders have sound judgment and will not drag the Gaza Strip into yet another deadly round of violence before the facts are clear and solid conclusions are drawn.

If Israel did, indeed, decide to assassinate Faqha from the ground rather than by using an airborne weapon without endangering the lives of its fighters, it would seem that consideration was given to maintaining the status quo with Hamas, leaving its leaders an out.

And still, the most pertinent question remains — what motivated Israel, if this was in fact its handiwork? A hint was provided last week by Nadav Argaman, the head of the domestic Shin Bet security service, who told the Knesset’s Foreign Affairs and Defense Committee on March 20 that the calm with Hamas was illusory and not a day goes by that Hamas does not try to carry out a terror attack against Israel. Argaman assessed that during the upcoming Passover holiday in April, these efforts would intensify. Faqha was in charge of operating terror cells in the West Bank and that, in all likelihood, explains it all.