A senior Hamas military operative, Mazen Faqha, was shot near his home in western Gaza, with Israel being the main suspect behind the assassination, raising concerns about a fourth war in the Gaza Strip. 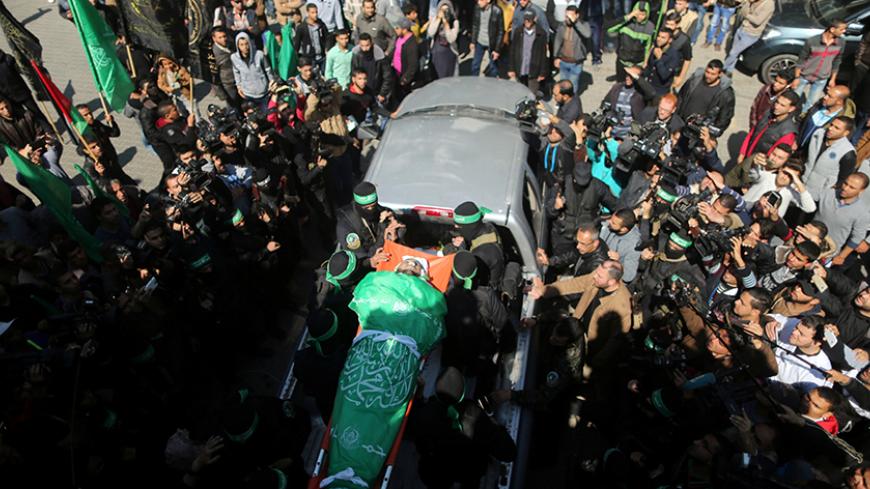 In March, security tensions in the Gaza Strip reached their highest since the end of the 2014 war, amid an exchange of rocket fire, Israeli maneuvers along the borders, and Israeli warnings that the cautious calm could end.

The situation escalated on March 24 when unknown gunmen assassinated Mazen Faqha, a former prisoner and commander in Hamas’ military wing, Izz ad-Din al-Qassam Brigades, in the Tal al-Hawa neighborhood west of Gaza City. Four shots were fired into his head and chest from a silencer-fitted gun, killing him instantly.

Hamas was shocked by Faqha’s assassination for several reasons. First, Faqha was a prominent military leader — and after his death al-Qassam Brigades put up pictures on its website depicting him carrying out training in the Gaza Strip. Second, the assassination took place in the heart of Gaza, Hamas’ stronghold, where the movement brags about maintaining a stable security situation. Third, Faqha was shot at close range, while previous Israeli assassinations were executed by airstrikes. Those responsible remain at large.

Between 2002 and 2014, Israel killed several Hamas operatives in airstrikes, most prominently Ahmed Yassin, the movement’s founder, and other senior leaders such as Abdel Aziz al-Rantissi, Salah Shehadeh, Adnan al-Ghoul and Ahmed al-Jabari.

Hussam Badran, Hamas’ spokesman residing in Qatar, former Hamas military commander in the northern West Bank and one of Faqha’s comrades, told Al-Monitor, “Israel is the only one benefiting from this assassination. It is the one behind it. This is an Israeli-style assassination par excellence. We are well aware of Faqha’s role as a senior commander of al-Qassam Brigades, and there is no need to go into details. This is why Israel put him on its assassination list as it has repeatedly declared him responsible for attacks in the West Bank.”

Faqha is considered one of the most prominent leaders of al-Qassam Brigades in the West Bank. Israeli security services accused him of planning the 2002 suicide attack in the city of Safed, in northern Israel, which claimed the lives of nine Israelis and injured 40 others. Back then, Israel sentenced Faqha to nine life terms in prison.

In 2011, Faqha was released in a swap deal with Hamas. But Israel exiled him to Gaza given the threat he posed in the West Bank. Faqha then worked in the Gaza Strip on establishing a military infrastructure for al-Qassam Brigades, and he opened an office in Gaza to activate the armed cells in the West Bank to conduct bloody operations, according to Israeli accusations.

Hamas and its leaders did not hide their anger at the assassination. Hamas’ most prominent members of its political bureau arrived hours after the assassination to Al-Shifa Hospital to bid Faqha farewell, namely Yahya Sinwar, Ismail Haniyeh, Mahmoud al-Zahar, Khalil al-Hayya and Fathi Hamad.

However, Israel has yet to claim or deny responsibility for the assassination, but the heavy Israeli media coverage of the incident, and the statement made by Defense Minister Avigdor Liberman on March 26 about a new policy against Hamas, may hint at responsibility, especially since Israel had always accused Faqha of planning armed attacks in the West Bank.

On March 22, Israel’s Shin Bet revealed that, according to their intelligence information, Hamas is planning to conduct a wide-scale operation in Israel during the Jewish holiday of Passover in April.

A Palestinian security official in the West Bank told Al-Monitor on condition of anonymity, “The Palestinian Authority is following up on the Israeli warnings that Hamas might conduct revenge acts in response to Faqha’s assassination during the Jewish Passover. But we will not allow the West Bank to turn into a scene where accounts are settled between Hamas and Israel.”

In this context, Hisham al-Moghari, a Palestinian security expert and dean of the faculty of security sciences at Al-Awda University College in Gaza, told Al-Monitor, “Faqha’s assassination is a security operation par excellence, during which Israel was easily able to assassinate him, although he was a military commander who carried a weapon. It was able to do it near his home, on a relatively busy street. It seems that the assassins, who might be Palestinian spies, caught Faqha off guard and the latter was unable to fight them back. They killed him and immediately fled the scene without leaving a trace behind.”

Saleh al-Nuaimi, a Palestinian expert on Israeli affairs, told Al-Monitor, “I believe Israel would have been glad if Faqha were assassinated by Palestinian spies, but such a risky operation requires great professional and combat skills, which are hard to find in a Palestinian spy. It is more likely that an Israeli unit carried out the assassination after spies provided them with some intel about Faqha’s movements.”

In the absence of accurate information about the attackers, Palestinians have been discussing how such an unprecedented operation could succeed and how those responsible — if they were Israelis — were able to enter and leave Gaza. This is particularly intriguing since Hamas controls the Gaza Strip and announced March 26 that it closed all of its land and sea crossings to prevent the attackers from leaving Gaza, noting that it would only open them for exceptional humanitarian cases.

Mushir al-Masri, a spokesman for the Hamas parliamentary bloc in the Palestinian Legislative Council, told Al-Monitor, “Israel will pay for Faqha’s assassination, and its attempt to change the rules of the game with the resistance in the Gaza Strip will fail, because executing an assassination on Gazan territories is a dangerous move.”

Faqha’s assassination coincided with Israeli maneuvers March 19 near Gaza in southern Israel, which may imply that Israel was taking precautions against a Hamas response. However, the movement has yet to respond to Faqha’s assassination, although its leaders have threatened to retaliate. Khaled Meshaal, the head of Hamas’ political bureau, said March 27 that Faqha’s assassination indicates that Israel has changed the rules of the game with the resistance and that Hamas’ political and military components have accepted the challenge, noting, “A war is a struggle; we kill them and they kill us back,” in reference to the Israelis.

Al-Qassam Brigades issued a statement the morning of March 25, saying it would break the Israeli equation in Gaza, which it described as a quiet assassination. The brigades also threatened Israel, saying it will regret even thinking about assassinating Faqha.

Hamas is well aware that if it were to respond to Faqha’s assassination traditionally by firing rockets at Israel, a fourth war would erupt, which the movement may want to avoid — at least for now — in light of Gaza’s harsh economic conditions. However, if it refrains from responding to this hard blow, Israel might dare carry out more assassinations, which would put Hamas in a tough spot, as Palestinian Hamas supporters insist on the need to respond harshly against Israel.

Sari Arabi, a Palestinian author specializing in Islamic movements, told Al-Monitor, “Faqha’s assassination is part of an open conflict between Israel and Hamas. War between the two is ongoing, even if grand battles are postponed. Israel is preparing for war, and this is why it has been recently carrying out maneuvers along the Gazan border, in a pre-emptive move for a possible Hamas response.”

In the same context, Maj. Gen. Wasef Erekat, told Al-Monitor, “An in-depth study should precede any response to the assassination. Israel might want to lure the resistance into a war, which requires coordination between factions to set a unified strategy to respond with.”

Despite Hamas' eagerness to avenge Faqha’s assassination, it might not favor a major war with Israel. Perhaps the movement knows that a fourth war would be even more violent than previous ones, which is why it might resort to executing armed attacks in the West Bank or return to suicide bombings inside Israel. Hamas may also opt for attempting sniper operations against Israeli soldiers and officers on the Gazan border. However, neither Hamas nor Israel can guarantee that their reactions would not produce a new war.