Outgoing Hamas leader Khaled Meshaal has vowed to avenge the killing of military leader Mazen Faqha; this may provoke Hamas into another round of violent conflict with Israel. 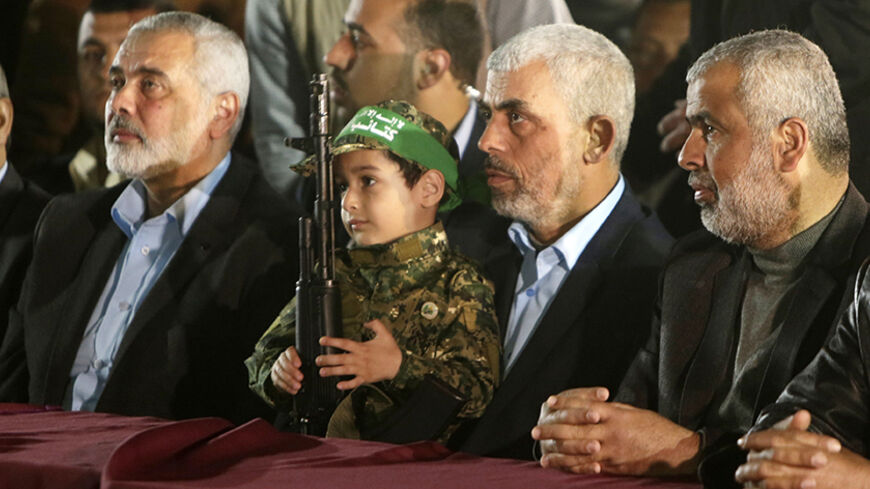 Yahya Sinwar (2nd R), the new leader of Hamas in the Gaza Strip, and Hamas senior political leader Ismail Haniyeh (L) sit next to the son of Mazen Faqha during a memorial in Gaza City, Gaza, March 27, 2017. - MAHMUD HAMS/AFP/Getty Images

Gaza is being inundated by a flood of demands for a violent response to the assassination of senior Hamas military leader Mazen Faqha. At the same time, a bitter argument is underway between the militant and pragmatic branches of Hamas over the implications of a retaliatory operation against Israel.

Faqha, who was released from an Israeli prison as part of the 2011 Gilad Shalit prisoner-exchange deal, was responsible for setting up an operational infrastructure for Hamas in the West Bank. He was killed under mysterious circumstances March 23 near his home in Tel al-Hawa in northern Gaza. Hamas claims that a special Israeli unit infiltrated the Gaza Strip to assassinate Faqha. Defense Minister Avigdor Liberman addressed these accusations for the first time April 2, saying, “Hamas is known for its internal assassinations.” He then went on to recommend that Hamas conduct an internal investigation.

Hamas is indeed investigating. Ever since the assassination, it has conducted a far-reaching manhunt in Gaza to search for suspects. The local Interior Ministry announced that Hamas security forces had taken into custody several people suspected of collaboration with Israel, and that they will soon be brought to trial for treason and assisting the enemy in wartime.

Motivation among Hamas activists to respond to Faqha's assassination intensified after a March 27 video speech that Khaled Meshaal, the outgoing head of Hamas’ political bureau, delivered to a demonstration in Gaza's al-Katiba Square, in the presence of all of Hamas' political leadership. "The conflict with the occupier [Israel] remains open. The military and political leadership of Hamas is ready to meet the occupier's challenge," Meshaal said.

Soon after the demonstration, Gaza was plastered with posters quoting Meshaal and promising retaliation. The leaders of the movement did not even hide what form the anticipated retaliation would take. In a sermon this weekend, Ismail Haniyeh, who is slated to take over for Meshaal as head of the political bureau, said, "Revenge for Faqha's assassination will not end by settling accounts with the people who carried out the killing. We will also reach the people who sent them." He went on to warn that the blood of Hamas activists is not cheap, and that there will be severe repercussions for the assassination.

Haniyeh was hinting at something that a Hamas video distributed via social networks said openly. The movement would avenge itself in an action targeting the heads of Israel's security establishment, depicting them in crosshairs in the video. These included Chief of Staff Gadi Eizenkot, Mossad director Yossi Cohen, Shin Bet director Nadav Argaman, former head of military intelligence Aviv Kochavi and Oz Brigade Commander Col. David Zini. Another web video listed Israeli targets overseas, including ambassadors.

A senior Israel Defense Forces (IDF) officer told Al-Monitor on the condition of anonymity that Meshaal's comments have sent Hamas into a dizzying spiral, which could result in another round of violence. These calls for a response and the "challenge" posed by Meshaal have led to a debate between the various factions, and it is not clear how it will end. According to the IDF officer, senior members of the group indeed tried to act with discretion immediately after the assassination to put things in the proper perspective — even without abandoning the possibility of retaliatory action. But ever since the speeches by Meshaal and Haniyeh, "Hamas is rushing down a slope, which could end in disaster as far as they are concerned."

Al-Monitor has learned that there has been a bitter debate within Hamas over the last week, pitting the movement's hawkish and pragmatic wings against each other. The question is what the implications will be for Gaza in general and Hamas in particular if the military wing does launch a retaliatory operation in response to the assassination. Top activists may boast that they can strike at the leadership of Israel's security establishment, but the fact is that if they really plan to meet Meshaal's challenge, they won’t be able to do it directly from the Gaza Strip. Instead, they will probably have to use the same terrorist infrastructures that Faqha established in the West Bank and launch the operation from there.

This is not the first time that members of the pragmatic wing of Hamas have claimed that Meshaal, who does not live in Gaza, has issued orders to activists in the Hamas military wing without having to deal with the cost or any other implications that these orders might have on Gaza. One Hamas member told Al-Monitor on condition of anonymity that Meshaal got Gaza entangled in a war with Israel before. The Hamas member mentioned Operation Cast Lead (December 2008-January 2009), which took place while the political leadership of Hamas was based in Damascus. Meshaal prodded the military wing to embark on a conflict, which ended with hundreds of casualties and thousands more wounded, while delivering a severe blow to Gaza's infrastructure. A few weeks after that bloody conflict, senior Hamas members Ghazi Hamad and Ahmed Yousef traveled to Syria to blame Meshaal and the other members of the political bureau for the consequences of that war. These two leaders of the pragmatic wing of Hamas told the political bureau explicitly that it had brought disaster on the movement.

Once again, the leaders of the pragmatic wing of Hamas have serious criticism of Meshaal, but it is limited to carefully worded remarks during internal discussions among the movement's leadership. They warn that if Hamas trades discretion for an especially violent attack, all of its most recent efforts to achieve reconciliation with Egypt, such as quiet along the border crossings, would be lost.

The Israeli security source also said, "Now that Meshaal is about to complete his term as head of the Hamas political bureau, he doesn’t care about leaving a trail of chaos in Gaza, since he will not have to bear the cost." According to him, now that he is about to leave office, the Hamas leader stands to benefit from another round of violence in Gaza. It would be considered the grand finale of his term, while his successor would be left to deal with the consequences.