While Israel tries to prevent attempts by Hamas and other groups to perpetrate attacks during the Passover period, officially Israel did not take responsibility for the killing of Hamas military branch senior operative Mazen Faqha. 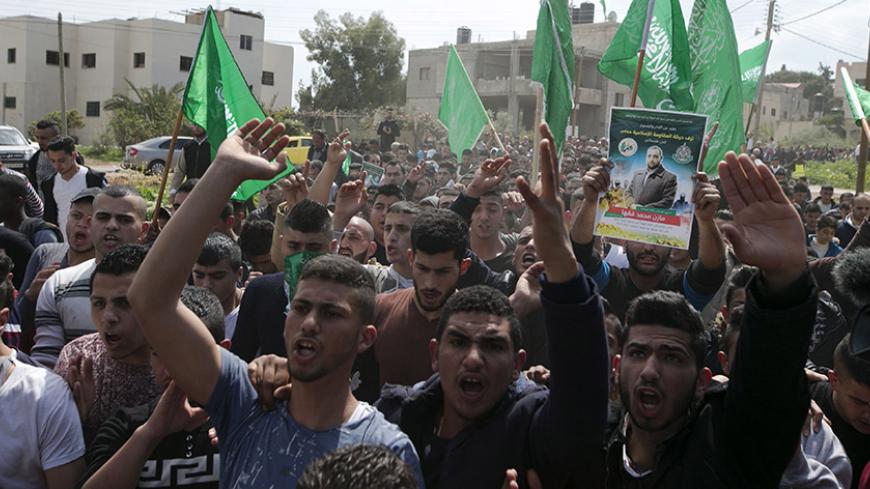 Palestinian supporters of Mazen Faqha, who was shot dead by unknown gunmen in the Gaza Strip a day earlier, march during a demonstration in the West Bank village of Tubas, March 25, 2017. - JAAFAR ASHTIYEH/AFP/Getty Images

No one in the Gaza Strip remembers anything quite as embarrassing as this. On March 24, Mazen Faqha returned home from a night on the town with his wife and children. He dropped them off and then took his car to an underground parking lot. His body was found a short while later, right next to the car, with four bullets in his head, shot from a pistol with a silencer. Hamas immediately shut the Erez border crossing and ordered Gaza's fishermen not to set out for sea until further notice. Meanwhile, Hamas security forces took up positions along the border with Israel and at the crossings, hoping to catch the assassination squad responsible for Faqha's death as it tried to leave Gaza.

Their efforts ended in disappointment. No one in Hamas doubts that Israel was behind the assassination. The current assessment by Hamas is that it was carried out by a team that entered the Gaza Strip by sea, after collecting high-quality intelligence. The assassins knew everything about Faqha's movements in real time, even that he would be alone in the garage. They killed him quietly and then disappeared without leaving a trace.

No one can remember a similar incident in Gaza. Israeli assassinations generally take place from the air or involve remote controlled missiles. Densely populated Gaza has always been considered volatile and dangerous. In other words, no sane intelligence organization would send a hit squad into it. Well, that is no longer the case. The Israel Defense Forces has many elite units such as Matkal and Shayetet 13, which are able to get in and out of Gaza without anyone noticing. The team behind the operation seems to have received a steady flow of intimate, high-quality intelligence, leaving Hamas stumbling about in the dark.

Israel has not assumed responsibility for the operation. Instead, it is maintaining absolute silence. Nevertheless, all the other players in the Middle East are convinced that this was Israel's doing. Just days before the assassination, on March 20, Director of the Shin Bet Nadav Argaman told the Knesset's Foreign Affairs and Defense Committee that as Passover approaches (April 10-17), Hamas is expected to intensify its efforts to launch attacks in Israel or the West Bank.

Faqha, who was released in the 2011 prisoner-exchange Shalit deal, is part of a small task force that answers to Istanbul-based Salah al-Arouri. It has one main task: launching terrorist attacks within Israel proper through the remaining Hamas cells in the West Bank. Gazans link Faqha's death to those statements by the Shin Bet head. It was not an act of vengeance in response to any of Faqha's past activities, which included a brutal suicide bombing of an Israeli bus in 2002. Instead, it seems to have been an attempt to thwart future attacks.

Faqha's father, who lives in the village of Tubas in Samaria, claims that over the past few months, Israeli figures sent warning messages to his son through him. After being released in the Shalit deal, his son was exiled to Gaza as part of a program used by Israel to minimize the damage from releasing terrorists convicted for murder. They were released to the Gaza Strip, rather than to the relatively open territories of the West Bank. The obvious disadvantage of this procedure was the accumulation in Gaza of Hamas members intimately familiar with the West Bank, with local Hamas activists and with the movement's dormant field cells. Faqha was the most prominent of these. According to intelligence sources, he was controlled by Arouri as part of an ongoing effort to launch terrorist attacks. Arouri himself has recently changed his modus operandi. He has been trying not to coordinate terrorist attacks from Turkish territory. Instead, he has been spending his time wandering the Middle East, mainly the Gulf states, where he feels that he has greater freedom of movement. On March 24, he lost his most experienced and determined operative in Gaza.

If this really was an Israeli operation, it signals a new strategic development. When it came to Hamas in recent years, Israel allegedly operated much as it did with its bombings in Syria over the past few years, as reported by foreign news outlets. It proceeded in such a way that Hamas would be able to contain the strike and practice restraint. This was a low signature operation, essentially different from an aerial assault. If Israel had used its air force to assassinate Faqha, it would have been a blunt declaration of war. In contrast, by killing him this way — if Israel really was behind it — Israel is providing Hamas with an opportunity to remain calm and stick to the rules of the game that have emerged between the two parties.

The response from Hamas is disconcerting. Rather than cooperating with the ambiguity strategy by "launching an investigation," Hamas spokesmen immediately accused Israel of being behind it and said Faqha would be avenged. It seems as if they were insinuating an attack on a senior Israeli official, but Jerusalem was not particularly jolted by the threat.

Insofar as possible, Israel's objective is to prevent a Hamas attack during the approaching Passover holiday without igniting the entire region. Recently, it has been making preventive arrests in the West Bank just about every night.

Arouri's activities have caused considerable frustration among Hamas field activists, as almost everyone that Arouri has tried to recruit for some terrorist operation found himself in an Israeli prison within a short time, even if that person didn't really take any action. This Israeli approach of arresting anyone suspected of contacts with Hamas operators — known as the "lawn mower" — enables Israel to keep Hamas terrorism in the West Bank on a low burner, if it even exists at all. This is all the more frustrating for Hamas.

Regardless, even if Hamas' efforts to relaunch terrorist activities within Israel are thwarted, it is obvious to both parties that they are locked in a spiral that will lead to another round of violence sooner or later.

Ram Ben-Barak is a former deputy director of the Mossad and now the director general of the Ministry of Intelligence. He told Al-Monitor, "It is possible to prevent the next round of violence in the Gaza Strip. The reality of life in Gaza is very harsh. Hamas is trapped in a dead end and trying to break out of it. Right now, life in Gaza is just about intolerable. Instead of waiting for the next round, which will end with new understandings, I would recommend sitting down today to see what can be done to create some kind of new horizon, which would be worthwhile to work toward, for Gaza's benefit. It is important to release some pressure and improve the economy."

Ben-Barak's comments echo similar opinions that have been published by Al-Monitor, including opinions by senior officials such as Chief of Staff Gadi Eizenkot, Defense Minister Avigdor Liberman and the Coordinator of Government Activities in the Occupied Territories Maj. Gen. Yoav Mordechai. The problem is that despite all their statements, nothing tangible has been done on the ground. That's why even if Faqha's assassination is an important Israeli tactical success — if such is the case — the basic strategic situation remains exactly the same, with everyone waiting for the next round.