The assassination in southern Tunisia of Mohammed Alzoari, a Tunisian engineer and member of Hamas, stirred calls for the Tunisian government to investigate Israel, which was accused of being behind the death. 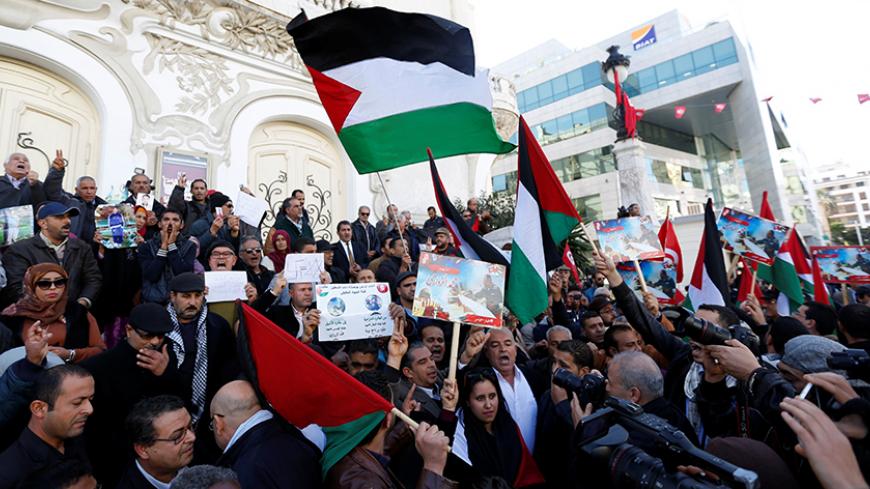 Tunisians gather in front of the Municipal Theater during a protest against the assassination of Tunisian national and member of Hamas Mohammed Alzoari, Tunis, Dec. 20, 2016. - REUTERS/Zoubeir Souissi

The city of Sfax in southern Tunisia woke up Dec. 15 to the news of the assassination of Tunisian aeronautical engineer Mohammed Alzoari, 49, who was gunned down in his car in front of his house.

During a press conference Dec. 20, Tunisian Interior Minister Hedi Majdoub said, “Foreign agents were behind the assassination of Alzoari due to his involvement in scientific projects and his regional engagements [relations].”

The pertinent question, however, is how will the Tunisian state deal with the involved assailants?

Israel has yet to make an official statement vis-a-vis Hamas’ accusations, except for the brief comment by Israeli Defense Minister Avigdor Liberman, quoted by the Israeli national radio (Arabil) when he responded to a question about the incident during the Bar Association conference in Tel Aviv Dec. 21.

“If someone was killed in Tunisia, he is not likely to be a peace activist or a Nobel Prize candidate. Israel is doing what needs to be done to defend its interests,” Liberman said.

Although Israel did not officially admit to being involved in this crime and Tunisia did not point a finger at it, some signs suggest that the Mossad’s prints are all over the operation. In this context, one ought to stress the fact that Alzoari was designing unmanned aerial aircrafts for Hamas and also belonged to the movement. Alzoari’s killing is akin to the assassination of Mahmoud al-Mabhouh, another leader in al-Qassam Brigades, in a hotel in Dubai in January 2010, which also raised speculations about the Mossad’s involvement in the incident.

Alzoari’s assassination raised much controversy, furor and public anger in Tunisia, as thousands took to the streets demanding the Tunisian government retaliate and pass a law criminalizing normalization with Israel.

The Tunisian government issued a statement Dec. 18, saying that the “state is committed to track down the assailants behind the assassination of Alzoari at home and abroad with all legal means and in accordance with international conventions.”

For his part, Tunisian Prime Minister Youssef al-Shahed announced Dec. 22 that he had dismissed the governor of Sfax and the head of security in the area south of Sfax where the assassination took place.

Political analyst and writer Mohamed Bettaieb told Al-Monitor, “The Tunisian government can only respond in one way, which is to file a violation complaint to the UN Security Council against Israel for violating its sovereignty. This is what Tunisia did in the wake of the Israeli raid on the Palestinian Liberation Organization [PLO] headquarters in Hammam Chott, near Tunis, on Oct. 1, 1985, which killed 50 people and wounded 100 others. Back then, the UN Security Council condemned the Israeli operation, which was dubbed Operation Wooden Leg, considering that Tunisia had the right to appropriate reparations.”

In Alzoari’s case, however, “Tunisia does not possess sufficient evidence against the Mossad to take the issue to the Security Council. Any complaint to the council should be based on a thorough legal file with clear grounds and sufficient evidence, which is the responsibility of the Tunisian security services to carry out,” Bettaieb added.

In the same vein, Tunisian Foreign Minister Khamis Alaghinawa said during a parliament session Dec. 24 that his ministry “is awaiting the outcome of the security investigations commissioned by the public prosecution in order to proceed with the necessary steps to start pursuing the agents involved in the assassination. The ministry has started through its diplomatic missions to monitor anything that would help its investigations, be it statements, acknowledgements or any other relevant information.”

Alaghinawa added, “Tunisia is in contact with the Palestinian Authority, which has promised to provide all the data available in relation to the issue and the necessary evidence and documents to track down the involved assailants.”

For his part, Bettaieb said, “It is true that the Tunisian government has little room to retaliate at the international level, but it can take steps at the domestic level that could serve as an indirect response to the crime. Most importantly, the government could pass a law criminalizing all forms of normalization with Israel and promote a political, economic and cultural boycott against it.”

Tunisia has had diplomatic and economic relations with Israel since 1996, but they came to a halt in September 2000 following the Al-Aqsa intifada in Palestine.

Journalist Nizar Makni told Al-Monitor, “The assassination of Alzoari has revealed the lax security system in Tunisia. The government’s response to this crime must be through tighter security measures against any foreign breaches.”

Tunisia needs strong and conclusive evidence to indict the Mossad in Alzoari’s assassination and to condemn Israel internationally, which is the furthest Tunisia can go.

This is not the first time the Mossad has carried out an assassination in Tunisia. In April 1987, Tunis witnessed the assassination of Khalil al-Wazir, known as Abu Jihad, who was the PLO’s No. 2 man. He was killed at the hands of a group of Mossad agents who infiltrated across the sea into his home in Sidi Bou Said. In 1993, the Tunisian authorities managed to dismantle a Mossad-affiliated cell in the PLO headquarters, led by a Palestinian diplomat called Adnan Yasin.

The supporters of the Palestinian resistance, parties and organizations in Tunisia are calling for severing ties with Israel through the passing of a law criminalizing all forms of normalization with it. This is knowing that the Popular Front for the Liberation of Palestine had set forth a draft law in 2015 to this effect, which has yet to be discussed in Tunisian parliament. The former Tunisian parliament had refused to include a chapter to this effect in the new constitution in 2014.