Who killed a Hamas engineer in Tunisia?

Israel is keeping silent over the killing of Hamas' drone designer, Mohammed Alzoari, whose sophisticated assassins left no clues to their identities. 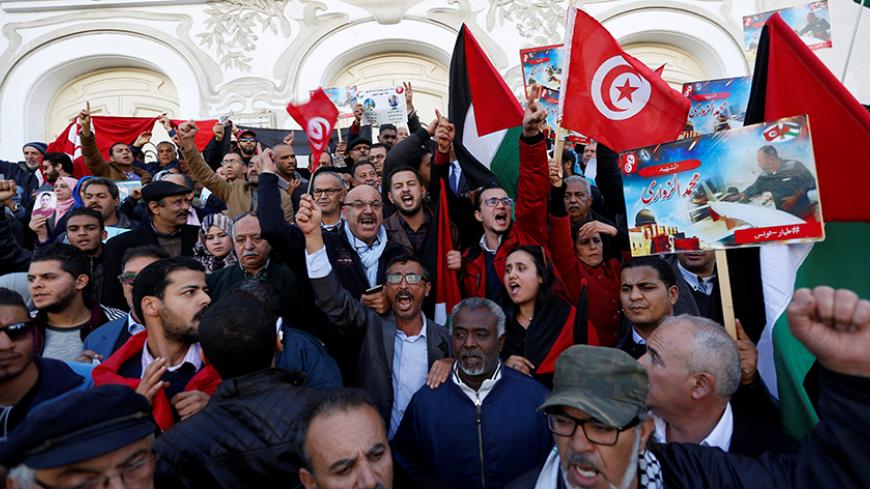 Tunisians gather in front of the Municipal Theatre during a protest against the assassination of Tunisian national Mohammed Alzoari, who Hamas identified as one of its drone engineers, in Tunis, Tunisia, Dec. 20, 2016. - REUTERS/Zoubeir Souissi

A group of unidentified assailants shot Tunisian Mohammed Alzoari as he was driving near his home in Sfax, Tunisia, Dec. 15. Alzoari was struck by a hail of bullets and died on the spot. The assailants disappeared, leaving behind cell phones, silencers and a rental car. There were no other clues that might have helped the Tunisian authorities identify them.

Alzoari was an aeronautical engineer who specialized in the manufacture of drones. For the last few years, he was employed by Hamas and Hezbollah. According to sources in Tunis, he also designed an unmanned naval vessel, apparently submersible and capable of attacking targets at sea. In an interview with a Tunisian radio station, Hamas spokesman Mosheib al-Masri said that only Israel stands to benefit from the assassination of Alzoari. Hamas placed direct responsibility on Israel for the assassination. Local newspapers reported that the Mossad had been following Alzoari for the past few weeks and was responsible for the “sterile” assassination after meticulous preparations.

On Dec. 20, five days after the assassination, Israeli Defense Minister Avigdor Liberman responded to a question about the incident, saying, “If someone was killed in Tunisia, he’s not likely to be a peace activist or a Nobel Prize candidate.”

Apart from this brief statement, Israel has been silent, as usual. Ever since the ruckus surrounding Israel’s alleged assassination of Mahmoud al-Mabhouh in Dubai in 2010 and the ensuing international scandal, Israel’s intelligence establishment has been on the defensive. Its most senior officials, including top retired officers, refuse to comment on the latest assassination in any way whatsoever. Western intelligence experts are convinced that the reports from Tunisia are correct and that the Mossad was involved. The big difference is that this time, whoever was behind the killing has adjusted to the contemporary reality, in which everything everywhere is captured on video.

Al-Mabhouh, who was in charge of weapons purchases for Hamas, was found dead in his hotel room in Dubai, apparently from a heart attack. Some two weeks after his death, the Dubai police released close-up photos and security footage that they claimed show the 33 people involved in an assassination plot. They were taken in the hotel, airports and at various events that took place in al-Mabhouh’s immediate vicinity during the final days of his life. It was discovered (so claimed the Dubai authorities) that the subjects of the photos and footage were Israeli and other foreign citizens, using aliases and forged passports.

This revelation caused a diplomatic crisis between Israel and the UK and Canada, the passports of which were forged. Mossad chief Meir Dagan was reprimanded by Prime Minister Benjamin Netanyahu. While Israel did not take public responsibility for the assassination of al-Mabhouh, the intelligence community was shaken up by speculation about the Israeli “fiasco.” Many agents from the Mossad’s legendary assassination unit were exposed by closed circuit cameras and other sophisticated security systems installed in Dubai’s airports and hotels. It was later discovered that these systems had employed Israeli technology to identify covert Israeli activities.

The Western espionage community wanted to know whether its agencies could adapt to an era in which anonymity is just about impossible, when every hotel corridor is covered by security cameras.

Based on what happened in Tunisia last week, the answer is yes. As of this writing, no security camera footage has been released. No hidden camera seems to have captured the faces of the mysterious assassins. According to several sources, the only cameras that might have captured the Tunisian assassination were sabotaged or old photos and footage were planted in them. One local journalist reported that one day before the assassination, Alzoari set up a meeting with a Hungarian journalist who arrived in Tunisia to interview him. That journalist and her team of two other people have since disappeared.

The Tunisian authorities have already concluded that foreign agents carried out the assassination, which they later dubbed a terrorist attack, but they have not named the state or group responsible for it. Based on all of these details, it is safe to assume that the group behind the Alzoari assassination learned everything it could from what happened in Dubai. Espionage agencies seem to be successfully adapting to the contemporary era, at least for now.

Meanwhile, things are heating up in Gaza. Hamas has invested considerable efforts over the last few years in an attempt to build a fleet of drones that could gather intelligence over Israel and eventually launch “suicide attacks.” Hamas has also created its own naval commando unit, which attempted a naval assault on Israel’s Zikim Beach during Operation Protective Edge, but was taken out by the Israel Defense Forces. The current assessment is that Alzoari helped Hamas develop these intelligence weapons, an especially worrisome idea considering his work with unmanned naval vessels.

Israel’s natural gas fields in the Mediterranean are particularly sensitive strategic assets and subject to special security measures. Israel invests enormous efforts in defending the gas drilling platforms from attack by rockets or other naval weaponry. An unmanned submarine could make the platforms vulnerable. Is that the reason that Alzoari was killed? Only his assassins know that.