The killing of a Syrian missile-engineer, widely attributed to the Mossad, is likely meant to serve as a message that the lives of those developing weapons against Israel are in danger. 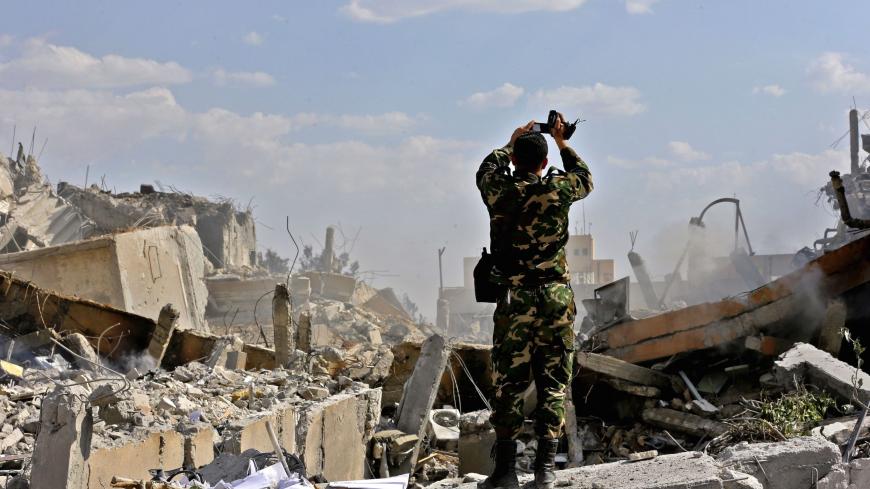 A Syrian soldier inspects the wreckage of a building described as part of the Scientific Studies and Research Center compound in the Barzeh district, north of Damascus, during a press tour organized by the Syrian information ministry, on April 14, 2018. - GETTY/Louai Beshara

It happened in the Syrian city of Hama. When Aziz Asber climbed into his car sometime during the night between Aug. 4 and Aug. 5, he had no idea that it would be the last time. The headrest of his seat exploded with an earsplitting blast, killing Asber and his driver instantly. When the smoke cleared, it was discovered that Asber was the head of Department 4 of the Syrian Scientific Research Center, an institute spearheading the Bashar al-Assad regime’s development of nonconventional weapons. Its labs in the town of Masyaf in Hama province had been bombed on numerous occasions over the past two years and sustained major damage. These bombings were attributed to Israel and its alleged decision to destroy the joint Syrian-Iranian-Hezbollah “Precision Project.” The goal of this project was to install a “kit” on Syrian and Hezbollah missiles, improving their precision considerably and thereby posing a strategic threat to Israel’s military superiority.

It now looks like Israel had decided to take matters up a notch. Sources in the Syrian regime have already blamed Asber’s assassination on the Israeli Mossad. While Israel has maintained its silence, it would be hard to find anyone in the Middle East who did not get the hint. From now on, not only are the weapons facilities in danger, but the scientists working there are as well. According to several publications in the West, the Mossad’s policy is now to deter anyone involved in the development of nonconventional weapons or any other weapons, for that matter, that might pose a threat to Israel. From now on, they bear sole responsibility for whatever happens to them.

Asber was a scientist who worked covertly and kept a low profile. His killing is reminiscent of similar incidents that happened a decade ago, such as the assassination of Hezbollah’s Chief of Staff Imad Mughniyeh in Damascus in February 2008 and of Syrian Gen. Mohammed Suleiman at his vacation villa in the town of Tartus in August of that year. While Israel has said nothing about those attacks, various publications in the West have placed responsibility on it, and especially on late Mossad chief Meir Dagan.

To this day, the killing of Mughniyeh is considered one of the Mossad’s boldest and most resounding attacks. The Hezbollah chief of staff lived his life under a thick veil of secrecy. There were hardly any pictures of him, and no one actually knew where he was at any given moment. Mughniyeh slept in a different bed every night. He never remained in the same place for longer than two days, and he was fully aware that he was in the crosshairs of both Israel and the United States. The very fact that someone actually knew exactly where to find him in downtown Damascus that late at night and was able to install an explosive device in his car left the central Hezbollah headquarters in Beirut’s Dahieh neighborhood in a state of shock. It’s probably worth noting that Mughniyeh also was killed when the headrest in his car blew up.

The story of Suleiman’s assassination is even more intriguing. He was killed one year after the destruction of Syria’s nuclear reactor in Deir ez-Zor in 2007. An American investigation into the killing, which was released by whistleblower Edward Snowden, attributes the attack to Israel’s naval commando unit. Suleiman was the person closest to Assad. He was Assad’s confidante, responsible for Syria’s nuclear project. If he was, in fact, killed by Israel, it signaled that Israel would not make do with destroying facilities that manufacture nuclear weapons, but would also call to account anyone responsible for establishing and developing those facilities.

In some sense, Asber is the new Suleiman. He also worked in total secrecy on a Syrian strategic weapon project and was responsible for communications about the Precision Project with both Iran’s Islamic Revolutionary Guard Corps and Hezbollah. And he was also killed in a highly covert, professional hit without anyone taking responsibility for it.

It has been two and a half years since Yossi Cohen became director of the Mossad. In hindsight, his appointment by Prime Minister Benjamin Netanyahu has been likened to a powerful shot of adrenaline to the legendary espionage organization. It is not as if the Mossad before Cohen was complacent either. On the other hand, foreign publications are under the impression that the audaciousness of the Mossad and Netanyahu as its direct commander has broken new records.

About two years ago, Hamas drone engineer Mohamed Zoari was assassinated in Tunis by two unknown assailants, who left no tracks (except for some Bosnian passports). Then, this April, Palestinian engineer Fadi Mohammad al-Batsh, who was also working on the Precision Project to enhance rockets and missiles, was killed in Malaysia by two assassins on a motorcycle. They emptied an entire clip of bullets in him before they disappeared. Early this year, Hamas activist Mohammed Hamdan got into his Mercedes in a suburb of Tyre, Lebanon, and was injured by an explosive device hidden in the vehicle. Hamdan survived. His elder brother, who is believed to be a senior member of Hamas, is also in Lebanon. While they are both alive, it is reasonable to assume that they got the hint.

Added to this list is the assassination of Mahmoud al-Mabhouh, who was killed in Dubai in January 2010. Mabhouh was in charge of strengthening the Hamas military and acquiring arms, particularly from Iran. The killing of Mabhouh was caught on security cameras and exposed by the Dubai police. Israel did not assume responsibility for this action. But if it really was the Mossad, the exposure of members of the Mossad’s assassination unit was surely perceived as a resounding failure; a stain on the otherwise almost-perfect record of Dagan, just before he ended his post.

By connecting all the dots, a very clear picture comes into focus. Israel is fighting to prevent its immediate enemies from increasing their military capabilities, with particular emphasis on Iran, Hezbollah, Syria and Hamas. It does this by land, sea and air. While the Israeli air force continues its intensive attacks on weapons convoys and deliveries, manufacturing facilities, and the storage facilities for rockets and missiles, the Mossad is focused on killing the people responsible for these systems.

While Israel does not usually take responsibility for these attacks, they have been taking place for many years now. At the peak of Israel’s struggle against the Iranian nuclear project, several Iranian nuclear scientists were assassinated, too, including some in Iran itself, and these attacks were attributed to Israel. Right now, it looks as if Israel is becoming much more confident, not only in its aerial attacks, but also in all matters pertaining to the Mossad’s offensive operations. This could be because Netanyahu himself is growing more confident or because of the extensive backing, if not encouragement, that he receives from senior US administration officials under President Donald Trump and his national security adviser John Bolton — the very kind of backing that Israel sorely lacked during Barack Obama’s presidency.