Turkey’s time running out in Idlib

Syrian Kurds could be a wild card in a possible showdown between Damascus and Ankara; Russia keeps the peace, for now, on the Israel-Syria border; Israel may have opened a new front of secret assassinations; the political economy of Iran’s protests. 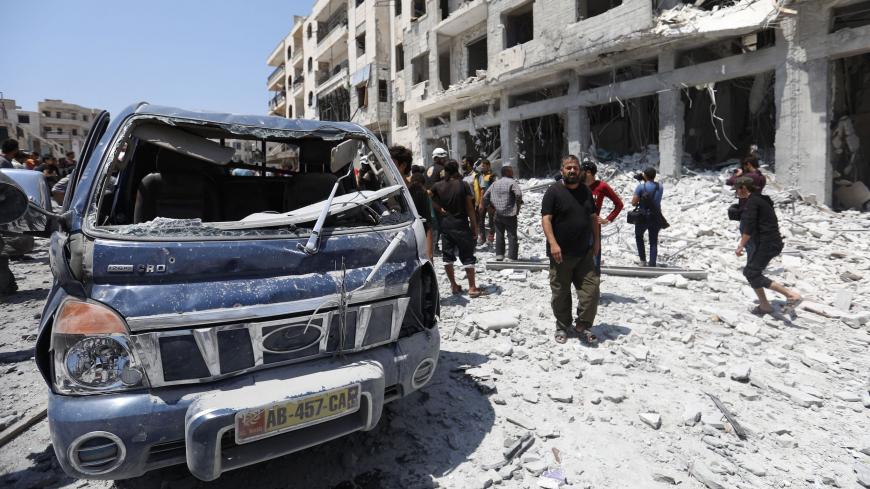 Syrians gather at the site of a car bomb in the northwestern Syrian city of Idlib, Aug. 2, 2018. - GETTY/Omar Haj Kadour

“In an ominous sign, [Syrian] regime helicopters reportedly began dropping fliers on Idlib, calling on residents to lay down their arms and collaborate with Syrian President Bashar al-Assad,” reports Amberin Zaman. “In copies shared by the Syrian Observatory for Human Rights, the leaflets say the Syrian war ‘is close to an end,’ that it's time to stop the bloodletting and that residents should join reconciliation 'as our people did in other parts of Syria.’"

“Faced with a weakening economy and sharpening popular resentment against the presence of Syrian refugees, who are perceived as stealing jobs and hogging government resources, Ankara has been scrambling to get Russia to exercise its leverage over the [Syrian] regime to delay any combative action against Idlib,” writes Zaman. “The province has become a holding pen for thousands of opposition rebels and their families evacuated from other parts of Syria, most recently Daraa and eastern Ghouta, as they fall back under the regime’s control. The al-Qaeda-linked Hayat Tahrir Sham (HTS), a rebranded iteration of the extremist militant group Jabhat al-Nusra, remains the dominant force in Idlib. …Turkey’s efforts to lure away enough 'moderate' fighters from the group to trigger an eventual fracturing and dissolution of it have yet to materialize.“

“Turkey maintains 12 observation posts around Idlib to separate Syrian government forces and the various armed groups in Idlib. As Russia and the United States see things, Idlib is ‘Turkey’s problem’ not least because until it switched tactics in late 2015, Turkey was a top sponsor of the rebels — and allegedly of Jabhat al-Nusra as well. In the event of a regime offensive the Turks would have to withdraw or face the risk of getting caught in the middle of the carnage,” adds Zaman.

The Syrian Kurdish People’s Protection Units (YPG) “began tentative talks with Damascus in July in the hope of eventually reaching some form of accommodation that would, among other things, grant Syria’s long oppressed Kurds a say in their own affairs,” Zaman writes. “That is a long way off, given the regime’s resistance to any loosening of its administrative grip. The optimal result for now would be securing regime assistance in restoring logistical services, including water and electricity, in the broad swath of northeastern Syria that is under YPG control.”

“Military cooperation in Idlib, however, could pave the way for a similar effort to force Turkish forces out of Afrin. The mainly Kurdish enclave was invaded by Turkish troops and their Syrian rebel allies in January and has remained under their control since. Aldar Xelil, a top Syrian Kurdish official, told the Russian press in July, ‘Our forces are ready to take part in an operation to liberate Idlib.’ Noting that there were Kurds in Idlib, Xelil continued, ‘Idlib is under occupation by terrorist groups supported by Turkey. Freeing this city is our duty as Syrian citizens.’”

“Russia is continuing efforts to enforce an agreement designed to stabilize the situation at the border between Israel and Syria,” writes Nikolay Kozhanov. “Under the agreement, Iranian forces and their proxies are pulling back from southern Syria in exchange for Damascus' resumption of control of the Syrian-Israeli border and Israeli recognition of Syrian President Bashar al-Assad’s authority over Syrian territory according to the 1974 borders. … Russia also moved to deploy its military police at the Golan Heights frontier between Syria and Israel and plans to set up eight observation posts in the area.”

“The agreement on southern Syria implies concessions and gains for all sides, which makes it unique — but hard to sell in the rest of Syria,” Kozhanov continues. “Russia guarantees that Iran won't control Syria's border with the Golan Heights. Nevertheless, the agreement also deprives Israel of a pretext to launch airstrikes against the Iranians and their allies deep in Syrian territory. Thus, Moscow prevents weakened Iranian proxies in other parts of Syria, where their presence is important to allow the Assad regime to wage war against the opposition. The Kremlin also gets Israel's blessing to re-establish control over the opposition's territories in the south, weakening the opposition and eliminating the area where the alternative government to Damascus could be established by external forces. Finally, Russia defused tensions between Iran and Israel that might have negatively affected the situation in Syria and puts Israel in a situation where it has to recognize Assad as Syria's legitimate ruler.”

The assassination last week of Aziz Asber, head of Department 4 of the Syrian Scientific Research Center, which reportedly is focused on the development of nonconventional weapons, may be a sign of a new front by Israel’s Mossad against its enemies.

“Sources in the Syrian regime have already blamed Asber’s assassination on the Israeli Mossad,” writes Ben Caspit. “While Israel has maintained its silence, it would be hard to find anyone in the Middle East who did not get the hint. From now on, not only are the weapons facilities in danger, but the scientists working there are as well.”

“By connecting all the dots, a very clear picture comes into focus. Israel is fighting to prevent its immediate enemies from increasing their military capabilities, with particular emphasis on Iran, Hezbollah, Syria and Hamas. It does this by land, sea and air. While the Israeli air force continues its intensive attacks on weapons convoys and deliveries, manufacturing facilities, and the storage facilities for rockets and missiles, the Mossad is focused on killing the people responsible for these systems,” explains Caspit.

“While Israel does not usually take responsibility for these attacks, they have been taking place for many years now. At the peak of Israel’s struggle against the Iranian nuclear project, several Iranian nuclear scientists were assassinated, too, including some in Iran itself, and these attacks were attributed to Israel. Right now, it looks as if Israel is becoming much more confident, not only in its aerial attacks, but also in all matters pertaining to the Mossad’s offensive operations. This could be because Netanyahu himself is growing more confident or because of the extensive backing, if not encouragement, that he receives from senior US administration officials under President Donald Trump and his national security adviser John Bolton — the very kind of backing that Israel sorely lacked during Barack Obama’s presidency,” Caspit concludes.

The political economy of Iran’s protests

Bijan Khajehpour explains the political economy of the protests in Iran. “Interest groups with access to government licenses have taken advantage of these licenses to enrich themselves and feed corrupt networks, as reported by Al-Monitor,” Khajehpour writes. “Such behavior is to the detriment of the public interest.”

“While the foreign exchange differential remains one of the main sources of corruption,” Khajehpour continues, “the structural deficiencies in the banking sector that facilitate the illegitimate shifting of wealth from the society to special interest groups is another problem. Iran's financial sector has been characterized by extremely high interest rates in the past three decades, in most years hovering around 15-20% for long-term bank deposits. In addition, various types of credit and financial institutions were in the past decade allowed to offer higher rates, which translated into annual interest rates of up to 26%.”

“In the past few days, the government has introduced a new set of foreign exchange policies aimed at introducing more stability to the market. The most important aspect is recognition that the government and the CBI should stop manipulating the open currency market. The re-legalization of the operation of foreign exchange bureaus will also play a constructive role, as there are many groups that do not get currency allocations from the official exchange rate as well as the secondary currency market. That Iran will now have a three-tiered exchange rate system, however, will further feed corrupt networks,” Khajehpour warns.