UN reaches out to Ankara as Assad coils around Idlib 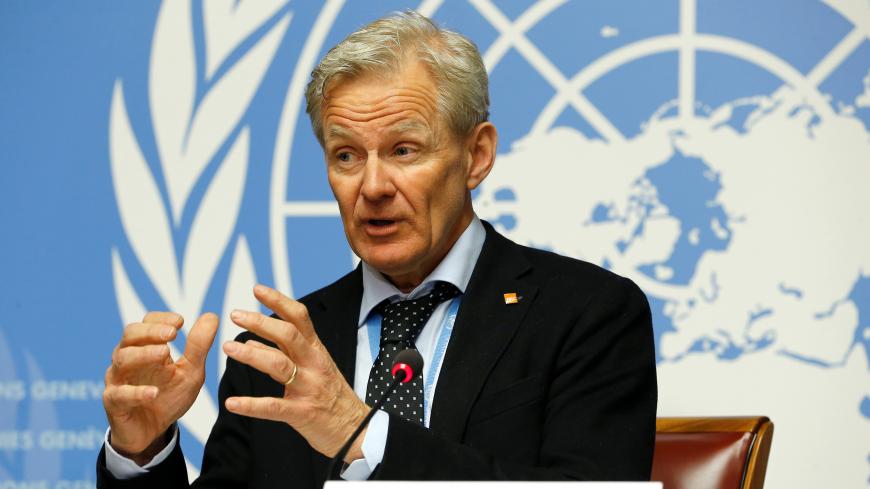 Jan Egeland, adviser to the United Nations’ special envoy for Syria, said the body will ask Turkey to keep its borders open for civilians to flee in the event of a regime offensive against Idlib, a rebel-held province on Syria’s northwest border with Turkey. Egeland warned the offensive could propel some 2.5 million people toward Turkey, which is already host to over more than 3.5 million Syrian refugees.

Egeland’s appeal came amid news that Russian Foreign Minister Sergey Lavrov will be traveling to Turkey on Aug. 13-14 for meetings with his Turkish counterpart, Mevlut Cavusoglu. The main topic of discussion is expected to be Idlib.

Egeland said, “Russia, Iran and Turkey told a meeting of the Syria humanitarian task force on Thursday that they would do their utmost to avoid a battle that would threaten millions of civilians in opposition-held Idlib.”

In an ominous sign, regime helicopters reportedly began dropping fliers on Idlib, calling on residents to lay down their arms and collaborate with Syrian President Bashar al-Assad. In copies shared by the Syrian Observatory for Human Rights, the leaflets say the Syrian war "is close to an end," that it's time to stop the bloodletting and that residents should join reconciliation "as our people did in other parts of Syria."

The province has become a holding pen for thousands of opposition rebels and their families evacuated from other parts of Syria, most recently Daraa and eastern Ghouta, as they fall back under the regime’s control. The al-Qaeda linked Hayat Tahrir Sham (HTS), a rebranded iteration of the extremist militant group Jabhat al-Nusra, remains the dominant force in Idlib.

Turkey’s efforts to lure away enough “moderate” fighters from the group to trigger an eventual fracturing and dissolution of it have yet to materialize. The lack of progress is in part because “Turkey has been preoccupied with its fight with the Kurds in Afrin, partly because it has hedged amid the lack of international buy-in and probably, too, because HTS leaders can only go so far without jeopardising their grip on the movement,” the International Crisis Group observed in a recent report.

Faced with a weakening economy and sharpening popular resentment against the presence of Syrian refugees, who are perceived as stealing jobs and hogging government resources, Ankara has been scrambling to get Russia to exercise its leverage over the regime to delay any combative action against Idlib. Faced with the backlash, in February, Turkey's President Recep Tayyip Erdogan spoke of sending the Syrians back home. "With around 3.5 million unemployed Turkish citizens and double-digit inflation, many people see the refugees as an economic burden," wrote Gonul Tol, the founding director of the Washington-based Middle East Institute's Turkey program. She called Syria "Erdogan's Achilles heel."

But the clock is ticking. Hediye Levent, a Beirut-based Turkish analyst who has covered the Syrian conflict since it erupted in 2011, said time is running short for Turkey. “Russia told Turkey in the latest Astana meeting that it's time to do ‘something concrete’ to get the jihadists in al-Nusra, in HTS, to disband, disarm and surrender before September,” Levent said in an interview with Al-Monitor. The alleged September deadline has been echoed in the Arab media.

By “Astana,” Levent was referring to the mechanism established by Turkey, Russia and Iran last year in the Kazakh capital to set up so-called de-escalation zones that would pave the way for cease-fires and humanitarian corridors. In practice it has resulted in deals, brokered by the Astana players and rammed through by heavy regime bombing, that have allow the latter to reassert control.

Idlib, where Turkish troops man 12 separate observation points separating the rebels from regime forces, is the stickiest of all. As Russia and the United States see things, Idlib is “Turkey’s problem” not least because until it switched tactics in late 2015, Turkey was a top sponsor of the rebels — and allegedly of Jabhat al-Nusra as well. In the event of a regime offensive the Turks would have to withdraw or face the risk of getting caught in the middle of the carnage.

Levent said Turkey had been issued a September deadline by Russia to prevail over the jihadis, and if it can’t, to aid in the battle against them. “The rational thing for Turkey would be to keep its borders tightly sealed so as to prevent the jihadis from escaping to Turkish territory.” Levent added that her own sources in Damascus had indicated that if Turkey were to not take part in the campaign, the Syrian Kurdish People’s Protection Units (YPG) would be invited to participate instead.

The Syrian Kurdish group began tentative talks with Damascus in July in the hope of eventually reaching some form of accommodation that would, among other things, grant Syria’s long oppressed Kurds a say in their own affairs. That is a long way off, given the regime’s resistance to any loosening of its administrative grip. The optimal result for now would be securing regime assistance in restoring logistical services, including water and electricity, in the broad swath of northeastern Syria that is under YPG control.

Military cooperation in Idlib, however, could pave the way for a similar effort to force Turkish forces out of Afrin. The mainly Kurdish enclave was invaded by Turkish troops and their Syrian rebel allies in January and has remained under their control since. Aldar Xelil, a top Syrian Kurdish official, told the Russian press in July, “Our forces are ready to take part in an operation to liberate Idlib.” Noting that there were Kurds in Idlib, Xelil continued, “Idlib is under occupation by terrorist groups supported by Turkey. Freeing this city is our duty as Syrian citizens.”