Talks in Geneva between Turkey, Russia and Iran will discuss the establishment of a constitutional committee for Syria, but diplomatic efforts could be torpedoed by developments in Idlib. 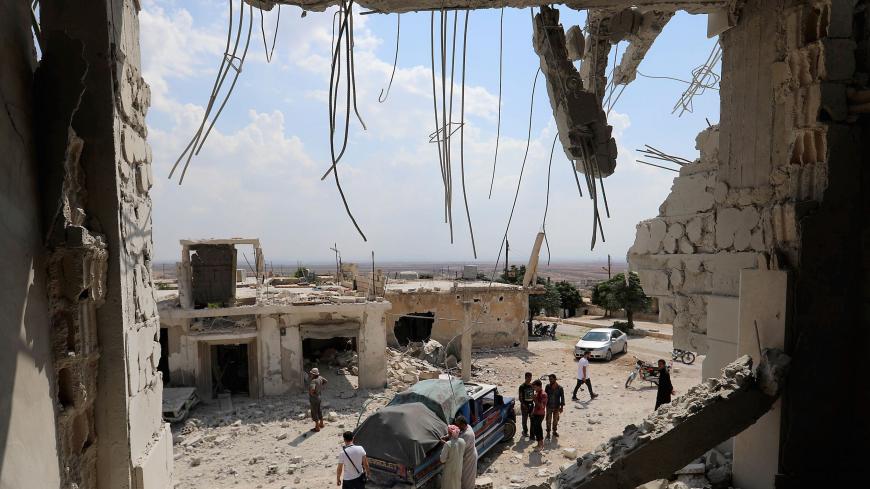 The destruction after bombing by government forces in the town of Al-Habit on the southern edges of the rebel-held Idlib province is seen in this image taken Sept. 9, 2018. - GETTY/Omar Haj Kadour

The United Nations' special envoy to Syria, Staffan de Mistura, began talks in Geneva today with officials from Turkey, Russia and Iran to discuss the establishment of a constitutional committee for Syria, part of a Moscow-led effort to include opposition groups in a negotiated solution to the seven-year Syrian conflict. The talks are expected to last two days. De Mistura is due to meet with envoys from Egypt, France, Germany, Jordan, Saudi Arabia, the United Kingdom and the United States on Friday.

The UN official said the aim is to set up a Syrian-led and Syrian-owned constitutional drafting body, paving the way for new elections.

Turkey’s President Recep Tayyip Erdogan said on Friday, “Establishing and making this committee — which is on the agenda thanks to the Astana process — will bring a new dynamism to the political process.”

Turkey, Russia and Iran are the co-sponsors of the Astana process to deconflict the rebels and Syrian regime forces that the trio insists is meant to bolster, not compete with, stalled UN-sponsored peace talks in Geneva to end the war. As the International Crisis Group noted in a recent report, “Without participation by a minimally credible opposition, Russia will struggle to deliver a political resolution with even a veneer of inclusion and consensual legitimacy.” Turkey’s influence over the opposition is seen as key in this regard.

But diplomatic efforts could be torpedoed by developments in Idlib, the opposition rebels’ last stronghold where the al-Qaeda-linked Hayat Tahrir al Sham (HTS) remains the dominant force.

Should the regime and Russia press ahead with a full-scale assault on Idlib, Erdogan’s perceived inability to defend against the operation would likely limit his sway over the opposition. Worse, it could make Turkey a target of the jihadis, even as they are targeted themselves.

Footage of a man said to be an Eastern Ghouta rebel threatening Erdogan made the rounds on social media, offering a bleak reminder of the risks that may ensue. The man, who is filmed standing in front of what he claims is a tunnel opposite Turkey’s concrete border barrier with Idlib, says, “If you sell out Idlib, this is your wall and that’s our tunnel. We’ll be in Reyhanli in less than two hours.”

The reference to Reyhanli, a town in Turkey’s border province of Hatay, will have had a chilling effect. Reyhanli was scene to a massive car bomb attack on May 11, 2013, that left at least 51 people dead. Turkey blamed the twin explosions on Syrian intelligence. Turkey’s main opposition Republican People’s Party contested this version, saying it was carried out by Jabhat al-Nusra, the al-Qaeda-linked group that folded into HTS. On March 27, 2014, Turkey’s ambassador to the Organization for Security and Co-operation in Europe, Tacan Ildem, appeared to confirm this, saying the Reyhanli attack was carried out by “al-Qaeda elements operating out of Syria.” The Turkish Foreign Ministry issued a hasty rebuttal.

A full-scale regime offensive would likely propel tens of thousands of people to seek refuge in Turkey, among them jihadis and their families relocated to the province from other parts of the country over which the regime has won back control. The United Nations' new humanitarian chief, Mark Lowcock, warned today that a large military operation could create the “worst humanitarian catastrophe with the biggest loss of life in the 21st century.”

Turkey’s hand seems weaker following a Sept. 7 gathering of the Astana leaders in Tehran. Russia’s President Vladimir Putin disdainfully rebuffed Erdogan’s appeals to call for a cease-fire in Idlib. Iran’s President Hassan Rouhani sided with Putin, saying, “Fighting terrorism in Idlib is an unavoidable part of the mission of restoring peace and stability to Syria.”

Erdogan struck a bullish tone en route home from Tehran, telling reporters on board the presidential jet that talks with Putin over Idlib would continue and that the two leaders could meet again in the coming weeks. A process to lead the militants to lay down their weapons would bear fruit, he predicted.

Stretching about 130 kilometers (80 miles) along Turkey’s border, Idlib remains critical to Turkey’s ability to shape events in Syria. Hasan Basri Yalcin, the director of the Turkish think tank SETA, told the pro-Turkish Sabah that Idlib is “extremely important for Turkey’s security. But at the same time, it is an irreplaceable stepping stone for Turkey’s forward operations in Syria.” Yalcin went on, “An Idlib that is not allied with Turkey could become a strategic threat.”

The consensus among many experts on the Syrian conflict is that the regime and its allies will move against Idlib regardless of the human cost. For Turkey, that may well mean having to withdraw the estimated 1,300-plus troops it has deployed along 12 observation points in Idlib to separate regime and opposition forces under the terms of the Astana compact. Fabrice Balanche, a French academic who has followed Syria for many years, told Al-Monitor, “The Syrian government offensive against Idlib will take part in two phases. The first will involve retaking the south of the province and eliminating pro-Turkish rebels and pushing hundreds of thousands of people into the northern zone held by HTS.”

Balanche argued that this phase would not cause many casualties because “the civilians can flee and the pro-Turkish rebels are not very brave combatants. Moreover, they are very divided. Once the refugees are gathered at the Turkish border, Russia will tell the Europe and the United States, ‘We are going to eliminate al-Qaeda by force. This will trigger casualties. But we have no other choice. It's what you did in Mosul and Raqqa.’ ”

Erdogan declared in Tehran that with 3.5 million Syrians already, Turkey can’t let more in. It will thus likely redirect them to Afrin, the mainly Kurdish enclave Turkish forces invaded in March to drive out Syrian Kurdish militants known as the People’s Protection Units (YPG). Balanche maintained that the relocation of pro-Turkish rebels and their families from Idlib to Afrin had already begun, concluding, “They can be used against the YPG.”