Turkey's Erdogan gets no love from Russia on Idlib

Disagreements between the presidents of Russia, Iran and Turkey were evident at a televised meeting today as they struggled to negotiate a solution on Syria. 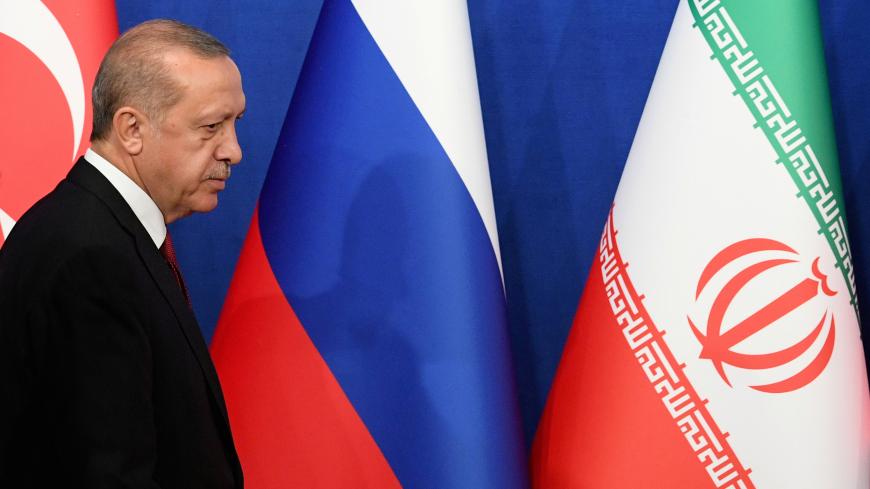 A critical summit between the presidents of Russia, Iran and Turkey to find common ground on Syria’s rebel-held province of Idlib descended into televised drama today, as Russia’s Vladimir Putin and Turkey’s Recep Tayyip Erdogan aired their differences before the cameras. On paper, the leaders reiterated pledges to seek a negotiated solution to Syria’s seven-year conflict, to preserve the country’s territorial unity, to eliminate al-Qaeda-linked terrorists and to assure the safe return of millions of displaced Syrians. But a regime attack on Idlib will likely move ahead despite Turkey’s appeals for more time to use carrot-and-stick diplomacy with the jihadis.

Even as the leaders assembled in Tehran, Syrian fighter jets pounded militant targets in the province, reported the Syrian Observatory for Human Rights, a UK-based monitoring group.

Turkey has 12 observation posts in Idlib in keeping with the provisions of the Astana process. The initiative was launched by Turkey, Iran and Russia last year to ease conditions for a cease-fire and eventual peace between the government and the rebels in designated “de-escalation zones.” In practice it has eased the regime’s bloody comeback in rebel-held territories such as Daraa and Ghouta, and now imminently in the last militant stronghold, Idlib, where the al-Qaeda-linked Hayat Tahrir al-Sham (HTS), formerly known as Jabhat al-Nusra, dominates. Several thousand Turkish troops manning the observation points will likely find themselves in the crosshairs of the assault and tens of thousands of Syrians would likely flee toward Turkey.

Erdogan said with some 3.5 millions Syrian refugees on its hands, Turkey could not take in any more. “An attack on Idlib will result in disaster, massacre, tragedy,” he warned. The Turkish leader even recited a verse from celebrated Iranian poet Saadi: “If you have no sympathy for human pain, the name of human you cannot retain.”

But Turkey failed to convince fellow leaders to insert wording for a cease-fire in the summit’s final communiqué. Erdogan’s efforts to reverse this played out live with the leaders and their delegations assembled around a giant white table as the press cameras continued, inexplicably, to roll. A stony-faced Erdogan said the final statement ought to have made a reference to a “cease-fire” because it would bolster the Astana process, ease a solution and mark a victory for the summit.

Putin icily retorted, “The armed militants are not present at our table, are not taking part in our talks. The Turkish president is right, generally speaking. It would be nice [if they declared a cease-fire]. But we cannot speak on their behalf and [even less so on behalf of] Jabhat al-Nusra, IS terrorists, that they will stop their attacks, that they will stop using their drones.” Iran’s President Hassan Rouhani could be seen smiling beatifically as Erdogan responded, “We would be making a call on Jabhat al-Nusra, on HTS to lay down their arms.”

Analysts agree that the summit did not go well for Erdogan: Kerim Has, a Moscow-based analyst on Russian and Eurasian affairs, told Al-Monitor that the gathering revealed that a joint offensive carried out by Russia-backed regime forces and Iran-backed pro-regime militias “is very near.” The level of mutual trust between Turkey and Russia is “very low,” relations remain “fragile” and Idlib will “present new challenges” to them. Finally, it showed that Turkey needs to be ready for a fresh wave of refugees and that the threat of terrorism is no longer confined to Syria and will be felt “on its own soil, up close and present.” More broadly, Has observed, “Disagreement over Idlib makes it unlikely that Russia and Turkey can agree on an extended presence of Turkish forces in Afrin, Jarablus and Azaz.”

Afrin is the mainly Kurdish enclave Turkish troops invaded with Russia’s blessings and rebel boots in March. A report from the Guardian’s Martin Chulov quoted a Kurdish leader as saying that a small number of the US-backed Kurdish Arab militia known as the Syrian Democratic Forces (SDF) — ostensibly Kurds — had made their way to join Syrian forces in the impending fight for Idlib. The quid pro quo would be regime support to drive Turkey and its rebel proxies out of Afrin. But without Russian buy-in, that would be a highly risky move. Turkey would likely retaliate against the regime and the Kurds, leading to a further and unpredictable conflagration.

Like Turkey, the United States is formally opposed to a regime assault on Idlib and Kurdish participation in it. But as Sam Heller, a senior analyst on non-state armed actors at the International Crisis Group, noted, “Despite US official rhetoric, the United States still only seems to have drawn a line at the use of chemical weapons, which — it's clear — would prompt US military action.” However, Heller added in emailed comments to Al-Monitor, “with the exception of a few stray statements, it seems not to be promising any military intervention to halt an offensive.” This suggests Turkey is increasingly isolated as it weighs its next move in Syria.

A Western official speaking on condition of anonymity said, “I don’t think the summit was ever supposed to be anything other than a stalling tactic that would distract Turkey and make it look bad.” The official added, “Putin has mastered that tactic for Syria."