Why did Putin disregard his Turkish partner? 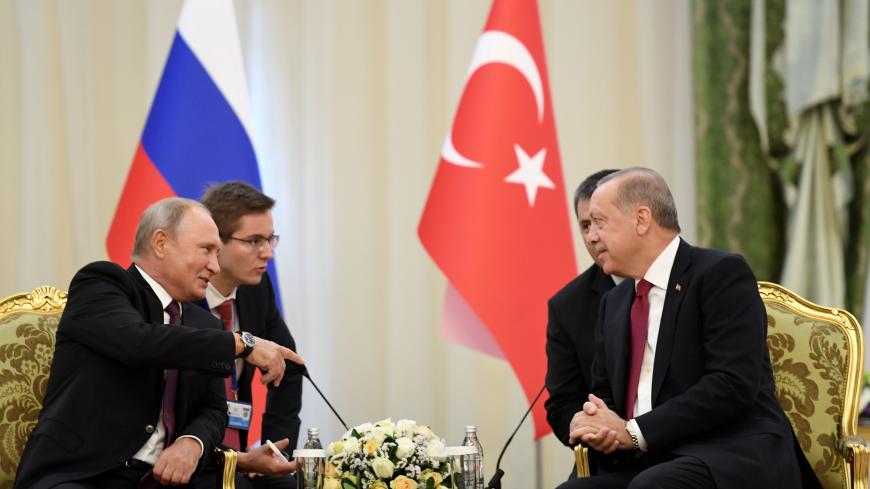 The trilateral summit in Tehran between the presidents of Turkey, Iran and Russia was one of the most unusual parades of international diplomacy yet. It was televised live. Let’s remember the scenes: All who watched it saw how Turkish President Recep Tayyip Erdogan blundered and how Russian President Vladimir Putin ridiculed him. Then it was a rare — if not unique — case of international diplomacy where a trilateral partnership considered detrimental to the interests of the West displayed signs of failure on a burning international issue.

What has had the West — the transatlantic security system — worried for some time is NATO-member Turkey’s partnership with Russia and Iran in Syria. However, the looming military campaign of the Syrian regime and Russia, with the support of Iran, to take back the jihadi haven of Idlib has begun to put the nail in the coffin of the Turkey-Iran-Russia partnership. Turkey has established 12 military observation posts in the province as part of the implementation of the Astana accord reached with Russia and Iran. And Turkey is energetically against a military operation in Idlib. So are the United States, the European Union and the United Nations.

Does this mean that the disagreement between Turkey on the one side and Russia and Iran on the other concerning a cease-fire demanded by Erdogan will steer Ankara back to the West that Turkey has been showing every sign of deserting over the past two years? No. The Tehran summit just revealed the loneliness and isolation of Turkey.

Of course, that was not the perception that the Turkish media — almost 100% under the control of Erdogan — conveyed to the Turkish public. The Turkish press was unanimous in portraying Erdogan’s Tehran performance as a victory. But social media showed Erdogan continuously tasting Iranian pistachios while the host, Iranian President Hassan Rouhani, and his Russian peer Vladimir Putin were looking statesmanlike.

Erdogan, during a speech broadcast live, seemed to have lost some of his oratorical skills — he could not construct proper sentences and could not complete any sentence without grammatical errors. Putin responded to him with a form of ridicule of Erdogan that was not concealable. The balance sheet of the Tehran summit was not good for the Turkish president.

The simple measure is what Erdogan wanted and what he got. He asked for a cease-fire in Idlib to prevent the Russian-Syrian joint assault, but did not get it. The pro-government Turkish media revealed the deep resentment and disappointment of Erdogan and his ultra-nationalist ally Devlet Bahceli vis-a-vis Putin.

The joint communique of the Tehran summit underlined a strong commitment to take military action in Idlib, thus pushing aside Turkey’s objections. The gist of the 12-article joint communique was Article 4, which says: “Reaffirmed their determination to continue cooperation in order to ultimately eliminate DAESH/ISIL [Islamic State], Al-Nusra Front [Hayat Tahrir al-Sham] and all other individuals, groups, undertakings and entities associated with al-Qaeda or DAESH/ISIL, as they have been designated as terrorists by the UN Security Council. They underlined that, in the fight against terrorism, separation between the above-mentioned terrorist groups and the armed opposition groups that had joined or would join the cease-fire regime, would be of utmost importance including with respect to preventing civilian casualties.”

Some of the wording used as a sweetener for Erdogan continued in Article 5: “Reaffirmed their conviction that there could be no military solution to the Syrian conflict and that it could only end through a negotiated political process. They reaffirmed their determination to continue active cooperation with a view to advancing the political process in consistence with the decisions of the Syrian National Dialogue Congress in Sochi and the UN Security Council Resolution 2254.”

Such sweeteners did not have any impact on the international media, which did not miss the essential point. For example, Reuters titled its news analysis “Russia, Turkey, Iran fail to agree on ceasefire for Syria’s Idlib.” The Washington Post’s headline on Sept. 7 was “High-stakes diplomacy as battle for Syria’s Idlib looms.”

Erdogan, in Tehran, emphasized the likely humanitarian disaster a military operation against Idlib would entail, quoting Iran’s immortal poet Saadi Shirazi: “If you’ve no sympathy for human pain, the name of human you cannot retain.” It did not work. Putin and Rouhani were not much concerned about alleviating Erdogan’s fears about a military offensive that could touch off more than a million refugees flooding into Turkey.

Erdogan’s abyss is not only limited to an unbearable new wave of refugees. He will be forced to confront the targeted jihadi group Hayat Tahrir al-Sham — formerly Jabhat al-Nusra, the al-Qaeda affiliate in Syria — which mainly controls Idlib province and let Turkey extend its influence.

The other Syrian opposition groups that Turkey trained and still provides financial and logistical support to are known to be adamantly against the Assad regime; if Erdogan cannot stop the advance of Russia, Iran and the Syrian regime in Idlib, the development would not only signify the end of the trilateral relationship established in Astana but the loss of Turkey’s prestige and influence with the Syrian opposition. That had become the main leverage for Turkey to project itself as an essential player in the Syrian theater. Syria, being the focal point of a conflict with a potential to shape the international balance of power, elevated Turkey and its strongman, Erdogan, to act as an essential power center, albeit with an image of playing second fiddle to Putin and Russia.

The best Putin could do for Erdogan after the Tehran summit was to direct the offensive to Idlib in stages, so his Turkish partner could gain a little more time. However, even for that, the difficulty lies in the area where Hayat Tahrir al-Sham is concentrated. The jihadi organization, with its 10,000 or more fighters, holds ground adjacent to the Turkish border from Jisr al-Shughour to the Bab al-Hawa crossing point between Syria and Turkey. It extends for 35 kilometers (21 miles) and controls the passage of humanitarian aid crossing Turkey and reaching into Idlib.

As long as the Syrian regime and its main Russian and Iranian allies are adamant about removing the jihadi element from Idlib, there are the following hard realities:

The question with no easy answer is why Putin seems committed to an act that creates disagreement with Erdogan at a time when Russia is benefiting from Turkey’s spat with the United States.

Perhaps Putin has come to the conclusion that the gap between Turkey and the West has reached an unbridgeable distance, and that he can disregard Ankara's wishes regarding Idlib because he sees that Turkey has nowhere to go in addition to being ever-more dependent on Russia and Iran for energy.