The recent Tehran summit placed a spotlight on differences between Ankara and Moscow over Syria, leaving the Turkish president rattled. 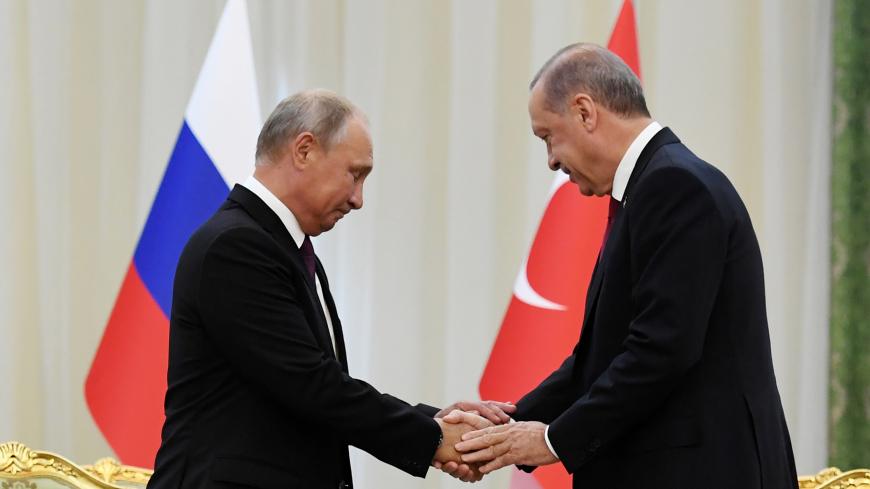 Much of the world focused its attention on the Tehran summit last week between Turkish President Recep Tayyip Erdogan, Russian President Vladimir Putin and Iranian President Hassan Rouhani, in the hope that the three “Astana partners” could prevent a bloodbath in Idlib, in northwestern Syria.

Turkish Foreign Minister Mevlut Cavusoglu issued promising statements before the Sept. 7 summit, expressing his belief that a crisis would be averted in the last opposition stronghold.

The summit not only failed to achieve this, but also highlighted Turkish and Russian differences over Syria.

This comes at a time when Ankara and Moscow are keen to highlight their burgeoning political, economic and military ties, as their relations with the United States and Europe continue to spiral downward.

The Tehran meeting underlined that the two countries are still far from having established the “strategic partnership” Cavusoglu announced during his visit to Moscow at the end of August to discuss Idlib.

Erdogan was seriously rattled after Putin abruptly rebuffed his proposal — put forward during a live broadcast from the Tehran summit — for a cease-fire by all the sides in Idlib, including jihadi groups such as Hayat Tahrir al-Sham.

This rejection left Erdogan looking like the weak link in Tehran, and also provided a reality check for Ankara regarding the limits of its cooperation with Russia in Syria.

Failing to come to terms with Washington over US backing for the People's Protection Units (YPG), a Kurdish group Turkey considers a terrorist organization, Ankara veered toward Moscow hoping to strengthen its efforts to curb Syrian Kurdish aspirations.

Although Russia had provided some leeway in the past, enabling Turkey to capture areas adjoining the Turkish border from the YPG, this came at a cost to Ankara.

To start with, its reliance on Moscow forced Ankara to accept — albeit with some insignificant protests — the Syrian regime’s Russian-backed operations against opposition forces in other parts of Syria, which produced scores of civilian deaths.

This reliance also forced Ankara to tone down its rhetoric against Bashar al-Assad, despite the loathing Erdogan feels for the Syrian leader.

Annoyed over his embarrassing failure in Tehran, Erdogan has now started to ratchet up his attacks against Assad again, which Moscow is unlikely to welcome.

In an opinion piece for the Wall Street Journal, Erdogan said that “Assad’s criminal regime” was preparing, "with the help of its allies," to "launch a massive offensive against Idlib." He added, "Our partners in the Astana process, Russia and Iran, are likewise responsible for stopping this humanitarian disaster."

Moscow, however, is giving no indication that it will defer to Ankara, and continues instead to mount airstrikes in Idlib province that have already sent tens of thousands of refugees fleeing toward Turkey, according to UN sources.

Russia also mounted operations in Idlib as the Tehran summit was going on, which enraged Ankara. In an angry tweet immediately after returning from Tehran, Erdogan said, “If the world turns a blind eye to the killing of tens of thousands of innocent people to further the regime’s interests, we will neither watch from the sidelines nor participate in such a game.”

Turkey is reinforcing its military presence along its border with Idlib. The pro-government media also claim that Turkey deployed 20,000 Free Syrian Army (FSA) fighters in Idlib, sent from Turkish-controlled parts of northern Syria. But there is little Turkey can do to prevent an onslaught against Idlib, since Erdogan is unlikely to take on the Syrian army, given the backing Damascus has from Russia and Iran, and he is equally unlikely to engage Russia in a proxy war by using the FSA.

Many on the Turkish side are beginning to feel that the Astana peace process, initiated by Turkey, Russia, and Iran in January 2017 with a view toward helping to resolve the Syrian crisis, is being used against Turkey. The process has comprised numerous rounds of negotiations held in Astana, Kazakhstan.

Many Turks argue that to date, the process has promoted the interests of Russia and Iran in Syria over those of Turkey.

Turkey set up 12 military observation posts in Idlib, under an accord arrived at in Astana, to monitor the tenuous cease-fire between the regime and the Syrian opposition in so called de-escalation zones.

The accord, however, doesn't cover groups listed by the UN as terrorist organizations — which have also swarmed to Idlib, where they control a large swath of territory.

Russia uses this as its pretext for mounting operations across the province.

He stressed that the Syrian regime’s intention in Idlib, with support from its Russian and Iranian guarantors of the peace process, was evident: “No one should kid anyone. We are agreed that radical groups have to leave, but the aim of [the regime’s] attacks is to capture Idlib.”

He was merely, and perhaps belatedly, stating the obvious, because Assad has vowed to capture Idlib and has Russian support. Moscow has also called on Turkey to hand over to Assad areas in northern Syria, most notably Afrin, that Turkey captured from the YPG. This elicited an angry response from Erdogan, who said Turkey alone would make that decision.

Despite lingering doubts, Ankara still wants the Astana process to remain active. It needs this process to have some say in efforts to hammer out a final settlement to end the crisis.

Although Erdogan and Cavusoglu are reluctant to accuse Russia directly, preferring to do this by blasting the Assad regime, media outlets close to Erdogan and the ruling Justice and Development Party (AKP) are not holding back.

For instance, Karar newspaper, which is read by relatively liberal AKP supporters, carried an analysis of the Tehran summit under the headline “Putin’s dagger.”

“Russia has one by one destroyed the de-escalations zones [in other parts of Syria] that it set up with Turkey [at] Astana, by citing the presence of ‘terrorist groups’ there. Using the same pretext, Putin has now started to strike the last de-escalation zone [Idlib], where 3.5 million people live,” the newspaper said.

Some prominent pro-government analysts who were previously enthusiastic about Turkey’s developing ties with Russia have also started to question Moscow’s motives in Syria.

Mehmet Metiner, a former AKP deputy who writes for the pro-government Star daily, argued that by continuing its operations in Idlib, Moscow is showing that it doesn’t take Turkey's sensitivities seriously.

“The Tehran summit’s results are not in line with Turkey’s expectations. No matter what anyone says, the Astana process has been harmed,” Metiner wrote, claiming that this was part of a scenario prepared in Washington.

The widespread belief among AKP supporters is that Washington is ultimately behind all of Turkey’s woes in Syria, starting with the US alliance with YPG "terrorists," while refusing to support the Turkey-backed FSA, which is considered part of the “legitimate moderate opposition.”

Veteran columnist Mehmet Barlas, another staunch Erdogan supporter, also lays the blame for Turkey’s difficulties in Syria on the United States, and the CIA in particular. He argued in an editorial for daily Sabah that Ankara must reach out to the Assad regime to extricate itself from this situation.

“We have to contribute to the Assad regime’s efforts to reform the constitution and hold elections,” Barlas wrote. “Turkey must avoid a face-off with Russia over Idlib. The way to do this is to pursue a line that supports Syria’s unity and the legitimacy of its administration,” he added.

Reaching out to Assad, however, would be the ultimate act of defeat for Erdogan in Syria. This is why he remains deaf to calls, not just from Moscow and Tehran, but also from within Turkey, to normalize ties with Damascus.

Turkey’s options in Syria are limited, though, which could push Ankara in directions that Erdogan will have no choice but to accept if he wants to have any say in efforts to end this crisis in line with Ankara’s expectations.

The bottom line is that the ties Ankara was relying on with Moscow in Syria don't look so secure now. The Tehran summit might be a harbinger of things to come as efforts to hammer out a constitution for Syria gain momentum.