Animosity toward US uniting Turkey, Russia, Iran in Syria

A loose alliance between Turkey, Russia and Iran in Syria is fraught with tensions driven by developments on the ground, but the three remain united in their desire not to provide advantage to the United States. 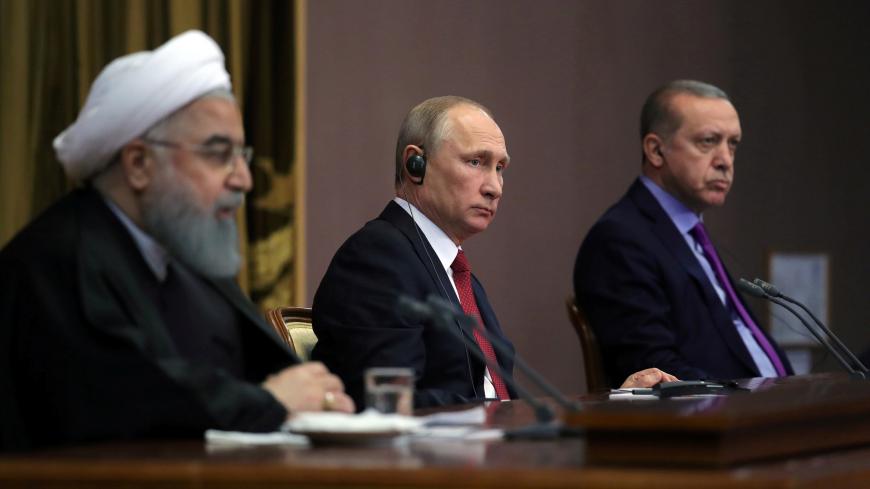 The leaders of Turkey, Iran and Russia have agreed in principle to a summit on Syria to be held in Istanbul. The decision follows recent phone calls by Turkish President Recep Tayyip Erdogan to Russian President Vladimir Putin and Iranian President Hassan Rouhani. The date is yet to be determined. Foreign ministers from the three countries will hold a preliminary meeting in Astana, Kazakhstan, in March. Given the latest developments in Syria, which require increased military coordination and cooperation among the three countries, Ankara would clearly like the summit to take place sooner rather than later.

Turkey’s Operation Olive Branch in Afrin against the Syrian Kurdish People's Protection Units (YPG), which Ankara considers a terrorist organization, and Russia’s joint operations with Syrian regime forces and Iranian-backed fighters in Idlib have caused strains between Ankara and its informal allies in Moscow and Tehran.

Attempts by the United States to consolidate its position in territories held by the YPG in northern Syria, nevertheless, remain the main motive for keeping the informal, tripartite alliance alive. Regardless of Turkey’s suspicions about long-term Russian and Iranian intentions in Syria, and vice versa, the three do not want to allow potential strains among them to work to the United States' advantage, not only in Syria, but in the region as a whole.

The Istanbul summit will therefore aim to present a picture of deepening cooperation between Turkey, Russia and Iran while devising a practical approach to preventing them from stepping on each other’s toes in Syria. Differences between Ankara and Moscow and Ankara and Tehran have recently emerged on a number of occasions, illustrating that the alliance is not made in heaven.

Idlib remains a thorn in the side of Turkish-Russian cooperation in Syria. Carefully avoiding any mention of Russian involvement there, the Foreign Ministry in Ankara blasted the Syrian regime on Feb. 7 for its operations in Idlib, as well as in Eastern Ghouta, calling for an “immediate cessation of the regime’s violations there.”

It is also no secret that Moscow is unhappy about the Syrian fighters allied with Turkey in northern Syria, whom it is bombing in Idlib. Moscow and Damascus clearly aim to rid the whole of Idlib province of radical Islamist groups as well as opposition groups backed by Ankara. An increasing number of analysts believe that the “de-escalation zone” allotted to Turkey in Idlib — under an arrangement arrived at in Astana by Turkey, Russia and Iran — is part of Moscow’s plan to facilitate this. There has been a marked increase in violence by the regime and Russia in the area since the zone was declared.

It is doubtful that Erdogan’s plans for Idlib will sit well with the Syrian regime or Moscow. He told a gathering at his presidential palace on Feb. 8, “[Turkey] will solve the Afrin issue [and] the Idlib issue, and we want that our refugee brothers and sisters return to their country.” The majority of refugees in Turkey fled from the regime.

Turkey is also wary of Russia’s ultimate intentions regarding the Kurds. Moscow might have given the green light to Turkey’s Afrin operation, but it has not endorsed it unequivocally. It instead primarily blames the United States for pushing Turkey into what it sees as a development that complicates the situation in Syria.

Kerim Has, a Turkish academic who lectures at Moscow State University, says that Moscow has not abandoned its plans for providing the Kurds political, administrative and social rights in Syria. Moscow put such a proposal forward in a draft constitution for Syria that it produced at the first Astana meeting of Turkey, Russia and Iran in January 2017, much to Ankara’s consternation.

Has also believes that Russia had an ulterior motive in green lighting Turkey's move on Afrin. Writing for BBC Turkey, he argued that the difficulties the Turkish army might face in Afrin and mounting casualties among Turkish soldiers “could become an instrument for pushing Turkey closer to Moscow’s vision regarding the Syrian Kurds.”

Reports that Damascus has been facilitating the transfer of YPG reinforcements to Afrin are being noted with concern in Ankara. Many contend that this could not happen without Russian backing.

Meanwhile, Syrian President Bashar al-Assad continues to voice his opposition to Turkey’s Afrin operation. Damascus has warned that Turkish jets will be shot down, and it recently deployed air defense systems to Idlib and Aleppo. This move, which could not have taken place without Russian approval, was clearly a warning shot at Turkey. No other country is currently conducting air operations in the area.

Russia also bolstered its air defense capabilities in the region after losing a jet fighter to ground fire from opposition forces in Idlib. Turkish media reported that Syrian airspace was closed to Turkish jets while this was underway.

The episode showed the kind of limitations Ankara’s operation in northern Syria could face barring close cooperation and coordination with Moscow. Turkish military planners of course took note of the downing of the Israeli jet by Syria on Feb. 10.

Sedat Ergin, a leading columnist for Hurriyet and a former representative for the paper in Washington, counts among those who see an ulterior motive in Russia’s green light on Afrin. “By facilitating the launch of the Afrin offensive, with which Russia knows the US would be uneasy, Russia has caused Turkey and the US to drift farther away from each other,” Ergin wrote in his Feb. 1 column.

Ankara’s ties with Tehran also hold potential problems, which if not managed could get out of hand. This became apparent after Rouhani’s call on Feb. 6 for Turkey to halt its military operations in Afrin. Rouhani, speaking to reporters in Tehran, added, “A military foreign intervention should be based on the authorization of the host country and its people,” barely shrouded criticism of Turkey’s uninvited military presence in Syria.

Rouhani’s call elicited angry responses from within Erdogan’s Justice and Development Party (AKP). Mehmet Metiner, a prominent AKP deputy, wrote in his column in the pro-government Star that Tehran must abandon its Syria policy for its own sake. “Iran has to see that a foreign policy based on sectarian blindness and fanaticism will, at the end of the day, bring its own destruction,” he wrote in response to Rouhani.

Turkish Foreign Minister Mevlut Cavusoglu flew to Iran a day after Rouhani’s remarks to assure Tehran that its concerns about Turkey’s operation were misplaced. In the meantime, Tehran is unlikely to have forgotten Erdogan’s call in Bahrain a year ago, almost to the day, for the need to prevent “Persian nationalism” from spreading in the region.

For the moment, the loose alliance of Turkey, Russia and Iran appears able to hold, despite their differences, because of shared animosity toward the United States. Whether this is sustainable in the long run is not so apparent. The potential for differences between the three countries in Syria to resurface as a result of unexpected developments on the ground should not be ignored.