Despite many rounds of talks with Washington and Moscow, Ankara has still made little headway regarding its plans for northern Syria. 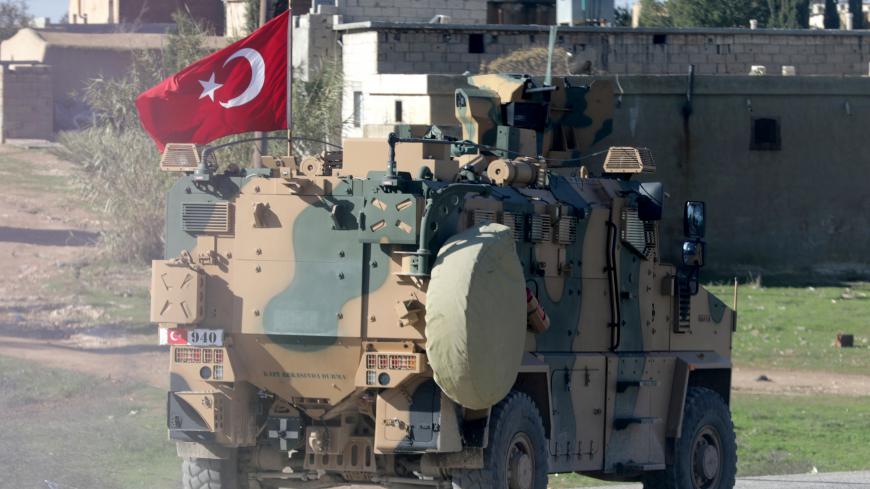 Turkey finds itself in an increasingly difficult situation on two fronts in Syria. Its key priorities have boiled down to trying to keep Russian and Syrian regime forces out of Idlib on the one hand and securing the departure of US forces from Manbij and territories east of the Euphrates River on the other.

The two topics will continue to drain Turkey’s diplomatic energies in the coming weeks and months and require subtle negotiations with the United States and Russia if Ankara is to make any headway in its plans for northern Syria.

With Washington’s determination to contain Iran and Russian plans to establish a strong presence in the Middle East by way of Syria, Ankara appears to be caught between two superpowers that it ultimately has little capacity to budge.

Despite many rounds of talks with Moscow and Washington, Ankara has still made little progress on both counts so far. Positive statements from the sides about a determination to continue working closely to overcome differences have not changed the picture much.

Reflecting his frustration with Washington, President Recep Tayyip Erdogan gave notice to America yet again this week, indicating that a Turkish military operation against the US-backed Kurdish People's Protection Units (YPG) in Manbij is near. “Our patience is not limitless. If the terrorists are not removed from Manbij within a few weeks, our waiting period will end and we will gain the right to put our own plans into action,” Erdogan told his parliamentary group on Feb 5.

He added that threats of US sanctions would not deter Turkey. Erdogan has been issuing these threats for months now, but little has changed.

Turkey says the YPG and its political wing, the Democratic Union Party, are terrorist groups and has vowed to eliminate them from northern Syria.

The feeling in Ankara is increasingly that President Donald Trump is under pressure to slow down if not reverse his decision to pull out of Syria. The official Anadolu News Agency reported this week that Washington was still sending heavy equipment to Manbij, despite Trump’s decision in December to remove US troops from Syria. It carried footage from Feb. 5 showing 400 trucks laden with electrical generators and high-mobility multipurpose wheeled vehicles entering Manbij, which is currently held by the US-backed YPG.

News of the fresh transfer to Manbij broke as Turkish and US officials were meeting in Washington to discuss their differences on multiple issues, including Syria. Little progress appears to have been made in these talks headed by Turkish Foreign Ministry Undersecretary Sedat Onel and his American counterpart, David Hale. The joint statement issued later merely indicated that the sides had expressed determination to continue to work together to achieve further progress on Syria, counterterrorism, defense matters, and judicial and consular issues.

Little progress is also being reported between the sides on plans to establish a security zone in northern Syria, which Washington has agreed to in principle and which aims to address Turkey’s security needs arising from the YPG threat. The Turkish press is reporting that Washington is pressing for this zone to be policed by an international force, which Ankara finds to be “unrealistic.”

Ankara wants the Turkish military and its Syrian proxy, the Free Syrian Army, to take control of this zone. It also wants to settle hundreds of thousands of the nearly 4 million Syrian refugees in Turkey — who have started to pose a heavy social and economic burden on the country — in settlements in this zone.

Many analysts argue that Ankara is aiming to establish a strong foothold in northern Syria in order to ultimately curb all Kurdish aspirations of some degree of autonomy in the region. The results of Turkey’s Operation Euphrates Shield and Operation Olive Branch, launched in 2016 and 2018 respectively, have provided some results for Ankara in this regard. They have, however, not been sufficient to shift the balance of power to Turkey’s advantage with regard to its broader objectives in Syria. Those objectives require that Turkey get full military control over Manbij and lands east of the Euphrates.

The United States, however, has openly expressed its opposition to a Turkish military presence in the region as well as its determination to protect the YPG against Turkish attacks.

It is not expected to change its position soon given the reportedly anti-Turkish climate that is prevalent in Washington.

Turkey is also facing serious difficulties in Idlib, where it is trying — and failing — to prevent Russian-Syrian operations there. Moscow continues to complain that the memorandum agreed upon between Erdogan and Russian President Vladimir Putin in September 2018 for Idlib is not working. According to the memorandum, Turkey — which has established a military presence in the province — was to neutralize the Hayat Tahrir al-Sham (HTS) group that Moscow and Damascus have vowed to eliminate. In return, Moscow and Damascus agreed not to stage any attacks on the province.

While not accusing Turkey directly, Russia has been saying for weeks that the Idlib accord is not being fully implemented. Moscow also says that HTS has taken control of 70% of Idlib province, prompting a resumption of Russian and Syrian strikes there.

Aware of the increasing difficulties it faces in Idlib, Ankara has started to accuse the West of supporting HTS in order to undermine the Turkish-Russian memorandum. Foreign Minister Mevlut Cavusoglu repeated this accusation — first brought up by Erdogan in December 2018 — during a meeting with Hurriyet editors last week. “I know for a fact that some Western countries are encouraging HTS and even giving it money to commit these violations in order to spoil the Idlib memorandum,” Cavusoglu said.

A Western diplomat who was asked to comment on this characterized the accusation as “defying logic.” “This reflects Ankara’s desperation in the face of the situation in Idlib that is spiraling out of control,” said the diplomat, who spoke to Al-Monitor on the condition of anonymity.

Hurriyet commentator Sedat Ergin argued that if Cavusoglu’s accusation was made by a columnist with an inclination for conspiracy theorizing, then one could approach it with suspicion. “Whichever way you look at it, this is a strong statement that has to be taken seriously. It is difficult to imagine that a foreign minister would level such a charge without strong intelligence in his hand,” Ergin wrote.

Retired Brig. Gen. Naim Baburoglu pointed out that the United States was already cooperating with the YPG, which Turkey labels a terrorist organization linked to the outlawed Kurdistan Workers Party. “It would not be exaggerating to say that the United States, which has used al-Qaeda and the Islamic State to serve its national interests, would also use the HTS against Turkey and others,” Baburoglu wrote.

Whatever the merits or demerits of this argument, it contributes little to resolving Ankara’s dilemma in Idlib.

Meanwhile, Ankara and Moscow also remain at odds over the question of a security zone in northern Syria. During his meeting with Hurriyet editors, Cavusoglu asserted that Russia was not averse in principle to the idea of such a zone. Moscow, however, has declared on multiple occasions in recent days and weeks that Syrian regime forces should move into the region once US forces pull out from there. Cavusoglu added that if regime forces were to take control over northern Syria, this would not eliminate Ankara security concerns “because the regime and the YPG could join forces against Turkey.”

This remark alone highlights Ankara’s difficult situation, since Russia is actively trying to encourage an agreement between the regime and the YPG in northern Syria and has also made clear that it is not averse to some rights being granted to the Syrian Kurds.

The bottom line appears to be that the lack of a policy on the Syrian Kurds is emerging as one of Ankara’s main stumbling blocks in Syria. Ankara says the YPG does not represent the Kurds and it has no quarrel with the Kurds.

It has, however, not reached out in any tangible way to the Syrian Kurds, which suggests one of two possibilities: one, that its “Kurdish phobia” extends to all Syrian Kurds, and two, that there are no “Turkey-friendly Kurds” left to reach out to in Syria because the majority of Kurds are pro-YPG at this stage.