Northern Syria heats up as next likely US-Turkey flashpoint

Despite speculation that Turkey and the United States might repair their tense relations now that one key issue is settled, an Erdogan adviser called Turkey's shelling east of the Euphrates River “a friendly message to the US.” 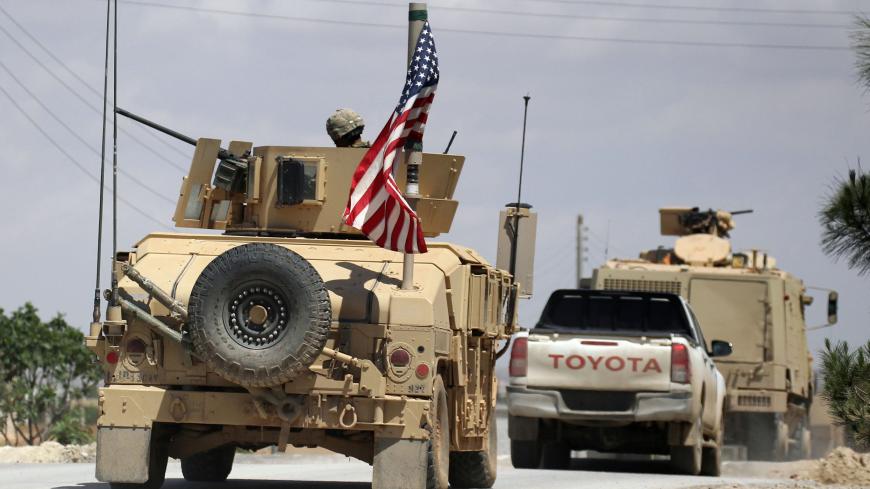 The US flag flutters on a military vehicle in the Manbij countryside, Syria, May 12, 2018. - REUTERS/Aboud Hamam

Now that the tension surrounding US pastor Andrew Brunson has blown over, there is speculation that Turkey and the United States will move to improve their troubled ties. For example, cooperation between Ankara and Washington over the murder of Saudi journalist Jamal Khashoggi brought US Secretary of State Mike Pompeo and CIA Director Gina Haspel rushing to Ankara. Still, differences remain over multiple unresolved issues.

Northern Syria, where the United States has allied itself with the Democratic Union Party (PYD) and its military wing, the People's Protection Units (YPG) — two groups that Turkey says are terrorist organizations linked to the outlawed Kurdistan Workers Party (PKK) — may be the site of the next flashpoint.

The United States sees the PKK as a terrorist organization, too, but has refused to use this designation for the PYD and YPG, supporting them instead in their fight against the Islamic State and other radical Islamic groups in Syria.

Disregarding US objections, Turkey launched its Operation Olive Branch in January to capture the YPG-held Syrian city of Afrin near the Turkish border.

A major concern is that if Ankara carries out its threat and enters into an all-out war with the YPG in northern Syria, it could also lead to a confrontation between the Turkish army and US forces deployed in the region.

The territory in question represents nearly 30% of Syria and stretches from the city of Manbij, just west of the Euphrates River, to the Iraqi border east of the river. It also shares a 600-kilometer (373-mile) border with Turkey in the north.

Ankara is determined to ensure that an autonomous Kurdish entity similar to Kurdish Northern Iraq does not emerge in the region, but the odds are against the effort.

US Secretary of State Mike Pompeo made it clear recently that the United States does not intend to drop the YPG and PYD as its partners in Syria, despite what Ankara wants.

“We’ve worked closely with the Syrian Kurds now for my entire time in service in this administration. They have been great partners. We are now driving to make sure that they have a seat at the table,” Pompeo said during an Oct. 10 event organized by the Jewish Institute for National Security of America.

Ankara and Washington concluded a “road map” in June to defuse the increasingly dangerous situation developing between the two countries over the YPG presence in Manbij, where the United States has forces deployed.

According to the agreement, YPG fighters were to leave Manbij within 90 days, after which Turkish and US forces would to conduct joint patrols in the city. Those patrols never materialized, and Ankara says the YPG remains in Manbij.

Erdogan has also made it clear publicly that after Manbij is cleared of the YPG, Turkey’s next target will be YPG positions east of the Euphrates.

Pompeo’s remarks prompted Russia to accuse Washington of using the Kurds to create a predominantly Kurdish region within Syria and destroying the unity of the country.

Russian Foreign Minister Sergey Lavrov told the French media recently that Washington is “illegally trying to create a quasi-state in eastern Syria by using the Syrian Democratic Forces,” which was established by the United States and has the YPG as its main component, although it also includes Arab, Assyrian, Christian and even Turkmen fighters.

Russia has also refused to outlaw the PYD and the YPG. Its main concern in northern and eastern Syria remains Washington’s long-term plans for the region that are predicated on its alliance with the Kurds.

Otherwise, Moscow has no problem with the Kurds' presence in the region. Like Washington, it also wants the Kurds to have a say in any Syrian settlement, and has been trying to get the PYD to negotiate a political deal with the Syrian regime.

Ankara welcomed Lavrov’s remarks despite Turkey’s differences with Russia over the nature of the rights to be given to the Kurds under a new Syrian constitution. Analysts believe Lavrov’s remarks also encouraged Erdogan into ratcheting up his rhetoric against Washington over the YPG issue.

Meanwhile, the Turkish shelling of YPG positions east of the Euphrates on Oct. 29, although limited in scope, illustrated the volatility of the situation as Erdogan continues to issue his angry warnings.

The shelling was “a friendly message to the US,” according to Erdogan’s adviser Ilnur Cevik. “Turkey gave these messages in Afrin too and went on to do what it had to. Now eyes are on Manbij and east of the Euphrates,” Cevik wrote in a commentary for the news portal Yeni Birlik.

During an address to provincial leaders from his Justice and Development Party on Oct. 26 — two days before the YPG was shelled — Erdogan accused the United States of using the Manbij road map to waste Turkey’s time and issued a “final warning” to Washington. “We are resolved to turn our attention to the east of the Euphrates, from where Turkey is being threatened, rather than seeing our time wasted in Manbij,” he said.

“It defies logic that a country like Turkey should be sacrificed for a bloody group whose past is dark and whose members are suspect,” Erdogan added, referring to US support for the YPG. “These remarks of ours should be taken as our final warning,” he cautioned.

The shelling of YPG positions also came a day after the quadrilateral summit on Syria in Istanbul, hosted by Erdogan and attended by Russian President Vladimir Putin, German Chancellor Angela Merkel and French President Emmanuel Macron.

Erdogan used the occasion to once again underline Ankara’s determination to rid northern Syria of the YPG.

A Western diplomat told Al-Monitor on condition of anonymity that Erdogan can’t afford a military confrontation with the United States despite his dire warnings regarding northern Syria. “He is only rattling his saber,” the diplomat said.

Retired Brig. Gen. Naim Baburoglu argued that Turkey has two choices in northern Syria. The first, which he does not consider to be likely, is to cooperate with the United States to eliminate the YPG threat. “The second is for the Turkish Armed Forces, together with its allies in the Free Syrian Army, to conduct an operation east of the Euphrates.” Baburoglu wrote in an article for the news portal Gercek Gundem.

“Turkey may be left with no choice but to launch this operation despite the United States,” he maintained.

Few believe that Turkey and the United States can restore their “strategic partnership” under such conditions. It will be success enough if they can contain potential new crises while important issues between them remain unresolved.