Olive Branch wins Erdogan friends at home, but risks standoff with US

Despite the success of Ankara's Syrian military operation in closing Turkish ranks around him, President Recep Tayyip Erdogan has raised the possibility of a military confrontation between Turkey and the United States. 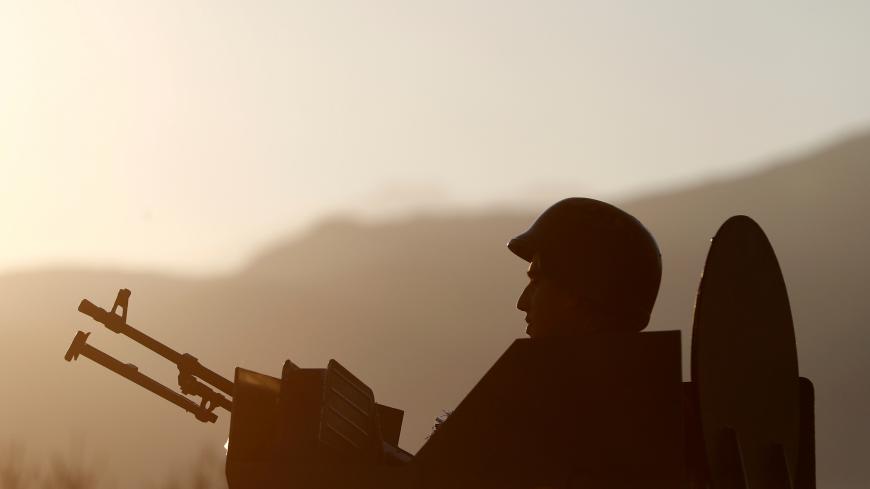 A Turkish soldier is seen in an armored personnel carrier at a checkpoint near the Turkish-Syrian border in Kilis province, Turkey, Jan. 29, 2018. - REUTERS/Murad Sezer

Turkish President Recep Tayyip Erdogan has achieved one of his main goals by ordering the Olive Branch operation against the People’s Protection Units (YPG) in Afrin. He has won the support of most if not all Turks, who tend to close their ranks at such times.

Journalist Fehmi Koru, who was once close to Erdogan, recalled in a recent article how left-leaning Prime Minister Bulent Ecevit had called snap elections after ordering the military to go to Cyprus in 1974, and won in a landslide. Koru also recalled, however, that Winston Churchill had lost the first elections after World War II despite his role in defeating Hitler’s Germany.

Whatever Erdogan’s calculations, things may not go as smoothly as he expects in Syria, especially now that he has raised the possibility of a military confrontation between Turkey and the United States.

American support for the YPG and its parent organization, the Democratic Union Party (PYD), which Ankara says are terrorist organizations linked to the outlawed Kurdistan Workers Party (PKK), continues to fuel tensions between Ankara and Washington.

In the meantime, Erdogan has raised the stakes even higher. He is saying now that Turkey will clear not just Afrin, but also the city of Manbij, just west of the Euphrates River, and all the land held by the YPG along Turkey’s long border with Syria to the east of the Euphrates.

This territory is greater than a number of some Arab countries put together and is currently in YPG hands with US ground and air support. The possibility, therefore, of a military standoff between Turkey and the United States is not something that either side can afford to brush aside.

“Our battles will continue until no terrorist is left, right up to our border with Iraq,” Erdogan told members of his party in Ankara on Jan. 26.

Washington, however, says that it has no intention of pulling out of Manbij the way Moscow did in Afrin, to facilitate Turkey’s onslaught. Gen. Joseph Votel, the commander of the US Central Command, told CNN that moving US forces from Manbij “is not something we are looking into."

Secretary of State Rex Tillerson also pointed out at Stanford University last week that the United States would remain in Syria and work with its local allies to fight the Islamic State and contain Iranian influence in Syria.

Erdogan is not likely to backpedal, though, because of the risk of losing political credibility at home. His job in Syria will not be easy, however. Retired Brig. Gen. Naim Baburoglu believes that even if Washington allowed Turkey to move into Manbij as part of some diplomatic arrangement, it is still unlikely to give the green light for Turkish forces to move further east.

Baburoglu told Hurriyet in an extensive interview that Ankara has no choice but to face the risks and move east of the Euphrates to prevent what he said was “an existential threat” to Turkey.

“As long as the United States remains in Syria, the threat to Turkey from the PKK-PYD, which will set root there, will increase,” Baburoglu said, echoing what many Turkish officials believe. His caveat, though, was that Turkey would have to establish peace with Damascus and work more closely with Russia and Iran if it wanted to succeed.

With such talk in the air, the unthinkable has become thinkable. The loss of a single Turkish soldier or a US Marine in a standoff could ignite an unprecedented crisis between the two countries and might sound the death knell for the longstanding strategic relationship between Ankara and Washington, something that Moscow and the PYD would be happy to see.

But Erdogan may still be jumping the gun. The Turkish army and its Free Syrian Army allies are still far from completing the task in Afrin, though the Turkish army is likely to prevail in the end. The time factor remains crucial since an operation that lasts for months on end will have unexpected risks.

Meanwhile, rising Turkish military casualties, increasing numbers of civilians killed in Turkey by YPG shelling and an increase in collateral damage among civilians in Afrin could all turn the tide and create negative domestic and international fallout. Juggling all of this remains a tall order for Erdogan.

At the same time, tensions between Ankara and Washington appear set to continue. The crisis over the statements issued by the two sides following Erdogan’s phone conversation with President Donald Trump last week reflected the less than friendly tone in current ties. Regardless of what was actually discussed between Erdogan and Trump, Washington is standing behind the White House’s readout of the conversation, even if Ankara says it doesn’t reflect the truth.

The readout calls on Turkey not only to “de-escalate” and “limit its military actions,” but also “to avoid any actions that might risk conflict between Turkish and American forces,” suggesting that Washington has started to factor in the possibility of such a confrontation.

In the meantime, talks are continuing between Ankara and Washington in an effort to reduce the strain. Erdogan’s close adviser and spokesman Ibrahim Kalin wrote in a statement Jan. 29 after a phone conversation with US national security adviser H.R. McMaster that Washington had given assurances that “no further weapons will be given to the PYD/YPG.”

There was, however, no statement from Washington regarding this conversation, and given the differing accounts of the Erdogan-Trump conversation, many in Turkey took Kalin’s statement with a grain of salt.

Hurriyet's Hande Firat, who is known to have good sources within the presidency and the government, said in her analysis of the Kalin-McMaster conversation that Turkey had spelled out its demands of the United States. She listed them as ending all arms supplies to the YPG, taking back the weapons given to date, ending training for the YPG, terminating all logistic support for the group and severing all ties with it. Few expect Ankara’s demands to be met.

Retired Adm. James Stavridis, NATO’s former supreme commander in Europe, is one of the few voices on the American side exhorting Washington not to prefer the Kurds over Turkey.

“The overall US strategic interest lies in keeping Turkey aligned with NATO and the trans-Atlantic community. It would be a geopolitical mistake of near epic proportions to see Turkey drift out of that orbit and end up aligned with Russia and Iran in the Levant,” Stavridis wrote in an article for Bloomberg. In the meantime, the relatively low-key response from Turkey’s NATO allies in Europe to Operation Olive Branch may also change in the coming days and weeks, especially if there is an increase in civilian casualties.

Mounting pressure on liberal Turks and Kurdish political activists opposed to Ankara’s operation who are already facing an angry backlash from Erdogan and his supporters in the media could also push Europe into taking a stronger line against Turkey. A debate is already raging in Germany as to whether an arms embargo should be placed on Turkey for using German-supplied Leopard tanks in its operation in Syria.

It seems there are still many hills if not mountains to cross before Erdogan can achieve his objectives in ordering the Turkish military into Syria. On the other hand, if Washington were to meet a significant portion of Ankara’s demands, it would be a major victory for Erdogan and make him politically unstoppable. That, however, remains a very big if.