Turkey says US account of Trump-Erdogan call not 'accurate'

A telephone conversation between the Turkish and US leaders has turned into a "he said-he said" affair as the gulf widens between the NATO allies over Syria. 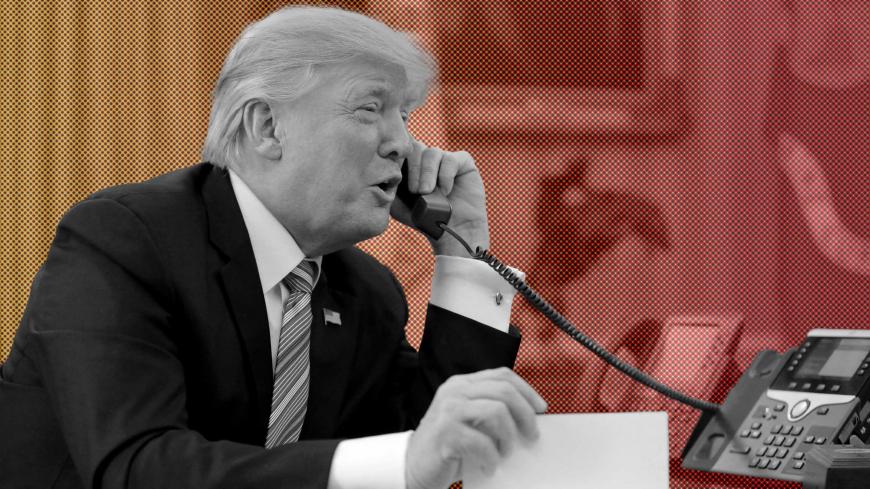 US President Donald Trump speaks on the phone to Irish Prime Minister Leo Varadkar in the Oval Office of the White House, Washington, June 27, 2017. - REUTERS/Carlos Barria

A telephone call between the presidents of the United States and Turkey produced conflicting accounts of the conversation about Turkey’s military foray into Syria in pursuit of Kurdish rebels, underscoring the deep fissures dividing the NATO partners.

Now, Turkish President Recep Tayyip Erdogan says his armed forces will push to the strategic town of Manbij, which is controlled by the Kurds and where some of the estimated 2,000 US special forces in Syria are deployed as part of the US-led coalition fighting the Islamic State (IS). Unconfirmed reports emerged on Thursday that Turkish warplanes hit Kurdish weapons stores in Manbij.

In a phone call late Wednesday, US President Donald Trump warned Erdogan “to avoid any actions that might risk conflict between Turkish and American forces” and that “escalating violence in Afrin, Syria, risks undercutting our shared goals in Syria,” according to the strongly worded statement from the White House.

But Turkish officials disputed that description of the discussion, saying it was inaccurate.

“President Trump did not share any ‘concerns about escalating violence’ with regard to the ongoing military operation in Afrin,” the officials told reporters, but added that Trump did say the operation in Afrin should be limited in duration because of the presence of American soldiers in Manbij “to prevent a hot conflict in the area.”

An outright confrontation between the United States and Turkey, once the most stalwart of allies, remains an almost unthinkable outcome. Yet the latest discourse exposes how far their strategic priorities have diverged.

Operation Olive Branch has broad support among Turks to thwart the YPG’s consolidation of territory along the Turkish border that Ankara says threatens its national security.

The YPG has been the most effective US partner on the ground in the fight against IS. To Turkey’s ire, the Pentagon has armed and trained the rebels, despite their close ties to the Kurdistan Workers Party (PKK), which Washington labels a terrorist organization for its three-decade insurgency in Turkey, home to the world’s largest population of ethnic Kurds.

US assistance to the YPG and its political wing, the Democratic Union Party (PYD), “is the most important wedge in the alliance. Turkish officials, bureaucrats, ideologues have all had the nightmare for decades that a foreign power would support the PKK and threaten Turkey’s territorial integrity. US support for the PYD plays squarely into that existential fear,” Selim Koru, an analyst at Ankara’s Economic Policy Research Foundation of Turkey, told Al-Monitor.

Erdogan has repeatedly intimated that Washington had a hand in a 2016 bungled military coup to topple him. Emergency rule imposed after the coup attempt has allowed him to jail tens of thousands of opponents, including a handful of American citizens. Deteriorating relations hit a nadir late last year, when both sides halted visas after Turkey arrested local staff members working at US missions on terrorism-related charges. Visa processing was fully restored this month.

“President Trump also expressed concern about destructive and false rhetoric coming from Turkey and about United States citizens and local employees detained under the prolonged state of emergency in Turkey,” his office said in its readout of the call. The Turkish officials flatly denied that Trump brought up emergency rule and that he only said criticism of the United States was concerning. Trump did request the release of the detainees, the Turkish side confirmed, but Erdogan told him it was a matter for Turkish courts to decide.

Erdogan has drawn Turkey closer to Russia and Iran amid the sparring with the United States, and sending soldiers to Syria gives him renewed clout in efforts to forge a resolution of the Syrian conflict with Tehran and Moscow at a time when the Trump administration appears to lack a clear strategy.

“Turkey is becoming more important on the ground through the military operation and has more say at the table,” said Koru. “From Ankara, it does feel very much like the United States no longer has a vision for what it wants for this region. That makes it very difficult for it to engage allies.”

In a tweet, Richard Haass of the New York-based Council on Foreign Relations pointed to a lack of coordination within the US government. “What is going on with Turkey and Kurds in northern Syria suggests a national security process in disarray.” But Haass also said that a rupture between Turkey and the United States was unavoidable. “The US should be working with Kurds in Syria for moral and strategic reasons alike. A break with Erdogan’s Turkey is inevitable, if not over this than over other differences,” he tweeted.

In the end, the United States may lose the hearts of both Turks and Kurds. Washington stood by while Erdogan warned for months his army would enter Afrin, and Defense Secretary James Mattis acknowledged Turkey’s “legitimate security concerns” once it did.

“Russia, Iran, Turkey are divvying up [Syria] and sacrificing Afrin. Now America has abandoned Afrin too,” said Sidki Zilan, a Kurdish lawyer and activist in Diyarbakir, a predominantly Kurdish city in Turkey. “The system is always on the side of the powerful. The Kurds have been forsaken again.”