Turkish officials say the US president promised Turkey’s leader that arms shipments to Kurds fighting the Islamic State would stop, but observers worry such a move will cost Washington a key partner and undermine stabilization efforts in Syria. 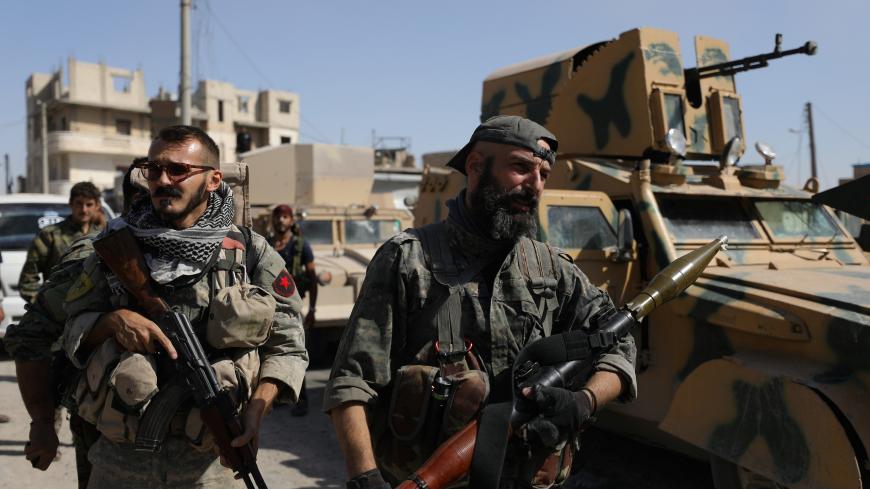 A fighter of the Syrian Democratic Forces carries a weapon as he stands near a military vehicle in Raqqa, Syria, Oct. 16, 2017. - REUTERS/Rodi Said

US President Donald Trump appeared to bow to Turkish demands when he reportedly told his counterpart Recep Tayyip Erdogan that the Pentagon would stop arming Syrian Kurds, Washington’s closest ally in the fight against the Islamic State, but observers said the move could undermine efforts to stabilize the war-torn country.

The United States’ cooperation with the People’s Protection Units (YPG) since at least 2014 has roiled ties with NATO partner Turkey, which says the militant group is controlled by the Kurdistan Workers Party (PKK), listed as a terrorist organization for its three-decade armed campaign against the Turkish state.

Trump’s surprise pledge came as the US-led coalition continues to battle IS in pockets of Syria and raised concerns about the post-conflict period, when the Kurds are expected to play a central role in rebuilding shattered cities, promoting civilian governance and preventing Syrian President Bashar al-Assad from retaking control of areas they now run. It will also further erode Washington’s clout in a region it appears to be ceding to rivals Iran and Russia, analysts said.

Trump tweeted Nov. 24 that he would speak with Erdogan “about bringing peace to the mess that I inherited in the Middle East.” After the men spoke, Foreign Minister Mevlut Cavusoglu, who was present for the call, told reporters Trump said the United States would no longer supply arms to the YPG-led Syrian Democratic Forces, six months after it announced it was sending them heavy weapons. “He clearly said that this nonsense should have been ended sooner,” Cavusoglu stated.

The White House’s readout of the call was more ambiguous. Trump informed Erdogan of “pending adjustments to military support” consistent with US policy after IS was driven from Raqqa last month, it said.

Arming the Kurds has been a major source of friction in US-Turkish relations, but the two sides are at odds over a host of issues. The United States has refused to turn over a Muslim preacher living in Pennsylvania that Erdogan blames for a bungled military coup last year. Turkey has detained local staff working at US missions in the coup investigation, as well as American citizens.

The trial of a Turkish businessman and a state bank manager on charges they helped Iran circumvent sanctions begins this week in New York in what Erdogan has called a politically motivated case.

Amid the diplomatic sparring, Turkey has gone so far as to say it could review its membership in NATO and has aligned more closely with Iran and Russia to hammer out a resolution for the Syria crisis.

After meeting Russian President Vladimir Putin and Iran’s Hassan Rouhani last week, Erdogan signaled he might even be willing to negotiate with their ally Assad, reversing years of hostility toward the Syrian leader that has included support for groups trying to overthrow him.

For its part, the United States has already largely marginalized itself in Syria, but Trump’s unilateral announcement will unnerve its last partner in the country. Syrian Kurds are already wary about the US commitment to Kurds elsewhere in the region, said David Phillips, the director of the Program on Peace-Building and Rights at Columbia University’s Institute for the Study of Human Rights.

“Syria is far from resolved. You need a political solution and a constitutional arrangement, and while that is being negotiated, the local actors have to take responsibility for local security, humanitarian assistance and reconstruction. Without the Kurds, who is going to do that?” Phillips said in an interview with Al-Monitor. “Why would they do anything after Trump has withdrawn security assistance?”

This danger seems especially real after the United States joined Iran, Turkey and the Iraqi central government to oppose an independence referendum in September by Iraq’s Kurds, longtime US allies. In the wake of the plebiscite, Iranian-backed Iraqi forces seized tracts of territory from the Kurdistan Regional Government.

“The Iraqi Kurds sacrificed thousands of fighters at our behest, and when it was crunch time, we just walked away,” said Phillips, adding that Iraqi Kurdish officials have described to him a sense of betrayal. “Who is going to fight and die for us in the future?”

Washington has already “turned a blind eye on the Kurds of Iraq and Turkey’s Kurds,” said Garo Paylan, a member of the Turkish parliament from the opposition Peoples’ Democratic Party, referring to US silence when a peace process between Ankara and the PKK collapsed in 2015, sparking bloody clashes that killed more than 400 civilians and destroyed swaths of cities across Turkey’s predominantly Kurdish southeast.

“Now it’s the Syrian Kurds’ turn … as Turkey prepares for an operation against Afrin,” Paylan told Al-Monitor. Erdogan has repeatedly threatened to enter the Syrian province of Afrin to thwart the Kurdish political party tied to the YPG. “The status quo is powerful and [Western] powers have no vision for the Muslim world by supporting democracy.”

However, some argue that the United States will not be so quick to abandon Syria’s Kurds, who continue to lead the charge to recapture IS' last strongholds in Deir ez-Zor near the Iraqi border. Mutlu Civiroglu, a Kurdish affairs analyst based in Washington who is in regular contact with Syrian Kurdish officials, said activists reported a new convoy of military aid reached Kurdish-controlled territory as recently as Nov. 26.

Civiroglu told Al-Monitor, "[US Defense Secretary James] Mattis recently emphasized the importance of preventing areas freed from the Islamic State from returning to the militants' control. This statement signals that the United States will not exit areas controlled by the SDF anytime soon, and Kurdish authorities have the same view.”