Confrontation with the United States and the West is a necessary ingredient in Erdogan’s quest to consolidate his nationalist base, making it more likely that Turkey and the United States will collide over Manbij. 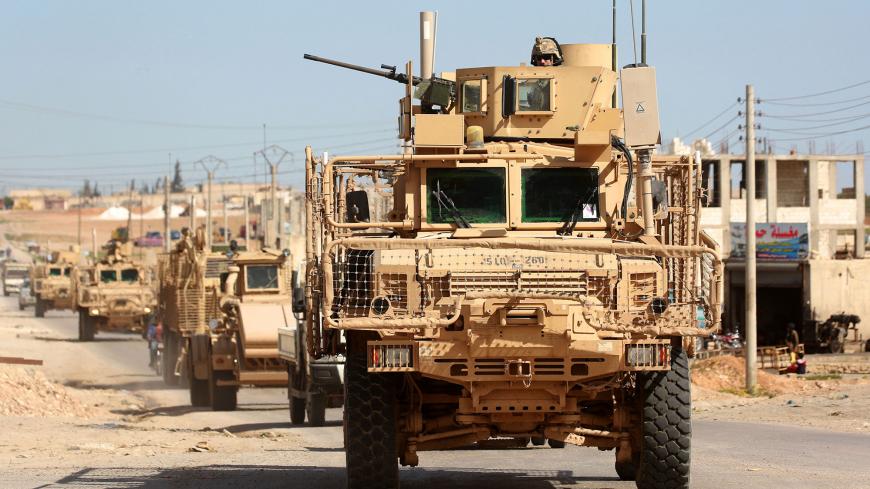 The town of Manbij in northern Syria has been gradually becoming a dangerous fault line between Turkey and the West, as Turkish strongman President Recep Tayyip Erdogan and his loyalists continue lambasting Western capitals — particularly Washington and Paris — one after the other for their lack of support for Turkey’s offensive against Syrian Kurdish groups.

One of the most recent and striking examples of this enmity came April 1, when Turkey’s low-profile deputy prime minister accused Western governments of supporting terrorist groups to “avenge the defeat of their grandfathers.”

"We drove their grandfathers into the sea," he said. "That is why they are waging a relentless struggle against us,” Hakan Cavusoglu said, referring to the Greco-Turkish war in 1897. “However, because they do not dare to confront us openly, they franchise the terrorist organizations."

He said, “Look at France, Germany, Italy and Spain, they are ruled by technocrats. No real leaders. In the whole world, Recep Tayyip Erdogan occupies the top seat as a leader. You may perhaps add [Russian President Vladimir] Putin next to him.”

Cavusoglu’s remarks are a good example of the anti-Western theme prevalent among the rulers of Turkey who see Syrian Kurdish groups, including the Democratic Union Party (PYD) and People’s Protection Units (YPG), as synonymous with terror. According to the Turkish establishment, those who support and fund these groups include the United States, France and the Gulf states.

Erdogan, whose daily public speeches have added up to some 1,300 minutes in the past month, has not hesitated to castigate Western leaders in humiliating terms. Emmanuel Macron, the president of France, became the latest target after he received a Kurdish delegation of PYD and YPG figures at the Elysee Palace on March 29. After the Associated Press reported that the French leader promised to send French forces to Manbij should Turkey proceed to realize its threats against the Syrian Kurdish groups there, Macron quickly became a hated figure in the eyes of the Turkish establishment.

Manbij is a very sensitive issue for Turkish ears and any commitment to the PYD or YPG are unacceptable for Turkey, said Olivier Piot, a French expert on the Kurdish issue.

“Emmanuel Macron is crossing a line in his relationship with Turkey. Until now, he expressed concern and warned President Recep Tayyip Erdogan that he had to pay attention to the stability of the region. But it’s become clear that Ankara’s goal is to capture the 900-kilometer [560-mile] frontier in northern Syria,” Piot said in an interview with France24. “The French president is beginning to draw a red line for the Turks, warning them against entering the town of Manbij. We're in a situation in which diplomatic posturing won’t be enough. Soon we are going to find ourselves facing military engagement. If France wants to continue to play a role in the region, it will have to make a choice.”

In the meantime, it is the United States, not France, that will test the future of Turkey’s relations with the West.

“The United States and Turkey are on a collision course in northern Syria, threatening to ignite a dangerous new phase in the Syrian civil war, undermine the fight against IS and redraw the map of the Middle East. The epicenter of this brewing conflict is Manbij, where the US-backed Syrian Democratic Forces (SDF) and Turkish-backed rebels face off across a combustible front line,” Deutsche Welle reported.

“On March 28, the Turkish National Security Council issued a statement saying, ‘Terrorists in Manbij need to leave the region immediately; otherwise Turkey will not hesitate to take its own initiative as it did in other regions. Turkey will maintain the same steadfastness against terrorist groups east of the Euphrates,’" the report read. Manbij is just west of the Euphrates.

For the Kurds, Turkey’s occupation of mainly Kurdish Afrin has been achieved thanks to “Russian betrayal” and now in Manbij they suspect a possible American one, too. Some segments of American policy-making are careful to keep Turkey on board as an important NATO ally and not to lose Ankara to Putin.

The indecisiveness in Washington on Manbij, President Donald Trump’s recent statement that he wants the United States to “leave Syria soon” and his decision to freeze American assistance to the SDF embolden the Turkish leadership's determination to move into the contested city in northern Syria. Following the departure of Rex Tillerson, who is to be replaced by Mike Pompeo as secretary of state, Manbij's fate is uncertain. Neither Pompeo nor Trump’s incoming national security adviser, John Bolton, are particularly known as Erdogan fans.

If American policymakers get over their indecisiveness on Manbij, they have to either take a Turkey-appeasing stand that would be termed another American betrayal by the Kurds or stand by the US partnership with the SDF, putting Turkey-US relations on a collision course. Can Turkey dare to set such a course?

The Western world is still in disbelief, unable to see that a confrontational relationship with the United States and the West is a necessary ingredient in Erdogan’s quest to consolidate his nationalist base. Thus, it is highly plausible that Turkey and the United States will collide over Manbij.

Erdogan’s recent bashing of Israeli Prime Minister Benjamin Netanyahu as a “terrorist” is a harbinger of what Washington can expect if it persists on its partnership with the SDF in Manbij.

Turkey’s ever-increasing reliance on Russia also expands its room to maneuver against the United States and West, as one of Erdogan’s aides bluntly put it. “Without Russian support, we cannot even fly drones over Afrin,” CNN-Turk quoted him as saying. That is exactly the reason Putin is investing in Erdogan. The cracks between the NATO allies are deepening, and Manbij is the most vulnerable fault line.