The US president's choice for his new secretary of state comes at an inconvenient time for Erdogan’s plans to capitalize on Turkey’s victory over the US-allied Syrian Kurdish militia in Afrin. 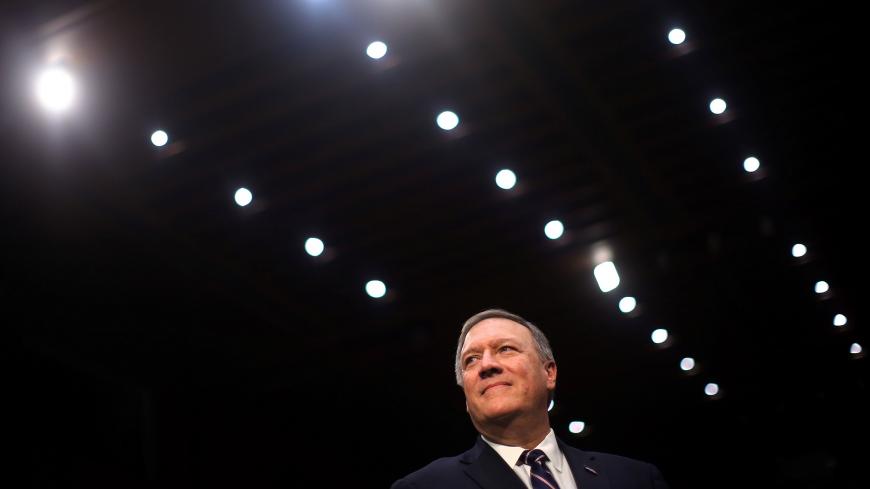 Mike Pompeo, then a congressional representative for Kansas, arrives to testify before a Senate Intelligence Committee hearing on his nomination to be become director of the CIA at Capitol Hill in Washington, DC, Jan. 12, 2017. - REUTERS/Carlos Barria

It is not clear at this stage what effect President Donald Trump’s nomination of Mike Pompeo as secretary of state will have on Turkish-American ties, already strained over a number of seemingly intractable issues.

What is clear, though, is that Ankara is rattled with Trump’s choice. The reason is a tweet by Pompeo during the coup attempt in July 2016 in which he likened Turkey, alongside Iran, to a “totalitarian Islamic dictatorship.”

The implication of the tweet, which Pompeo later deleted, appeared to be that the attempted coup — which had still not failed at the time of the message — may have been an auspicious event. It only served to reinforce the belief in Ankara that Washington was somehow behind the attempt to get rid of Erdogan and his Islamist Justice and Development Party (AKP).

The subsequent failure by the United States to extradite Fethullah Gulen, the Islamic preacher residing in Pennsylvania who Ankara accuses of masterminding the failed coup, and members of his retinue still fuels this belief.

Meanwhile, Pompeo’s tweet was etched in Turkish minds and continues to rankle in Ankara. After Pompeo’s nomination was announced, Foreign Minister Mevlut Cavusoglu did not refer to him by name, but made his condition for working productively with the next secretary of state clear: “This is the choice of the United States. We do not want to comment on it, but whoever it will be, they need to first learn how to behave, approach and respect us,” Cavusoglu told reporters in Moscow, where he was on an official visit.

Pompeo's nomination could not have come at a more inconvenient time for Erdogan, who is determined to forge ahead with his agenda in Syria after wresting control of the northern city of Afrin from the People's Protection Units (YPG), the US-backed Kurdish group Ankara says is a terrorist organization.

Emboldened by his relatively easy victory in Afrin, Erdogan is now repeating his promise to chase the YPG from the city of Manbij, just west of the Euphrates River, and from lands it holds east of the Euphrates.

The problem he faces is that the YPG has settled into these regions with backing from the US military. Turkey and the United States agreed on a mechanism to negotiate this issue during outgoing Secretary of State Rex Tillerson’s visit to Ankara in February, to avoid a potential military standoff. The future of these talks hang in the balance now that Pompeo, who Ankara considers a hawk, will be taking over from the much more deferential and diplomatic Tillerson.

Reflecting the uncertainty in this regard, Erdogan told a regional congress of the AKP in the eastern city of Erzurum on March 16 that it was not clear how “the new team” in Washington would proceed. He underlined, however, that Turkey remains resolved in its determination to move on to Manbij next, regardless of what the US position might be. “If America evacuates Manbij completely then this business will be achieved faster and more easily,” Erdogan said.

Given Washington’s determination to remain in Syria to keep a watchful eye on Iran, it is not clear how Pompeo will react to such pressure from Ankara. Most Turkey analysts expect that with his military background and connections to the right-wing Tea Party, Pompeo’s position is more likely to be in line with that of the Pentagon than with the more cautious line the State Department followed under Tillerson.

Serdar Turgut, the Washington correspondent for the liberal Turkish daily Haberturk, pointed out that Pompeo had already spoken out against Erdogan when he was in the US Congress and served on the House Permanent Select Committee on Intelligence.

“There is no indication that he will change his attitude unless he gets an order from Trump,” Turgut reported from Washington last week. He added that there was also no indication that Trump will issue such an order. “It is also said in Washington that Pompeo was the person influencing Trump’s decision not to give up on the YPG the most,” Turgut said.

Diplomatic sources in Ankara talking to Al-Monitor on condition of anonymity, however, recall that Pompeo’s first visit abroad after being appointed CIA director in November 2016 was to Turkey. They argue that whatever his personal views may be, Pompeo knows the importance of Turkey for the United States given its strategic place on the map.

Mahmut Ovur, a columnist for the pro-government Turkish daily Sabah, acknowledges that Pompeo is aware of Turkey’s strength in the region and also understands Ankara's sensitivities after his visit to Ankara, where he held talks with Erdogan and his Turkish counterpart Hakan Fidan.

Nevertheless, Ovur indicates that it is not clear if Pompeo will be able overcome his negative views regarding Turkey. “Hawkish Americans like Pompeo do not look with favor on Iran, the Muslim Brotherhood and Hamas, and because of this it is very clear that they do not trust Turkey,” Ovur wrote in his column. Ankara and Tehran continue to cooperate in Syria despite their differences. Turkey also continues to support Hamas and the Muslim Brotherhood.

Cavusoglu believes that the discussions with Washington regarding Manbij that were started under Tillerson will continue during Pompeo’s tenure at the State Department. Trying to strike a more optimistic note, he told Sabah in an interview, “This process started with an order from Trump, who asked ‘Why is our relationship with Turkey not good?’ and gave instructions that promises made [to Turkey] be kept.” He added, “[Trump] has an interest in and a liking for Turkey, and respect for our president.”

Nevertheless, Pompeo’s nomination has already clouded discussions in Washington. Cavusoglu was due to travel there on March 19 but canceled his visit after it was announced that Pompeo would be replacing Tillerson.

Meanwhile, recent statements by Cavusoglu indicating that Turkey and the United States had agreed at these talks that the YPG should leave Manbij are not being corroborated by Washington.

Asked about Cavusoglu’s remarks, State Department spokeswoman Heather Nauert told reporters at a March 15 press briefing that this was not the United States' understanding of the matter. “We’re still working to reach an agreement with Turkey at this point and we’re not done talking with them,” she said.

Nauert also annoyed Ankara with her written statement after Turkish forces and their Syrian allies gained control of Afrin. Expressing “deep concern” over reports from the city, the statement read, “It appears the majority of the population of the city, which is predominantly Kurdish, evacuated under threat of attack from Turkish military forces and Turkish-backed opposition forces.” The statement also expressed concern over reports of looting by Syrian opposition fighters under Turkish command.

Ankara says that the Turkish forces are being welcomed by the local Afrin population. Nauert’s statement shows that more tension between Turkey and the United States over Syria may be around the corner.

Erdogan, though, is not ready to rein in his hard talk over Manbij now that he has his victory in Afrin. He needs to show determination to bolster his position at home in the lead-up to the presidential election planned for 2019.

The YPG is not the only issue clouding Turkish-US ties presently. Other unresolved issues include Gulen and his supporters in the United States, as well as the incarceration in Turkey of the American pastor Andrew Brunson, who faces a life sentence after having been accused of being a member of Gulen’s outfit.

The bottom line is that with Erdogan’s hard-line approach and Pompeo’s reportedly hawkish bent, the two supposed “strategic partners” may be on a collision course.