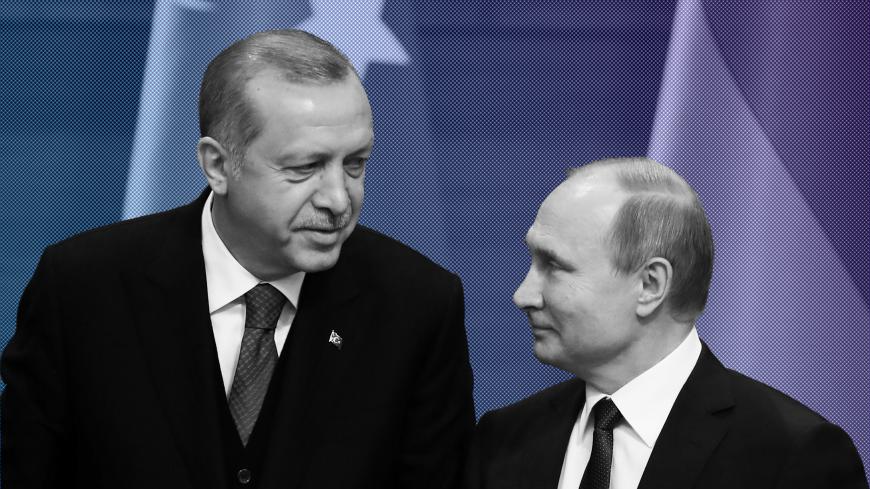 Turkey’s open defiance of Russia — by enthusiastically supporting the airstrikes by the United States, France and Britain against Syrian regime targets — has raised new questions about the consistency of Ankara’s Syrian policies and the manner in which it conducts its foreign policy in general.

It is not clear, for example, what effect Turkey’s position will have on its burgeoning ties with Russia, which Ankara has been keen to develop as a counterbalance to its deteriorating ties with the West.

It is also unclear if Turkey is now leaning toward the West, with which it has extremely tense relations over a host of issues — including differences over Syria.

Continuing to cooperate with Russia remains vital for Ankara if it is to achieve some of its principal aims in Syria, especially with regard to preventing an autonomous and predominantly Kurdish entity from emerging along its borders.

Russia gave the green light to Turkey to launch its Operation Euphrates Shield in Syria in August 2016 and its Operation Olive Branch in January of this year.

While also targeting the Islamic State, Turkey’s main objective in both operations was to prevent Kurdish fighters of the People's Protection Units (YPG) from gaining a large swath of territory along the Turkish border.

Some are asking now if Ankara’s support for the strikes against regime targets in Syria signals a return to the Western fold. US and European support for the YPG in Syria, however, remains a source of high tension between Ankara and the West. Turkey says the YPG is a Kurdish terrorist organization.

Turkey’s ties with the United States and Europe are also beset by other political and legal issues that are not expected to be overcome anytime soon.

Questions are also being raised now about the future of the Astana process, co-sponsored by Moscow, Ankara and Tehran, which is also seeking a solution to the Syrian crisis alongside UN efforts.

It remains to be seen if this process can continue fruitfully after Ankara’s unequivocal support for the US-led strikes against the Assad regime, which Moscow and Tehran are likely to back with added determination now.

Retired Turkish Ambassador Suha Umar, who has served with NATO and the Middle East, believes Ankara misread the motives behind the operation mounted by the United States, France and Britain. He said Ankara’s satisfaction after the operation was misplaced.

Umar pointed to the statement by British Prime Minister Theresa May to parliament in which she clearly indicated that their aim was not regime change in Syria. “These strikes will not result in what our government wants to see. Ankara’s expectations regarding Assad will remain unsatisfied,” Umar told Al-Monitor.

Umar said Turkey’s cooperation with Russia could be a victim of Ankara’s erratic approach to events in Syria. “We entered Syria militarily after Russia allowed us to use Syrian airspace," he said. "It is vital for Turkey to continue getting this support. That, however, may now have been endangered.”

The disagreement over Assad, however, remains the elephant in the room as far as Turkish-Russian cooperation in Syria is concerned.

Nevertheless, Ankara’s deep hatred of Assad appears to have trumped all other diplomatic considerations — and the need for consistency.

“All this has left Turkey looking like a visionless and unreliable country whose next step is difficult to gauge. This also detracts from Turkey’s weight and the seriousness with which others approach it,” Umar said.

Turkish officials, however, see no contradiction in Ankara’s support for the airstrikes against Assad while attempting simultaneously to develop strategic economic and political ties with Moscow.

A government source speaking to Al-Monitor on condition of anonymity underlined that Turkey has consistently said Assad must go. He added that Moscow was aware of this when it gave the green light to Turkey’s operations in northern Syria.

A crack between Ankara and Moscow had already emerged, however, even before the airstrikes, when Russian Foreign Minister Sergey Lavrov said Turkey should hand over areas it captured in northern Syria to the regime. In his angry rebuttal, President Recep Tayyip Erdogan said that was up to Turkey, not Lavrov, to decide.

“We differed with [Russia and Iran] in this case. … We can’t end our ties in other areas because we diverged on this topic,” Cavusoglu told reporters during a press conference with NATO Secretary-General Jens Stoltenberg in Ankara on April 16.

Kremlin spokesman Dmitry Peskov echoed Cavusoglu when he told reporters in Moscow that differences with Ankara over Syria would not affect the cooperation between the two countries in other fields.

The disagreement over Assad, however, remains the elephant in the room as far as Turkish-Russian cooperation in Syria is concerned. Welcoming the strikes against regime targets in Syria, President Erdogan also signaled that Ankara would not give up on its desire to see the back of Assad.

Erdogan also criticized the West for acting in Syria only when chemical weapons are used but remaining inactive when the Syrian regime committed atrocities with conventional weapons.

Such prodding by Erdogan for more operations against Assad is not likely to go down well in Moscow.

Burhanettin Duran, general coordinator of the government-funded Foundation for Political Economic and Social Research, however, believes Turkish-Russian ties will survive this crisis.

“It is pure fantasy to expect the Turkish-Russian cooperation in Syria to be harmed because of this limited and cosmetic intervention by the US, France and Britain,” Duran wrote in an article for daily Sabah.

The relationship between Ankara and Moscow is not based on ideological consideration, but on concrete interests, according to Duran. “Despite differences, it is in the interest of both sides to keep this rational relationship going.”

There are some, though, who are close to Erdogan’s ruling Justice and Development Party (AKP) but who feel that a breakup between Turkey and Russia and a return by Ankara to the Western fold would not be such a bad thing.

Mehmet Ocaktan, a former member of parliament from the AKP who currently writes for daily Karar, believes that the intervention by the United States, France and Britain showed that Russia is not the only actor in Syria.

“If Turkey takes the right steps after this, it can gain a strong position, not only in its ties with the West but also for its regional policies,” Ocaktan wrote in his column.

Sedat Ergin, a veteran foreign policy commentator for daily Hurriyet, however, wrote that the reasons that forced Turkey, Russia and Iran to act together in Syria still exist.

“The interests and political calculations that kept these three countries together under the Astana process are weightier than the topics that they differ over,” Ergin wrote.