Russia sees benefit of nudging Turkey on to Manbij in Syria

Despite their divergent strategic goals, the leaders of Iran, Russia and Turkey have agreed to work together in Syria while further excluding the United States from the decision-making process. 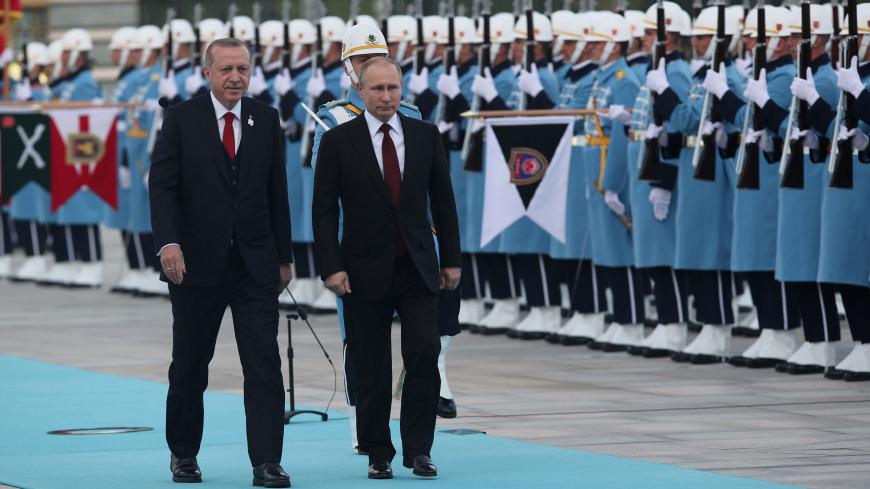 Russia might be indirectly encouraging Turkey to advance toward Syria’s northeastern town of Manbij while further sidelining Washington from the Syrian scene after President Donald Trump voiced his plans to withdraw US troops from Syria, sources familiar with the situation hinted after a summit on Syria last week in Turkey.

All eyes were on the tripartite Syria meeting that gathered the top leaders of Russia, Iran and Turkey on April 4 in Ankara, where they met to discuss how to end the war in Syria.

Russian President Vladimir Putin, Iranian President Hassan Rouhani and Turkish President Recep Tayyip Erdogan have somehow maintained an unlikely alignment for the past year and a half despite their diverging end games in Syria.

Turkey wants to keep Iran at bay, limit its influence in Syria and has long wanted Syrian President Bashar al-Assad to be ousted. Russia wants closer ties with Turkey, but also needs the current Syrian regime in place to maintain its military bases, dominate the eastern Mediterranean and control Syrian airspace. Iran also needs Assad in place to maintain its supply lines to Islamist militant group Hezbollah in Lebanon and establish a secure corridor to Lebanon via Iraq and Syria, and thus wants to keep Turkey away from the latter two.

Yet at their meeting last week, the trio united on opposing Washington.

Russian-Turkish relations have been going well for the past two years. Indeed, Erdogan and Putin officially met eight times and had 29 phone conversations in 2017, according to pro-government Turkish media outlets. This indicates the personalized nature of the relationship and shows the rapprochement between Ankara and Moscow is a top-down process.

However, it remains to be seen if they can translate their fledgling strategic bonds into long-term cooperation in Syria, as Assad's future is unclear, as is the Kurds’. It's also uncertain how developments between the United States and Turkey will unfold.

So what were the outcomes of the Ankara summit?

According to Kerim Has, a Moscow State University lecturer, the most concrete and clear result of the summit was the emphasis of all sides on Syria’s sovereignty, independence and territorial integrity. It's clear that neither the negotiators nor the forces on the ground will accept the creation of a sovereign patch in Syria under Ankara’s control.

“This emphasis attracted attention both in their joint press briefing and in the joint statement they issued. Turkey has thus renewed its commitments to Syria. I believe both Moscow and Tehran wanted Turkey to reaffirm its commitments following the Euphrates Shield and Olive Branch operations [Turkey's military incursions in Syria],” Has told Al-Monitor.

The situation in Syria's Idlib was also an important issue at the summit. Idlib is one of the last major rebel hotspots; just yesterday, April 9, it was rocked by a deadly explosion. Early reports said the blast of undetermined origin killed at least 11 people and wounded 80-110.

Idlib has a significant strategic value for Russia, which would like to wrap things up there so it can declare “mission accomplished” for its military operations.

At the summit, leaders discussed Ankara’s commitment to set up 12 observation posts to supervise the cease-fire, including one in Idlib. Russia has been pushing Turkey to accelerate its work, and Ankara announced last week it had completed an Idlib de-escalation station.

Why is Russia insisting on de-escalation outposts in that area? Although not said in so many words, no doubt Russia wants to keep an eye on pro-Iran Shiite militias that are trying to expand their presence from southern Aleppo toward Idlib and thus fill the power vacuum in parts of the region that emerged after the influence of radical Salafist-jihadi groups waned.

Meanwhile, Turkey would like to "liberate" Manbij from the People's Protection Units (YPG), which Ankara considers a Kurdish terrorist group. Although Moscow doesn't necessarily want to see further escalation in that area, sources say Russia might be nudging the Turkish military to enter Manbij to disrupt Ankara's ties with Washington and NATO. The United States has special operations units in Manbij, and there is a risk of direct confrontation. The United States has repeatedly warned Turkey not to advance toward Manbij.

As for the summit, Has noted that Moscow’s priority is to achieve a political settlement in Syria via peace talks in Astana and Sochi — which would then be ratified in Geneva. “The role of the Syrian Sunni opposition and the fates of militants still determined to fight the regime until the end are not matters Moscow could cope with alone simply by enlisting Ankara and Tehran,” he said. In other words, peace will require cooperation among all Syrian parties.

The summit itself did nothing to clarify ambiguity over whether the Astana and Sochi processes will produce a settlement that includes the Syrian Kurdish groups closely allied with Washington. The joint Ankara declaration published after the summit didn’t mention Syrian Kurds, a telling sign that Ankara hasn't been able to persuade Moscow and Tehran to align with Turkey’s views on the issue. Putin, on the other hand, very clearly expressed the day before the summit that he believes the moderate Kurds have a place at the negotiating table.

"We are convinced that the Kurds are part of Syria’s multiethnic people and have the right to take part in all political processes, to find their place in future Syria," Putin said, according to a report from the Russian-owned Tass news agency. “Naturally, we are convinced that any such processes should continue with maximum coordination between all the parties concerned."

The summit did confirm that Turkey’s Operation Olive Branch has reached its southern limits, as there is no further YPG threat from that direction.

Contrary to Erdogan’s recent statement that the Turkish army will take control of the Tell Rifaat region, in his post-summit remarks he said Turkey will work with Russia and Iran, indicating that Moscow and Tehran have not given the green light for Turkey's army and its ally the Free Syrian Army (FSA) to expand south of Afrin city.

In Turkey, which has entered a critical election process, it's essential for Erdogan to consolidate his conservative and nationalist power bases and continue with the operations in northern Syria for the sake of domestic political consumption, enabling him to grab votes even from opposition parties. And after the Ankara summit, Turkey doesn’t have another option but to expand Operation Olive Branch to the east to Manbij and then east of the Euphrates River.

Northern Syria is likely to be the hottest region of that country this summer, when Turkish troops and the FSA will be looking to the east toward Manbij — where US and French troops are currently patrolling — and not to the south toward Tell Rifaat, which is currently under the control of Assad's forces and Russia's close monitoring.