Ankara is increasingly concerned that Washington is working with Moscow to secure an accord for northern Syria between the Bashar al-Assad regime and the Kurds. 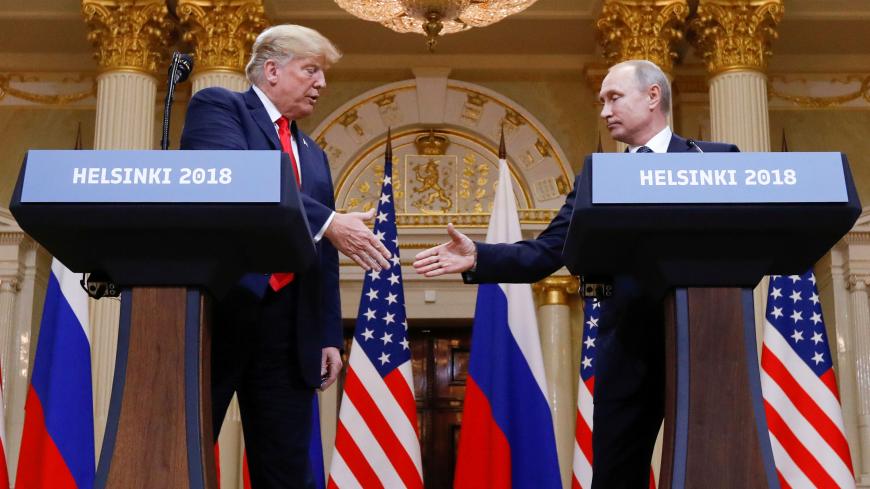 The summit between US President Donald Trump and Russian President Vladimir Putin in Helsinki was watched very closely in Turkey. Ankara’s focus, however, was on what it may produce for Syria, rather than the issues that created a storm in the United States and Europe.

Ankara is disconcerted by recent reports in the American press of behind-the-door talks between Washington and Moscow about US forces leaving Syria on the condition that Russia limits Iran’s influence in that country.

Military gains by the Bashar al-Assad regime in southern Syria, with active support from Russia, while the United States backed off from supporting opposition fighters have also heightened Ankara’s concerns.

The implications of any US-Russian deal for northern Syria are at the heart of Turkish fears. Turkey wants to clear US-backed Kurdish People's Protection Units (YPG) fighters in northern Syria and prevent an autonomous Kurdish entity from emerging.

Reports that Washington is working with Moscow to secure an accord for northern Syria between the Assad regime and the Kurds in areas currently controlled by the YPG are increasing Ankara’s concerns.

President Recep Tayyip Erdogan is trying to jockey himself into a position between Trump and Putin that would give him a decisive say on what happens in Syria.

Traveling back from last week’s NATO summit in Brussels, Erdogan told reporters he planned to talk to Putin prior to the Helsinki summit and invite him for talks after the summit.

“This would be a meeting to discuss regional issues. If he accepts this after Helsinki, it will be good for us,” Erdogan said.

He added that other regional countries could also attend the meeting that he planned to propose to Putin. “I think we can make the situation in the region more stable in this way,” Erdogan said.

In a further indication of the close tabs he is keeping on the US-Russian talks, Erdogan also held a phone conversation with Trump immediately after the Helsinki summit, even though the two had met only a few days earlier during the NATO gathering when they discussed Syria.

Ilter Turan, a professor in the department of international relations at Bilgi University in Istanbul, believes Erdogan is justified in his concerns about a US-Russian deal for Syria.

“If the two superpowers arrive at an arrangement, it is unlikely that they are going to be too sensitive about what other countries say about this,” Turan told Al-Monitor.

Turan also pointed to Trump’s controversial performance during his recent visit to Britain, at the NATO summit and his statements in Helsinki. “Relying on Trump for anything would be misplaced because he does not take anyone seriously,” Turan said.

“For America, the main issue now is containing Iran. For Russia, it is to remain in Syria. So it would not be difficult for Moscow to dump Iran if a favorable agreement with the US can be reached,” he added.

The Kurdish issue is emerging as the single most important agenda item for Ankara now, as a Syrian endgame of sorts appears to be in the making after the regime’s victory over the mainly Turkish-backed Free Syrian Army (FSA) in the south.

Turkey relies on its burgeoning ties with Russia to counterbalance its deteriorating ties with the West. Nevertheless, calls from Moscow for Turkey to hand over areas it captured from the YPG in northern Syria to the Assad regime have caused irritation in Ankara.

“Pressure on Turkey to pull out of areas it currently holds will increase if a Syrian settlement is reached with US and Russian backing,” Turan said.

He added that Turkey does not have the necessary leverage to withstand these pressures in the long run.

Russia’s plans for the Kurds in any future constitution for Syria — a topic that is expected to be revived in the coming weeks — also represent an area of uncertainty for Ankara. Turkish officials are aware that Washington and Moscow do not share their concerns regarding the YPG and the Syrian Kurds.

Remarks by Alexander Lavrentiev, Putin’s special envoy for Syria, regarding the Syrian Kurds only add to Ankara’s dissatisfaction.

“The Kurds will take part in the Syrian Constitutional Committee anyway," Lavrentiev was quoted as saying by Al-Monitor’s Anton Mardasov, after a meeting of Russian, Turkish and Iranian officials in Geneva in June.

"Their representatives will be included in every faction: opposition groups, the government’s delegation and civil society. We ask everyone to abstain from dividing the Kurds into pro-Turkish, pro-Russian or PYD [Democratic Union Party] and YPG [People's Protection Units] categories, the latter of which is viewed negatively in Ankara,” Lavrentiev added.

Erdogan told reporters on his way back from Brussels last week that “Turkey had no issue with the Kurds, but with terrorists who are trying to carve out a terrorist region in northern Syria.” Turkey is also trying to select Turkey-friendly names to represent the Kurds in talks for a new Syrian constitution.

Given that Assad will ultimately have to negotiate with the YPG and PYD in northern Syria if pushed by Washington and Moscow, Ankara’s task does not appear easy.

Meanwhile, the Turkish side is upset at reports that Russia is warning the FSA that Idlib in the north will be the regime’s next target following its successful operations in the south.

Turkey has troops deployed in Idlib in so-called de-escalation zones agreed on by Russia, Iran and Turkey.

Some of the opposition fighters streaming into the region after being defeated in the south are listed as terrorist groups by Moscow and are seen as legitimate targets. These include Hayat Tahrir al-Sham, which many claim is supported by Turkey.

Erdogan reportedly issued a counter warning during his phone conversation with Putin before the Helsinki summit, saying that any move against Idlib would destroy the Astana peace process for Syria, which is sponsored by Moscow, Ankara and Tehran.

Apart from the prospect of losing Idlib to the regime, Ankara is also worried about a new influx of refugees from the region. That could leave it facing a crisis like the one Jordan now faces after regime forces defeated the opposition in Daraa.

Turan pointed to another dilemma for Ankara regarding Syria. Referring to the $11.2 billion budget deficit recorded in the first half of this year, he believes that Turkey’s expenditures on its Syrian operations have contributed to this, and he argues that this could prove to be unsustainable in the long run.

Reflecting some schadenfreude, a Western diplomat talking to Al-Monitor on condition of anonymity argued that Putin had manipulated Erdogan’s anger with the West to great advantage.

“Erdogan’s hatred of the West has strengthened Russia’s hand. Erdogan needs Putin more than the other way around, especially now that Putin has consummated his great friendship with Trump,” the diplomat said.

Erdogan’s choices in Syria may be running out, as developments move in a direction he does not desire.

Still, there is time yet for the endgame in Syria to take shape in earnest — time, that is, for Erdogan to work out a more coherent Syrian policy if he does not want to see Turkey come out as one of the losers of the Syrian conflict.