Has Israel opened the Lebanese front in its battle with Hamas?

An assassination attempt in Sidon against a Hamas military leader appears to have been a pre-emptive Israeli strike warning his movement against attacking it from Lebanon. 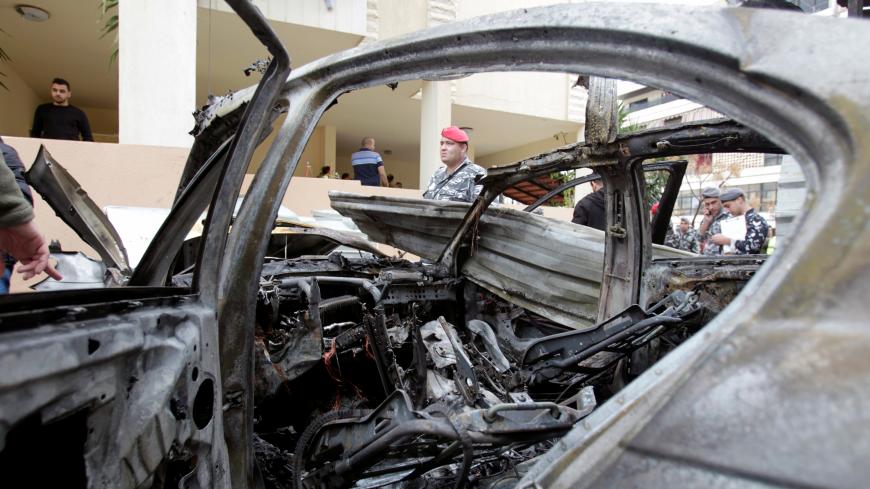 Lebanese policemen are seen next to a bomb-damaged car in Sidon, southern Lebanon, Jan. 14, 2018. - REUTERS/Ali Hashisho

An assassination attempt against a Hamas military leader last month has sparked speculation as to whether Israel and Hamas have opened a northern front in Lebanon in their ongoing struggle. On Jan. 23, Turkey handed over Ahmad Beitiye to Lebanese authorities for suspected involvement in the Jan. 14 car bombing that targeted Hamas leader Mohammed Hamdan in the southern Lebanese city of Sidon, leaving him with an injured leg. Israel did not comment on the assassination attempt, but Hamas accused it of being behind it.

It has become customary for Israel to remain silent after conducting assassinations outside the Palestinian territories — perhaps to escape the immediate wrath of the countries whose laws it has violated — but it will sometimes claim responsibility years later. In December 2016, Hamas accused Israel of killing Mohammed Alzoari, a Tunisian with ties to the Izz ad-Din al-Qassam Brigades, Hamas’ military wing. Assassins shot him at point-blank range in Sfax, Tunisia. Israel is also believed to have killed Mahmoud al-Mabhouh, a Hamas military official, in Dubai in 2010. Hamas accuses Israel of having killed another military official, Izz ad-Din Sheikh Khalil, in Damascus in 2004.

A Hamas official residing in Lebanon told Al-Monitor on the condition of anonymity, “The assassination attempt [against Hamdan] followed meetings between the Lebanese and Palestinian resistance [i.e., Hezbollah and Hamas] in Beirut over the past weeks, during which they reviewed next possible steps for confronting Israel and the possibility of a broad Israeli war on the Gaza front as well as in Lebanon and Syria, in addition to developing a unified resistance strategy.” He added, however, “Although we want to show Israel that Hamas is not easy prey, we do not want our fight to relocate to other areas.”

Hamdan is not particularly well known in media and political circles beyond also being known as Abu Hamza. A Palestinian security source revealed to Agence France-Presse in mid-January that Hamdan is a security official and high-ranking military leader in Hamas. That Mohammad Sadiq Fadhli, Iran's deputy ambassador to Lebanon, visited him in the hospital on Jan. 20 speaks to Hamdan's importance within Hamas.

Qassem Kassir, a Lebanese writer close to Hezbollah, told Al-Monitor, “The attempt to assassinate Hamdan shows the dangers that Hamas currently faces inside and around Palestine. This dangerous security operation is a continuation of previous Mossad operations targeting Lebanese and Palestinian resistance figures [that is, from Hezbollah and various Palestinian factions]. However, this attempt is particularly serious because it targeted an unknown cadre, with no declared activity, and it occurred at a time when the Lebanese and Palestinian resistance are developing a strategic plan to address US President Donald Trump’s efforts to squash the Palestinian cause.”

On Jan. 26, the Lebanese Interior Ministry announced that Israel was indeed behind the attempt on Hamdan's life, reporting that a number of Lebanese suspects under arrest had admitted to having been hired by Israeli intelligence to carry out the attack. This prompted Hamas to praise Lebanese security efforts in a Jan. 31 media statement.

Rishq, who currently resides in Qatar, told Al-Monitor that the attack was not only aimed at Hamas. “The operation also targeted civil peace in Lebanon and constitutes an attack on its sovereignty,” Rishq said. “Hamas met with Lebanese officials to reiterate its keenness to strengthen the fraternal relations between Lebanon and Palestine, asserting that Hamas will not be dragged into external battles with the Israeli occupation and will continue down the path of resistance in occupied Palestine.”

Several other Hamas leaders have also recently emphasized that the movement has no intention of battling Israel outside Palestine — Ali Baraka, the movement's representative in Lebanon, said so on Jan. 14, as did political bureau member Moussa Abu Marzouk on Jan. 27. The latter also stressed that Hamas is present in Lebanon for political reasons and to support the Palestinian people in refugee camps.

Such statements suggest that Hamas is avoiding conflict with Israel in other countries as a matter of policy. Perhaps it wants to avoid problems with other governments or perhaps it simply lacks the operational capabilities to attack outside the Palestinian territories and Israel. These same reasons may, however, encourage Israel to target Hamas members outside the territories.

On Jan. 19, four days after the Hamdan assassination attempt, Israeli Defense Minister Avigdor Liberman told the press that Hamas has been seeking to build infrastructure in southern Lebanon to use in attacks against Israel. Yoni Ben Menachem, a former Israeli intelligence officer, wrote on the website of the Jerusalem Center for Public Affairs on Feb. 1 that the attack on Hamdan could represent the return of an Israeli policy of assassinations against Hamas outside Palestine.

Investigations conducted by Lebanon's Internal Security Forces revealed that the Israelis involved in the attack on Hamdan used Georgian, Swedish and Iraqi passports to exit Lebanon. They are said to be two intelligence officers, one of whom, a woman, planted the bomb under Hamdan's car. The other officer, based out of a rented warehouse facing Hamdan’s home in Sidon, had been tracking him for seven months. The two officers left Lebanon before the bombing. What happened to the third person remains unknown or unannounced.

Lebanese Prime Minister Saad Hariri contacted Turkey on Jan. 20, setting in motion the arrest of Beitiye, while his accomplice, a woman, remains at large. On Jan. 26, the Lebanese press reported that Turkey had rejected an Israeli request not to extradite Beitiye to Lebanon.

Saleh al-Naami, an expert on Israeli affairs for the New Arab news website in Gaza, told Al-Monitor, “Israel’s attempt to assassinate a Hamas cadre aimed to criminalize Hezbollah in the eyes of the Lebanese public and the international community by showing it as giving way to non-Lebanese forces, such as Hamas, to exploit the Lebanese territories to implement attacks against Israel.” He also offered a second reason for the operation, stating, “Israel wanted to warn Hamas about going after it outside Palestine.”

The attempt on Hamdan's life could be interpreted as an indication of Israeli concern about possible Hamas operations from Lebanon and therefore a pre-emptive strike against the movement for fear of a strong front taking shape in Lebanon through the combined efforts of Hezbollah and Hamas. This could well be the beginning of confrontation beyond Palestinian borders.