What's Hamas up to in Lebanon? 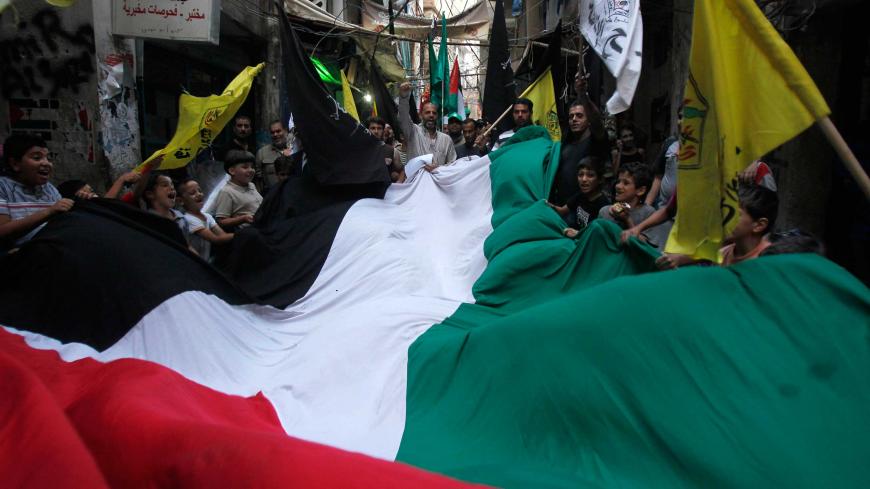 Palestinian supporters of Hamas carry a giant Palestinian flag to celebrate the release of Palestinians in a prisoner swap with Israel, in the Palestinian Shatila refugee camp, Beirut, Lebanon, Oct. 18, 2011. - REUTERS/ Sharif Karim

Israeli Defense Minister Avigdor Liberman has said Hamas is trying to develop a terror infrastructure in southern Lebanon from which to attack Israel. “The organization is in a tough place and is having a hard time carrying out terror attacks from the Gaza Strip,” he said during a Jan. 19 hospital visit to an Israeli special ops officer wounded in an operation to catch the Palestinian terror cell that murdered Rabbi Raziel Shevach Jan. 9 in the West Bank.

As I recently wrote in Al-Monitor, Hamas was responsible for the murder of settler Havat Gilad near an Israeli outpost, and for the first time since its 2014 war with Israel, the organization did not try to blur its involvement in the attack or play down its desire to execute similar ones.

Liberman attributed the organization’s current tactics and distress to the difficulties it has been encountering in carrying out attacks from its base in the Gaza Strip. During the second intifada (2000-2005), Hamas conducted most of its attacks against Israelis from the West Bank, not from Gaza. Today, it would be virtually impossible for a Hamas terror cell from Gaza to overcome Israel’s border fence and other security measures. Also, the tunnels it has dug into Israel were only intended to become operational in case of an all-out war with Israel, and even then, on a limited basis.

The Hamas military wing has always had its headquarters in the Gaza Strip, whereas its infrastructure, including the recruitment of suicide bombers and the establishment of regional military branches, was based in the West Bank. The movement never regarded Lebanon as territory in which it should invest operational resources to serve its military wing in times of need.

During the “honeymoon” period Hamas enjoyed with Syria for more than a decade, when its political wing was based in Damascus until 2012, it maintained a relatively large office in Beirut to service ties with Hezbollah. Their connection focused mostly on cooperation in weapons development, use of joint smuggling routes, sharing information on operational doctrine and use of Hezbollah bases for training Hamas operatives from Gaza. Hamas had no wish, however, to blend into Hezbollah’s ranks. Its senior members under the leadership of Khaled Meshaal guarded their independence, remaining distinct from Hezbollah. They did not entertain the idea of opening another front against Israel from Lebanon.

That was the state of play until Saleh al-Arouri, current deputy head of Hamas' political bureau, arrived in Lebanon last year. In fact, over the past few months, Arouri has been overseeing a change in the strategic concepts of the movement’s leadership.

Arouri was first sighted in Beirut at an August 2017 meeting with Hossein Amir-Abdollahian, the Iranian parliament’s director general for international affairs and assistant to Speaker Ali Larijani. Photos of the meeting also show a member of Hamas’ political department, Osama Hamdan, and the organization’s Beirut representative, Ali Barakhe, in attendance.

Arouri’s arrival in Beirut significantly reinforced Hamas' local representation. Until then, it had served primarily to maintain a presence in Lebanon after the crisis that broke out between Hamas’ political bureau and the Syrian government due to the civil war. The crisis with Syria and Iran also had implications for the relationship between Hamas and Hezbollah, that is, until Arouri’s arrival. Taking advantage of the connections he had forged with senior Hezbollah figures, among them Secretary-General Hassan Nasrallah, and through them with Iranian representatives in Lebanon, Arouri succeeded in reviving Iranian support for Hamas.

Now that the relationship with Tehran has been resurrected, Arouri has moved on to the next stage: creating an operational Hamas infrastructure in Lebanon. His goal is to establish an operations base like the one he set up in Istanbul but with the advantage of being near the Israeli border. Hamas could use such a base to train its operatives in Lebanon, but the facility would also serve a broader purpose — establishing a threat against Israel from the north given the limited ability to threaten it from Gaza in the south because of the siege by Israel and constant pressure from Egypt.

A Palestinian security source speaking on condition of anonymity told Al-Monitor that Hamas’ political and military leadership are feeling under duress. They are finding it difficult to smuggle weapons from Egypt, while its dire economic straits limit the organization’s ability to produce weapons in the Gaza Strip. “They will undoubtedly have an even harder time in the future smuggling advanced weaponry into the sealed-off Strip,” the source said.

Lebanese media reports from Jan. 14 that a Hamas member who had been wounded in the coastal town of Sidon testified to the presence of Hamas operatives in the country. According to the reports, Mohammed Hamdan, also known as Abu Hamza, was injured when a bomb exploded under his car. Hamas was quick to accuse Israel of an assassination attempt, a charge reinforced by residents’ claims of seeing an Israeli drone overhead at the time of the explosion.

Initial reports identified Abu Hamza as a relative of senior Hamas official Osama Hamdan, but the claim was later denied. Hamas representatives stated firmly that despite the similar family name, the two men are not related.

The attempted assassination, whether by Israel or someone else, exposed the Hamas office in Sidon, some 30 miles from the border with Israel, run by Ayman Shan’a. This office appears to serve as a frontline for the operational infrastructure of which Liberman spoke.

Hamas’ military and political leaders, among them Arouri, probably do not believe they can establish an operational threat against Israel significant enough to disrupt life in the Galilee. If they are forced to engage in another armed clash with Israel, however, and feel that their control over Gaza is threatened, Hamas could use its presence in southern Lebanon to mobilize the support of Hezbollah and maybe even drag the Lebanese outfit into all-out confrontations with Israel.