Israel has demanded that Turkey expel Hamas activist Salah Al-Arouri from Istanbul as a condition for normalizing bilateral relations. 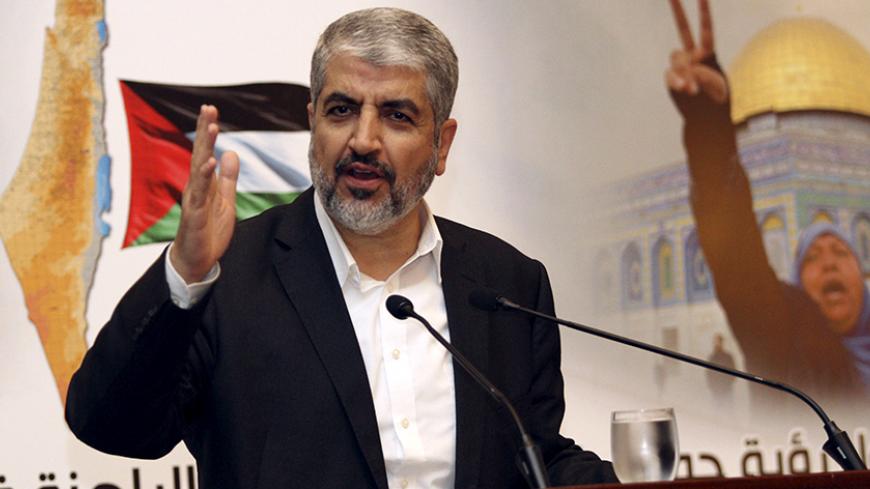 Two days after it was reported that Israel and Turkey had reached a series of understandings ultimately leading to their reconciliation, the head of Hamas’ political bureau, Khaled Meshaal, met with Turkish President Recep Tayyip Erdogan in Istanbul.

According to Turkish media reports, on Dec. 19, the two men discussed “developments in the Middle East.” As far as Hamas was concerned, this meant Turkey’s decision to reconcile with Israel and the eventual price Hamas will have to pay for it. For example, one of the Israeli conditions was that Turkey expel senior Hamas official Salah al-Arouri. In December 2014, Al-Monitor reported that Arouri had established his own “bureau” in Istanbul and that it operated quite independently from the rest of the movement. This had been a source of trouble for Hamas’ multiheaded leadership on more than one occasion.

Arouri had been expelled from Israel in April 2010, at the height of negotiations for the release of kidnapped soldier Gilad Shalit. He asked to be sent to the Gaza Strip, but Israel preferred to banish him from all Palestinian territory under the assumption that his presence in Gaza would pose a threat to Israel. By the time the Hamas prisoners were finally released in 2011 in the deal, Arouri was already in Istanbul, busy establishing a bureau there. It was Arouri who took in the most serious prisoners released by Israel in the Shalit deal, the ones that no other country would take.

These Hamas activists, who arrived in Istanbul with Erdogan’s consent, significantly strengthened Arouri in the internal struggles that have plagued Hamas since Israel assassinated Sheikh Ahmed Yassin in 2004. The Arouri bureau became yet another power base jockeying for position within the movement. It has been a major headache for the movement’s leadership in Qatar (Meshaal) and Gaza (Ismail Haniyeh).

Without exception, Hamas' leadership will continue to speak of the importance of waging jihad against Israel, but there are also other circumstances at play — namely, three bloody wars in Gaza that left thousands dead and wounded and basic infrastructure destroyed. This has taught Hamas leaders that an ideal situation might exist, but they must also contend with reality. In other words, they can talk all they want about the importance of armed struggle against Israel, but there is a long way from talking to putting statements into practice. Arouri, on the other hand, has yet to learn what Meshaal, Haniyeh and even the heads of the military wing of Hamas in Gaza, Mohammed Deif and his predecessor Ahmed Jabari, learned long ago.

To bolster his status in the organization, Arouri began a process the Palestinians call “strengthening the groundwork.” What it means is establishing an active organizational infrastructure capable of launching attacks against Israel. While the rest of the Hamas leadership was still licking its wounds after Egypt closed its border crossings and flooded the smuggling tunnels, Arouri focused on one thing only: improving his status and strength outside the occupied territories, but still within the Hamas framework.

Thus in summer 2014, Arouri encouraged the Qawasmeh clan in Hebron to conduct a kidnapping operation in the West Bank. He did this without Meshaal or Haniyeh knowing about it and while they were trying to form a unity government with President Mahmoud Abbas to save Gaza. The rest is history. Hamas may have been hoping to rehabilitate and rebuild Gaza through a unity government, but instead it was forced into the harshest, bloodiest and most violent armed conflict the movement has faced.

It began with Operation Brothers’ Keeper to locate the three Israeli youths abducted June 12 and murdered, continued with the re-arrest of prisoners released to the West Bank in the Shalit deal and ended with Operation Protective Edge, which left Gaza bleeding profusely and Hamas worrying about its future.

Since Protective Edge, the Hamas leadership has sustained the cease-fire agreement with Israel, including the movement’s military branch, normally the most recalcitrant link in the organization. At this point, no one in Hamas is even considering another round of violence with Israel. All its leaders, except Arouri, realize that another confrontation would be suicide for them. The movement’s leadership is currently isolated, and Gaza's survival depends on Israel’s willingness to provide it with food and raw materials.

One tangible example of how reluctant Hamas’ senior leadership and activists are to engage in a confrontation at this stage is their response to the ongoing “intifada of knives.” Hamas is not participating in the uprising apart from providing moral support to the young people involved. Even that is nothing more than lip service. Not one Hamas leader has even considered offering his patronage, and it goes without saying that none will play a leadership role.

Arouri is also credited with blowing up the reconciliation talks between Hamas and the Palestinian Authority. During Operation Protective Edge, Shin Bet Director Yoram Cohen met with Abbas to present him with evidence that Arouri had established infrastructure in the West Bank that was plotting a coup against the PA. Abbas then presented this evidence to Meshaal at an August 2014 meeting with him and the emir of Qatar, Tamim bin Hamad Al Thani. It was obvious that Meshaal knew nothing of the plan, just as he knew nothing about the plan to kidnap the three Israeli youths.

Arouri’s expulsion from Istanbul and the dismantling of the branch office operated by him and for him is good news for Meshaal, especially since Erdogan is insisting that Israel lift the blockade on Gaza as a precondition for normalizing relations. Erdogan is dangling two carrots in front of Meshaal: a significant easing of the blockade (which Israel is interested in implementing as long as there are Turkish assurances that weapons and ammunition will not be smuggled into Gaza) and the dismantling of a rogue branch office in Istanbul that has been going over the heads of the movement leadership.

Alon Liel, a former Israeli ambassador to Turkey, is an authority on the relationship between the two countries. He told Al-Monitor, “Erdogan’s interests in reconciling with Israel are obvious. Nevertheless, Erdogan and Turkey will continue to regard Hamas as a ‘little sister.’ I am sure that Erdogan will continue to be a friend of Gaza and Hamas. Arouri is the weak link, so he can be dropped.”

Where will Arouri go from Istanbul? It's hard to tell. It won’t be easy for him to find another country willing to take him in right now and allow him to build a new base on its territory. Yemen or Sudan might be options of last resort, but Arouri will have a hard time recreating his previous successes from either of those countries.

“There is so much the region could gain from such a normalization process,” Erdogan told reporters Dec. 14. As it turns out, Hamas has a lot to gain as well, namely the lifting of the blockade on Gaza on the condition of ending the armed struggle against Israel. Actually, the movement has no other option.