New 'rules of the game' for Israeli-Hamas standoff

The expulsion from Qatar of Hamas leaders and the movement's reconciliation with Iran has potentially changed the "rules of the game" between Israel and Hamas. 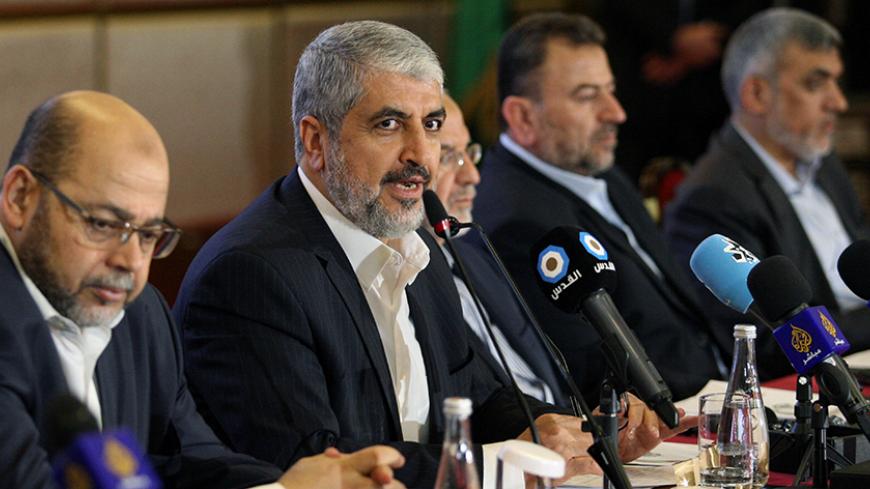 Salah al-Arouri is the first senior Hamas figure forced to leave Qatar at the height of the diplomatic upheaval currently gripping the Gulf emirate. He was accompanied on his June 4 departure by Moussa Dudin, a former West Bank resident freed from an Israeli prison in the 2011 prisoner exchange deal with Hamas for Israeli soldier Gilad Shalit. After his release, Dudin joined the Hamas “bureau” built by Arouri, first operating out of Turkey and then Qatar, to carry out attacks against Israelis in the West Bank.

Hamas' political bureau set up its headquarters in the oil-rich principality in January 2012, when its top officials abandoned Damascus at the start of the civil war there. Then, as now, the distance between the Gaza Strip and Hamas' offices abroad was not only geographic. It also had profound repercussions for the movement’s future. When former political bureau chief Khaled Meshaal left Damascus for Qatar, the movement’s entire orientation changed. Hamas transformed from an organization joined at the hip with Syria and Iran into a lackey of the wealthy Gulf emirate, benefiting from its bounty and carrying out its orders.

The rupture with Iran and subsequent move to Qatar’s side brought Tehran’s weapons supply and funding of Hamas almost to a complete halt. Were it not for the lifeline thrown to Meshaal by the Qatari emir, Tamim bin Hamad Al Thani, it is unlikely that Hamas would have survived the storm that has swept the Arab world.

Since Hamas' founding 30 years ago, the movement has been forced to adapt itself to whichever sponsor is willing to pay. The countries that severed ties with Qatar in recent days have accused the emirate of funding terrorism. In the case of Hamas, however, the opposite is true. Unlike Iran, Qatar forced the movement to moderate itself, relatively speaking, of course.

Even before the current Qatari crisis erupted, Meshaal’s successor as head of the political bureau, Ismail Haniyeh, had begun making entreaties toward Iran. According to a report in the London-based Asharq al-Awsat, Hamas and Islamic Revolutionary Guard Corps representatives met in Beirut on May 31 in the presence of Hezbollah officials. The reconciliation resulted in agreement on the renewal of Iranian financial assistance to Hamas.

In September 2016, the newspaper had cited reliable sources as saying that Iran was actively working for Haniyeh’s election to replace Meshaal. Haniyeh was indeed elected, and Iran is once again playing a major role in the Palestinian arena, much to the delight of the heads of Hamas' military wing, the Izz ad-Din al-Qassam Brigades.

After relations were severed with Iran, the leaders of the brigades began urging the political echelon to reconcile with Tehran, if only to ensure the movement's military buildup. With Meshaal in office, however, they were unsuccessful (and they did not forgive him for his “treachery”). That is why the meeting in Beirut was probably held after the Qatari tensions erupted. Apparently, the reason for the meeting was not only because Hamas understood which way the Qatari winds were blowing or to respond to the current tensions by restoring Iran to past glories. In fact, the reasons for the meeting run much deeper. Regardless of whether the timing was coincidental or planned, the fact is that Hamas is once again an Iranian proxy.

The Hamas rapprochement with Tehran could evolve into a crisis with Egypt. Hamas' leader in Gaza, Yahya Sinwar, was summoned to Cairo for talks on June 4 with the heads of Egyptian intelligence. Hamas once again finds itself at a crossroads, but this time the situation is more complex than in the past. If Hamas gives Iran a foothold in Gaza, as demanded by the military wing, it will doom the movement’s attempts to get closer to Egypt and win the trust of President Abdel Fattah a-Sisi. If, on the other hand, it gives in to Egyptian pressure and turns its back on Iran, Hamas will lose the only sponsor willing to fund its activities. Until recently, the various Hamas factions were deeply divided over the default options regarding what’s better for the organization, Qatar or Iran — that is, Qatari money, primarily designated for civilian infrastructure in Gaza, or Iranian money, allocated for Hamas’ military buildup. Given recent events, this choice is no longer relevant. It would seem that Qatar can no longer keep propping up Hamas, leaving Iran the only option.

According to a report by the Lebanese Al Mayadeen network — the first to report the “outside pressure” on Qatar to kick out the heads of Hamas — the list of Hamas expellees from Doha signals Israeli involvement. All the names were of people mentioned during interrogations of Hamas prisoners in Israeli jails. In other words, Israel, whether directly or indirectly through Egypt and Saudi Arabia, exerted pressure on Qatar, which had no choice but to give in.

This is not to say that Israel somehow pushed Hamas into Iran’s arms. Attempts at such a rapprochement had begun much earlier. One thing, however, is clear. Israel is alarmed by Iran’s return to the Gaza Strip, as was the case during the second Palestinian intifada that started in 2000 when the Hamas military wing was the executive arm of Tehran.

Israel’s security agencies, as well as its diplomatic echelons, have been operating on the assumption that Hamas is under threat, experiencing severe economic and military hardship, and thus had no desire or ability to change the “rules of the game” established after Israel’s destructive 2014 Operation Protective Edge in Gaza. In other words, Israel’s assessment until now had been that Hamas was not interested in opening a new front against it in the near future.

Now, it seems, Israel will be forced to change its policies toward the Gaza Strip in general and Hamas in particular. Any Iranian imprint will be regarded as a security threat to Israel. On the eve of Operation Protective Edge, Prime Minister Benjamin Netanyahu asserted, “Hamas is responsible and Hamas will pay,” signaling that Hamas would be held responsible for any rockets fired from Gaza at Israel. This is just as relevant today. If Hamas in the era of Haniyeh and Sinwar opens the gates of Gaza to Iranian military influence, Hamas will pay.