With appointment of new deputy chief, Hamas leadership more militant than ever

The appointment of Saleh al-Arouri as Hamas’ No. 2 reflects the movement's desire to preserve ties with Iran, Hezbollah and Syria, and could mean trouble for political bureau chief Ismail Haniyeh. 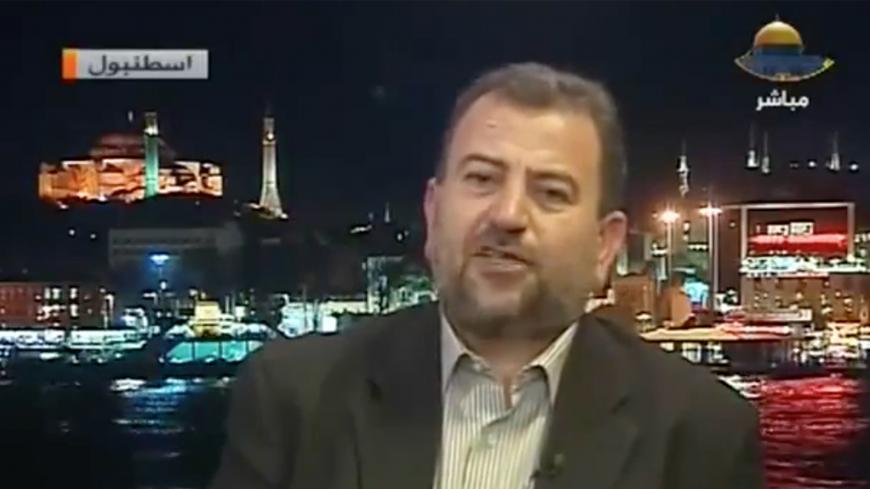 The appointment of Saleh al-Arouri as deputy head of Hamas' political bureau completes the overhaul of the movement’s leadership since the departure of Khaled Meshaal as bureau chief this past summer. The leadership now consists of Meshaal’s successor on the bureau, Ismail Haniyeh, born in Gaza’s al-Shati refugee camp; the movement's leader in Gaza, Yahya Sinwar, a Khan Yunis resident; and Arouri, Haniyeh’s deputy and a native of the West Bank village of Aroureh, near Ramallah. The triumvirate's members are all second-generation Palestinians from Gaza and the West Bank, grew up in poverty and hardship in teeming refugee camps, and worked their way to the top of the pyramid.

Arouri has been living outside the Israeli-occupied territories in recent years. After his release from an Israeli prison in 2010, he was banned from living in the West Bank and Gaza and ended up in Turkey. In 2015, the Turks expelled him. He moved to Qatar, only to be expelled from there in 2017. Arouri now resides in Beirut. Previous Hamas leaders — Meshaal, Moussa Abu Marzouk (from Rafah, in Gaza) and others — could have settled in the besieged Gaza enclave, but chose instead to live in more luxurious surroundings. Arouri, however, has no choice but to live abroad.

The transformation of Hamas' leadership was clearly reflected in the manner of Arouri’s selection for the No. 2 position. In the past, the Shura Council, the top religious and decision-making body of the Islamist movement, made decisions on all issues of significance, such as the leadership structure and ideology. In Arouri’s case, however, Haniyeh, Sinwar and Mohammed al-Deif, leader of Hamas' military wing, picked Arouri, leaving the Shura Council to rubber-stamp the appointment.

In fact, the Shura Council's standing had begun to erode in 2004 after Israel assassinated Hamas founder Sheikh Ahmed Yassin, who deferred to the council on every decision despite his indisputably strong leadership, granting it respect and ultimate authority. The council was further diminished during the tenure of Ahmed Jabaari, head of the military wing, whom Israel assassinated eight years later. It now stands devoid of any real influence.

The decision by Haniyeh, Sinwar and Deif to make Arouri second-in-command adheres to the principle that at least one member of the top leadership resides beyond Israel’s reach, so it cannot wipe out the entire top echelon. This guideline was adopted after the assassination of Yassin and Hamas co-founder Abdel Aziz al-Rantisi over the course of two months, April and May 2004.

Under the leadership of Prime Minister Ariel Sharon and Defense Minister Shaul Mofaz, Israel decided that wiping out Hamas' political leadership was the best way to stop suicide bombings by its emissaries. Following the blow to its leadership, and fueled by concern for its survival, Hamas adopted two strategic decisions. One was to appoint the head of the political bureau at the time, Meshaal, to lead the movement, mainly because he was living in Damascus and not easily reachable by the Israeli Apache helicopters used to kill some of his colleagues. Since then, the head of the political bureau has also served as the movement’s overall leader. The second decision was to pull the plug on the suicide bombings and turn Hamas into a political movement to compete with Fatah for leadership of the Palestinian Authority (PA).

Arouri’s appointment once again leaves Abu Marzouk, political bureau founder, out of the loop. He also lost out to Haniyeh in the recent competition to lead the movement. Abu Marzouk twice saved Hamas from oblivion by managing to raise funds for its survival from Islamist foundations around the world. He used the funds to arm the military wing, the Izz ad-Din al-Qassam Brigades, after Israel arrested Yassin in 1989 and again during the second Palestinian intifada, 2000-2005. Unfortunately for Abu Marzouk, no one remembers his crucial contributions. He is now considered a member of the old guard and has been left behind, disappointed and powerless.

Arouri’s promotion reflects the new leadership’s desire to preserve and improve relations with Iran, Hezbollah and Syria. It believes Arouri to be the right man for the task, whereas Abu Marzouk is considered pro-Egyptian and a welcome guest in Cairo. Thus, Arouri is expected to bolster and maintain the Tehran-Damascus-Hezbollah axis.

The current goals of the movement and the composition of its new leadership appear to be divergent. On the one hand, the heads of the movement are maneuvering to end the 10-year siege by Israel and Egypt against Gaza and its 2 million residents. They understand that this can only be achieved through diplomatic means — that is, through Egyptian mediation. That is why Hamas leaders have embraced Egyptian-sponsored reconciliation efforts with Fatah, which controls the PA. To ensure Hamas’ survival, they are even willing to sever ties with their mother ship, the Muslim Brotherhood, to appease Egypt, its savior and Brotherhood nemesis.

On the other hand, the new Hamas administration is the most militant the movement has known. Sinwar and Arouri are among the founders of the military wing. The two of them, along with Deif, are creating a leadership system of a distinctly military bent. This group, however, has been forced to shift its thinking, perceptions and strategies. Although a jihadist movement dedicated to Israel’s destruction, it now has to put all its energies into its survival.

Haniyeh is the only member of the ruling triumvirate who did not rise through the ranks of the Qassam Brigades. Will he be able to harness his colleagues’ military leanings? In the past, Haniyeh always tried to appease the movement’s military leaders, whom he feared and apparently still does, despite his seniority. Even if he has his doubts about Arouri’s appointment as his deputy, he is being forced to bow to the collective will, so Deif and Sinwar can have one of their own flesh and blood in a senior leadership position.