The election of Saleh al-Arouri as deputy head of Hamas’ political bureau reflects a shift in the movement toward leaders with strong local ties in the Palestinian territories. 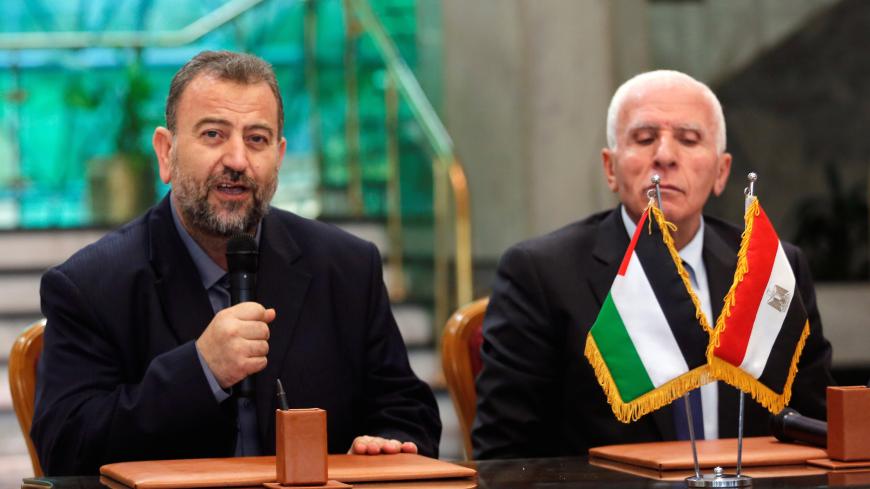 Hamas announced the appointment of Saleh al-Arouri as deputy head of its political bureau Oct. 9. During a recent meeting of Hamas’ Shura Council, which included representatives from the West Bank, Gaza and outside Palestine, the movement wished him success and expressed its pride in his jihadi past. The date and the place of the meeting, along with the identities of attendees, were not made public.

Arouri's appointment is the last chapter in an internal reshuffling of Hamas this year. The process began in February, with the selection of Yahya al-Sinwar as the movement's leader in Gaza. In May, the organization selected Ismail Haniyeh to head the political bureau from Gaza. For the past 20 years, the movement’s organizational authority has been based abroad, but this year's elections are remarkable for the elevation of local leaders.

Hassan Yusuf, a senior Hamas leader in the West Bank, told Al-Monitor, “Arouri is a one-of-a-kind figure with a military background. He served several terms in Israeli jails, for 15 years. Hamas leaders testify to his sagacity, and consider that his involvement as deputy head of the movement will give the Palestinian internal scene more importance.”

Yusuf added, “It is remarkable that Hamas elected Haniyeh, from Gaza, as its leader, and Arouri, from the West Bank, as its deputy head. This means that the election of Arouri is restoring the significance of the occupied territories, in particular the West Bank, where the real conflict with the Israeli occupation happens.” Arouri, who hails from Ramallah, has a strong personal network on the West Bank.

Arouri is a Hamas veteran who joined the movement in 1987, the year of its founding. He was detained intermittently between 1992 and 2007 for various activities against Israel, in particular for his role in establishing the Izz ad-Din al-Qassam Brigades, the military wing of the movement, in the West Bank. Because of his activities, in 2010 Israel deported him from Palestine. That same year, Arouri was elected to be a member of Hamas’ political bureau. In September 2015, the US Treasury Department imposed sanctions against Arouri for providing financial support to Hamas, including transferring hundreds of thousands of dollars for the Qassam Brigades to buy weapons, and organizing attacks against Israel.

From 2010 to 2017, he bounced between Syria, Turkey and Qatar, before finally winding up in Lebanon. Arouri participated in the negotiations of the prisoner exchange deal with Israel involving the soldier Gilad Shalit in 2011. More recently, he has led the Hamas delegation that conducted reconciliation talks with Fatah.

Abdel-Sattar Qassem, a professor of political science at An-Najah National University in Nablus, told Al-Monitor, “Arouri’s election sends many messages from Hamas to several sources. The first, for the Palestinian Authority [PA] and Israel, is that despite the ongoing reconciliation talks, Hamas will not give up its weapons. Hamas’ orientation toward Iran and Hezbollah has become clear. Arouri represents Hamas' military line. He is currently residing in Beirut’s southern suburbs, Hezbollah’s main stronghold, and enjoys the protection of the party. Thus Hamas has no other choice but to follow Iran [which supports Hezbollah].”

Qassem further remarked, “Following the election of Arouri and Sinwar, the upcoming days may witness a reconciliation with Syria. However, the impact of Arouri’s election on [Hamas] carrying out armed operations on the West Bank is dependent on the movement’s operational abilities. I believe the movement is currently unable to do this in light of the complex security situation in the West Bank.”

Israel’s Shabak (Shin Bet) had in April accused Arouri of supervising the training of Palestinian youths studying abroad, without specifying in which countries, to conduct military activities against Israel in the West Bank. Israel did not hide its displeasure about Arouri’s election, and the Israeli media rushed to discuss the implications for the movement's political and military actions with regard to Israel. In the lead-up to the 2014 war in Gaza, it was Arouri who asserted Hamas’ responsibility for the kidnapping and killing of three Israeli settlers in June in Hebron.

The Israeli NRG website described Arouri as a smart personality, supporting close relations with Iran to strengthen Hamas’ military wing. Israel’s Channel 10 called Arouri's election a message that Hamas is not going moderate and that this could affect Israel’s long-term security situation. Israel Today reported that Arouri’s elevation confirms that Hamas wants to take control of the West Bank, one of its strategic goals, adding that Arouri is a smart and determined enemy who will continue to irritate Israel.

Muhammad Hamadeh, an independent Palestinian expert on Israeli affairs, told Al-Monitor, “Israel is concerned about Arouri's election, because it knows him very well. Israel is also aware of his charisma and his value to Hamas and does not see his election as a random event, but as a strong message against it. Israel may also see his appointment as deputy head of Hamas’ political bureau as a declaration of war. Israel could end up assassinating him in the event of military developments in the West Bank.”

On Oct. 1, the Israeli Center for the Judiciary called on INTERPOL to arrest Arouri for planning attacks against Israelis. Israel had on Sept. 28 protested to Russia about hosting Arouri as part of a Hamas delegation that visited the country Sept. 19. The visit aimed at bolstering ties between the movement and Russia, with the delegation discussing the latest developments in Palestine, the reconciliation with Fatah and Russia’s role in the Palestinian cause.

Mahmoud Merdawe, a Hamas member and former prisoner who has close personal relations with Arouri, said, “Arouri's election to this high-ranking position in Hamas is due to the importance of the West Bank to the movement and its status in its future strategy, for he is considered the most capable person for assessing the West Bank’s needs due to his personal network. He is also the founder of Hamas’ military wing there, and he is in direct contact with the leaders of the West Bank and its cadres, which may prompt Israel to put him under the security radar. I believe that if the opportunity arises, Israel won’t hesitate to assassinate him, for he is a legitimate target to it.”

Arouri’s election represents a step in what could be described as the progressive replacement of the movement’s former political and military leadership. In the past, the head of Hamas’ political bureau, his deputies and department officers were mostly based abroad. This year's elections have resulted in powerful positions going to local leaders, in particular military personnel, which may result in a change in Hamas’ policy in the coming period.