What to expect from Hamas' newly elected leader

Several challenges await Ismail Haniyeh as he steps in as Hamas’ new leader, most importantly reconciliation with Fatah and fixing ties with regional players Egypt and Iran. 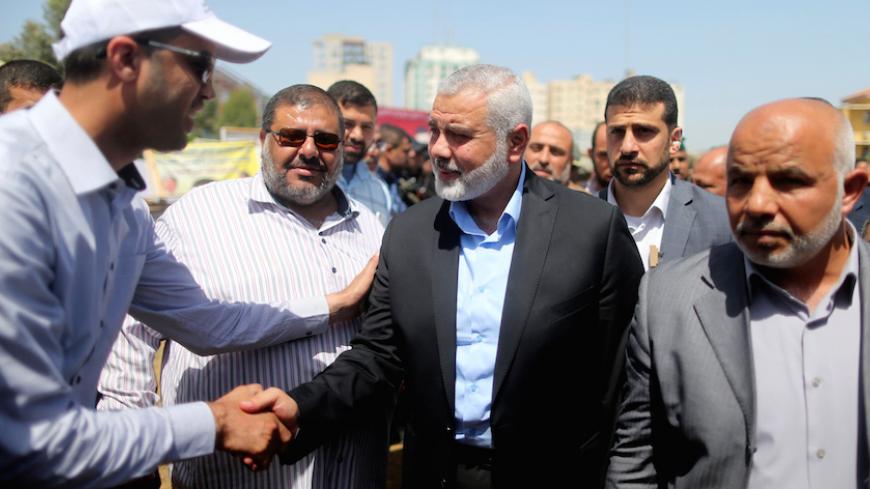 A senior Hamas official based in Qatar told Al-Monitor on condition of anonymity, “Hamas’ Shura Council, inside and outside of Palestine, organized a videoconference call on May 6 during which they elected Haniyeh, who was competing for the position with two other Hamas leaders — Mousa Abu Marzouk and Mohammed Nazzal — and the 18 members of Hamas’ new political bureau.”

He said, “A number of Hamas leaders were supposed to travel to Qatar, where Hamas’ political leadership is based, to participate in the elections, but Egypt's closure of the Rafah crossing prevented it. With the election of Haniyeh, Hamas’ internal elections were completed after four months and held in four different geographical areas: Gaza, the West Bank, the Israeli prisons and outside of Palestine.”

Hamas issued a statement on the evening of May 7, announcing the names of some of its political bureau members, such as Abu Marzouk, Nazzal, Yahya Sinwar, Saleh al-Arouri, Khalil al-Hayya, Maher Obeid, Izzat al-Rishq and Fathi Hammad. However, with no reason given, the names of the other members and the name of the deputy head were not made public.

Haniyeh’s election as the head of Hamas was expected, because he has been Meshaal’s deputy since 2013. He has led Hamas in the Gaza Strip and traveled to Egypt, Saudi Arabia and Qatar and met with a number of Hamas leaders during the last four months of 2016.

Haniyeh, who lives in Gaza, is widely popular among the Palestinians. In March, a survey by the Palestinian Center for Policy and Survey Research quantified Haniyeh's popularity and predicted that in the event of Palestinian presidential elections, he would receive 47% of the votes.

Abdel Sattar Qassem, a political science professor at An-Najah National University in Nablus, told Al-Monitor, “Haniyeh has a number of traits that may be equal to or superior to Meshaal's, such as his ability to address the Palestinians and being geographically closer to them. However, what is most important in Haniyeh’s election is that he will bring the movement closer to Iran through efforts by senior Hamas leaders such as Mahmoud al-Zahar and Yahya Sinwar. Haniyeh will also revive rapprochement with Hezbollah and Syria and he will work on resolving the negativity that harmed Hamas’ relationship with these parties.”

Haniyeh's election was made possible by the support for him throughout the movement, including from members in Palestine and abroad, as well as among political and military leaders. Other Hamas leaders have disagreements with certain factions, and would have faced internal polarization that could hamper their ability to lead.

Yet a number of difficult challenges await Haniyeh, such as achieving reconciliation with Fatah, restoring Hamas' relations with countries in the region such as Egypt and Iran, easing the Israeli siege on the Gaza Strip and keeping the specter of war out of Gaza.

Palestinian analyst of Hamas affairs Hussam al-Dajani told Al-Monitor, “Haniyeh is most importantly required to remove Hamas from international terror lists. Haniyeh’s election followed the issuance of Hamas’ new policy document on May 1, which is considered the culmination of a new stage in developing Hamas’ network of local, regional and international relations. So it would be best for Haniyeh to reside in Gaza and not move abroad, and instead assign representatives of the movement abroad to manage foreign relations according to his directives and instructions.”

Abdullah Abdullah, a member of Fatah’s Revolutionary Council and the chairman of the political committee of the Palestinian Legislative Council, told Al-Monitor, “Fatah welcomes Haniyeh's victory, but what is more important for us is for him to achieve reconciliation with Fatah and to end the division. We want him to walk the walk, not only talk the talk. We hope to see this soon. We believe Meshaal will not stray far from the decision-making circles in Hamas in light of his extended experience in leading the movement.”

Ahmed Yousef, a former political adviser to Haniyeh, told Al-Monitor, “In the coming weeks, the Hamas leadership positions and duties will be distributed, the movement’s internal situation will be arranged, many regional and international relations will be restored, reform within Hamas will be achieved and the electoral process will be fixed, to prevent the repetition of mistakes that occurred during the recent electoral process weeks ago.”

Yousef added, “Hamas now needs to choose a secretary-general from its veteran leaders with the ability to manage the various conflicting currents, and since it has become a widespread movement, Meshaal or Abu Marzouk might be prime candidates to handle such a responsibility.”

As Meshaal steps down for Haniyeh to take over, Hamas turns a new page amid serious challenges and harsh threats that require a wiser and more cautious attitude from the new leadership.