Hamas held its internal leadership elections ahead of the Palestinian general elections to bring new blood into its organization. 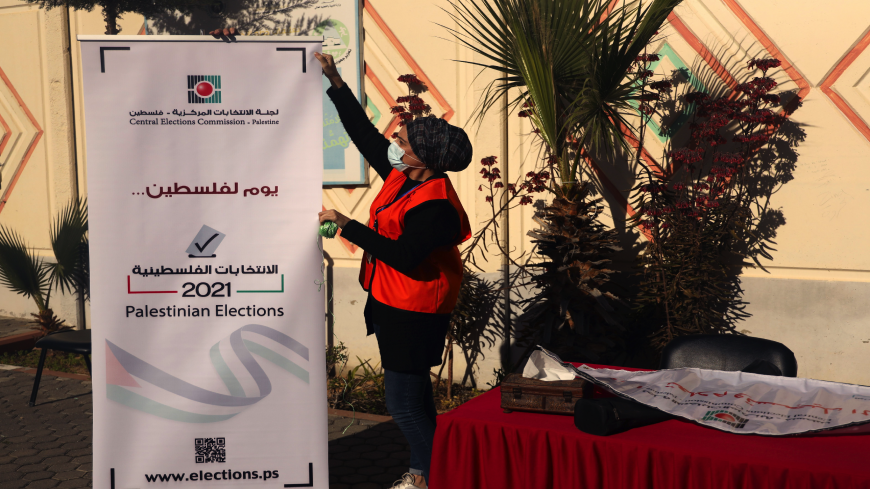 A Palestinian member of the Central Elections Commission sets up an information leaflet following the opening of the first Voter Information and Registration Center in Gaza City on Feb. 10, 2021. Rival Palestinian factions Fatah and Hamas said they had agreed on "mechanisms" for forthcoming elections and to respect their outcome, after years of bitter divisions. The parliamentary and presidential polls are set for May 22 and July 31, respectively. - MOHAMMED ABED/AFP via Getty Images

Hamas held its internal elections Feb. 19, during which tens of thousands of Hamas voters elected the administrative bodies for sub-regions, the General Shura Council, and the head and members of the movement’s political bureau, according to a Hamas statement on Feb. 23. The results have yet to be announced.

Hamas conducts its elections every four years in complete secrecy in the three separate regions where the movement is present, including the Gaza Strip, the West Bank and outside the Palestinian territories. The electoral process starts off with the election of the leadership of sub-regions, which vote for the Shura Council. The latter in turn elects members of the movement’s political bureau.

But this time, despite the secretive aspect of the elections, Hamas published pictures of the voting in different areas of the Gaza Strip.

Of note, Hamas members in Israeli prisons elected a leadership body on Dec. 10, 2020.

A Hamas source told Al-Monitor on condition of anonymity, “This year’s internal elections included for the first time the listing of names of those who have been in Hamas for 15 years so that they would be among those eligible to be elected. In previous years, only those with a sergeant rank were able to run, which is the highest rank within Hamas. The movement’s bylaws prevent self-nomination; the elections rather depend on voters spontaneously choosing names, and whoever ends up with the highest number of votes takes over leadership positions.”

Hamas spokesman Hazem Qassem told Al-Monitor, “Hamas’ internal elections are held periodically according to its own bylaws. The movement believes elections are the civilized way for members to choose their representatives. It is a serious and fair process that gives equal opportunities for everyone to participate. It is difficult to predict the results or names of those elected. Hamas’ internal elections come ahead of the Palestinian legislative elections in May. But this does not stop Hamas from participating in those elections.”

“The movement’s General Shura Council rejected in January a proposal submitted by some of the movement’s leaders to postpone the internal elections for another year in order to devote themselves to the legislative elections,” a Hamas leader told Al-Monitor on condition of anonymity.

The source added, “There were talks about reelecting Ismail Haniyeh as head of the movement and electing Khaled Meshaal to be in charge abroad, succeeding Maher Salah, while Saleh al-Arouri would remain the leader in the West Bank and Yahya Sinwar in Gaza — although some of the movement’s leaders are vying for his (Sinwar’s) position. But he has the support of Hamas’ military leadership.”

Another Hamas source told Al-Monitor, “There are several names on the lists for the leadership positions in Hamas. It seems Haniyeh has the most chances of remaining in his position as head of the movement. Meanwhile, the competition over the Hamas leadership abroad is clear, with signs that Meshaal will be the next head of Hamas abroad. Others who may accede to this position are Salah and Mousa Abu Marzouk.”

This source added, “Hamas leader in the West Bank, Arouri, does not have competitors given the security situation there in the presence of Israel. Competition is more prominent in Gaza. Although Sinwar has the biggest chances to remain head of the movement in the Strip, others emerge such as Khalil al-Hayya, Nizar Awadallah and Fathi Hamad.”

Wissam Afifa, the director of Al-Aqsa satellite channel in Gaza, told Al-Monitor, “Hamas decided to hold its internal elections despite the legislative elections being scheduled for May because it wanted to pump new blood into its bases and leadership and create a state of internal competition. It wants to show that it is not only an armed faction and demonstrate its internal democratic scene. Hamas wanted to tell the international community and the region that it is exercising its organizational democracy.”

Afifa added, “These internal elections are more competitive than previous ones. There are different currents and alliances, but they lack overt practice. Hamas keeps its leadership symbols in their positions, despite some fighting old-age, which opens the way for new young faces to be elected as members of the administrative bodies and Shura Councils, and even in the political bureau. The change rate is about 20% to 30%.”

The new Hamas leadership faces many challenges — namely, the recent regional developments in the aftermath of the Arab Spring; Hamas' decreasing influence in the region, especially in Syria; the pressure it is facing from some Arab countries; the military confrontations with Israel between 2008 and 2014; and the 2018 Marches of Return. All of this requires great effort to restore Hamas' relations in the region.

Basem Naim, a member of Hamas’ International Relations Office, told Al-Monitor, “Hamas held its internal elections with the participation of tens of thousands of its members in various regions, despite the great security risk involved. Despite the pursuit of Hamas by the Israeli occupation, the movement insisted on holding elections to maintain a transparent and impartial process within its organizational rules. These elections had an unprecedented rate of leadership change, and the average age of leaders is much younger than that of other Palestinian organizations.”

Naim added, “Hamas seized every opportunity to participate in the student, union and municipal elections, and its internal elections are a continuation of this democratic commitment.”

The internal elections represent an opportunity for Hamas’ new leadership to study regional changes and rearrange its position in the existing regional axes. Perhaps Hamas’ internal elections in the absence of the Donald Trump administration means more regional stability, which allows its new leadership to preserve its alliances, but it may have to pay political prices, especially if the new US administration gets closer to Iran and demands it reduce its support for Hamas.

Sari Orabi, a researcher on Islamic movements, told Al-Monitor, “The Hamas elections are not expected to result in fundamental changes in its leadership structure, except for Meshaal’s return abroad if he so desires — which will create a balance between the two strongmen in Hamas: Sinwar and Arouri. Hamas’ unity prevails in its internal elections, but alliances and influence still play a role.”

Orabi added, “Hamas’ internal elections in the West Bank were not easily conducted, for fear of being pursued by Israeli security. The movement has yet to find a solution to this dilemma. Elections were limited to its former prisoners and those residing abroad, which could cause many legitimacy issues for its leadership in the West Bank since not all bases could vote.”

On Jan. 29, Wasfi Kabha, former minister of prisoner affairs in the Hamas government, told Al Jazeera, “I am not pleased with the West Bank’s representation in Hamas’ last elections, because those who represent it are members residing abroad. In fact, those who leave should be counted as abroad votes, and only the people residing in the West Bank should represent it.”