Hamas has re-elected Khaled Meshaal to head the movement for a fourth term, writes Hazem Balousha. 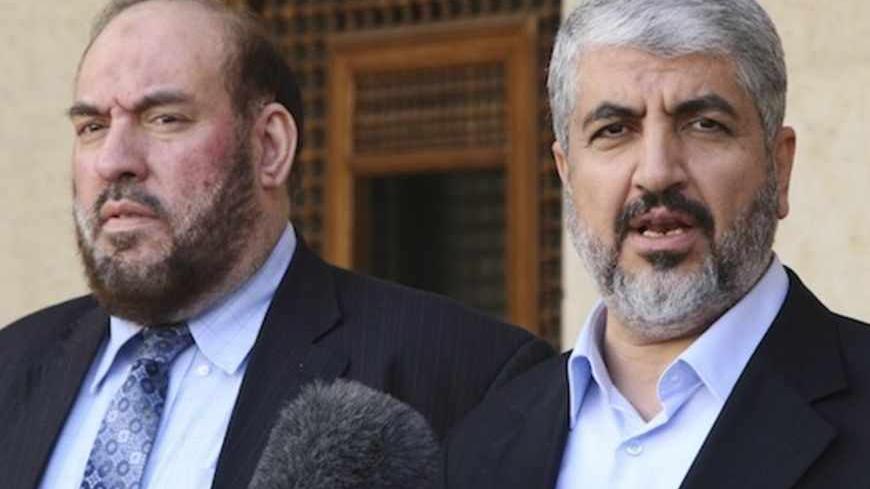 Hamas leader Khaled Meshaal (R) and Mohammad Nazzal, a member of the Hamas leadership, speak to media after their meeting with Jordan's King Abdullah at the Royal Palace in Amman, Jan. 28, 2013. - REUTERS/Majed Jaber

The Islamic Resistance Movement, Hamas, has re-elected Khaled Meshaal for a new term as the head of the group’s political bureau. The election occurred during a secret meeting of the Shura Council representatives in Cairo on Monday [April 1].

On Tuesday, Hamas announced in an official statement that Meshaal was re-elected for a new term in an atmosphere of “genuine democracy.”

In the statement, the Islamist group said that “after completing all electoral preparations abroad and at home, which were based on ‘genuine consensus and democracy,’ the Shura Council held its ordinary session in Cairo to elect the head and members of its political bureau.” The session was named after commander Ahmed Jabari, who was assassinated in November.

The statement added that “the meeting’s atmosphere was positive and fraternal. There has been a consensus among the members of the Shura Council with all its components in the West Bank, the Gaza Strip and abroad.”

Informed sources, speaking on the condition of anonymity, told Al-Monitor that the Shura Council meetings in Cairo were limited to electing the head of the group’s political bureau, as the members were elected about three months ago.

The sources added that the re-election of Meshaal as the head of the political bureau resulted from a deal between the various forces within the movement, after Meshaal expressed his intention not to run for a new term. The sources said that Meshaal insisted numerous times that he did not wish to run for a new term, but the movement’s leaders asked him to reconsider and re-elected him as head of Hamas’ political bureau for another four-year term.

Arab and Islamic countries — namely Egypt, Qatar and Turkey — have been pushing for the re-election of Meshaal in light of the political tension prevailing in the Arab region following the Arab Spring revolutions. These countries believe that Meshaal is a charismatic leader with a great deal of political savvy, which equips him to deal with the changes taking place in the regional political arena. According to the sources, these countries did not want to see a new leader with a new vision.

Hamas’ Shura Council is made up of three main political offices — one in the Gaza Strip, one in the West Bank and the third in exile. Each bureau includes 15 members, in addition to other representatives, some of whom are appointed by the international Muslim Brotherhood movement, bringing the total number of members to 55.

The sources added that during the meeting in Cairo, the Shura Council also elected Ismail Haniyeh, head of the movement in Gaza, as deputy head of the political bureau in Gaza and Moussa Abu Marzouk to be responsible for the movement’s exiled branch. Saleh al-Arouri, who lives abroad, was elected as deputy head in the West Bank. These leaders held the same positions during the previous term.

The Shura Council meeting in Cairo, which was inaugurated by the Muslim Brotherhood’s Supreme Guide, Mohamed Badie, was attended by only a few members, as usual, in addition to Hamas’ representatives in the West Bank, who were represented by released prisoners exiled to Qatar and Turkey.

Sources added that Hamas completed the by-elections of the Shura Council and the political bureau in the Gaza Strip in April, where Haniyeh won the highest number of votes. Meshaal, on the other hand, was elected earlier during the election of Hamas’ political bureau abroad. In the West Bank, the movement’s members were appointed without elections due to the difficult security conditions.

In 1997, Israel tried to assassinate Meshaal in Jordan, shortly after he was elected head of Hamas’ political bureau. The hope was to extend the term of Marzouk, who was arrested in the US and who is now Hamas’ current deputy head.

Pursuant to Hamas’ electoral law, the head of the political bureau can stay in office for a maximum of two terms. However, Hamas didn't counted Meshaal's first term, since he came to office to complete the remaining time of Marzouk’s mandate. Meshaal’s term officially started in 2000 and was recently renewed from the Egyptian capital for an unusual fourth term as a result of the exceptional conditions plaguing the region.

Meshaal is believed to be a charismatic leader, with a great deal of political savvy that could allow him to make a breakthrough in the world of politics. In addition, he maintains good personal relations with Arab and Islamic leaders, including Palestinian President Mahmoud Abbas.

In 2006, Hamas won a landslide majority in the Palestinian general elections and took control of the Gaza Strip in 2007. The movement has faced frequent military confrontations with Israel, most notably Operation Cast Lead and Pillar of Defense. All parties are now anticipating the changes that could occur in light of the tension and chaos gripping the region following the Arab revolutions and the rise of the Muslim Brotherhood movements to power in many countries. They hope that Meshaal will be able to achieve internal Palestinian reconciliation.

Hazem Balousha is a Palestinian journalist based in Gaza City.