After promising to not seek a third term, Hamas chief Khaled Meshaal has reversed his decision as a result of several factors, including regional changes relating to the Muslim Brotherhood’s ascension to power in major Arab countries, writes Omar Shaban. 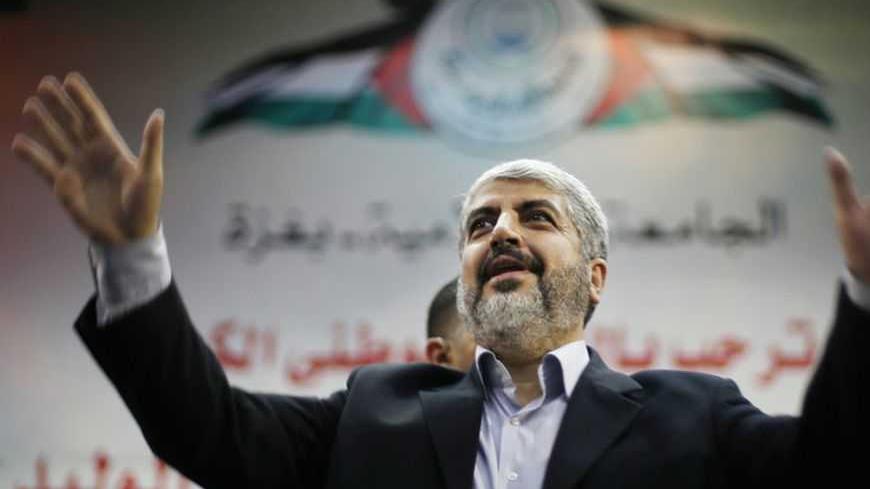 A different election from before

In early April 2012, Hamas held elections for its party structure from top to bottom. The elections started in Gaza, where — unlike in the other three areas: the West Bank, the Israeli jails and abroad — Hamas can freely move and communicate. Hamas’s leadership comes from these four areas. The Israeli occupation of the West Bank and the security measures against Hamas activists in jail hampered the elections in those areas. The elections abroad were delayed because, after Hamas left Damascus, the movement’s leaders became dispersed between Egypt, Jordan and the Gulf.

Israel’s war on Gaza last November caused an additional delay. But Hamas has demonstrated that it can work in more difficult conditions and it was able to complete the elections in six months. Only the post for the head of the political bureau remains to be filled, and that is expected to happen in the next few days. The delay was not for logistical reasons, as is the case in other areas. The delay was for more important reasons. It was because of political and strategic reasons having to do with where Hamas is heading in the new Middle East after the Arab Spring and its critical junctures.

The evidence suggests that Khaled Meshaal is the one most likely to win that post, which would be for the third time. That is an exceptional departure from Hamas’s rules, which set a maximum of two consecutive terms for the job. Hamas granting that exception to Meshaal adds special significance to the post and to the one who occupies it. It also points to the nature and challenges of the next stage, which requires Hamas to behave differently than in the past. In the past period, there has been a lot of speculation that the post may go to Meshaal’s deputy in the political bureau, Moussa Abu Marzouk, or the prime minister of the Hamas government in Gaza, Ismail Haniyeh. The delay in resolving that issue reflects the serious disagreements over it and the challenges that the Hamas movement faces in the next phase.

Several questions are raised: Why did Meshaal reverse his decision to not vie for the post, as he had repeatedly said? What were his conditions for agreeing to run a third time? What are the factors that necessitated Meshaal’s return to the presidency of the political bureau? What role, if any, did the regional powers play in the nominating process?

A new reality that requires a new approach

Since it was founded 25 years ago, Hamas strived to hold its elections on time despite its secretive working conditions. The core criteria for electoral success inside Hamas were organizational matters, military action and matters that boost the organization’s popularity within the Palestinian territories. But the recent elections, which began in April 2012 and are expected to be completed soon, have focused on issues that are more important than structural or military matters; they are political issues. The strategic changes can be summarized as follows:

1. The Arab Spring, which has brought fundamental geopolitical changes to the Middle East, especially with regard to the balance of power between the two main camps: The resistance (mumana’a) camp, which includes Syria, Iran and Hezbollah; and the moderate camp, which includes Egypt, Saudi Arabia, Turkey, Jordan and Qatar.

2. The Islamist surge, in the form of the Muslim Brotherhood reaching power in Arab countries, notably Egypt and Tunisia. That was an important break in the Arab boycott that Hamas was facing.

3. The repositioning of the movement after it left Damascus, which hosted Hamas’s leadership and provided the movement with ample freedom of movement and an appropriate setting for its political and revolutionary discourse.

5. The lax Western attitude toward opening direct and indirect dialogue channels with Hamas.

Hamas’s attempt to move away from the Syria/Iran axis and its search for new allies leave it with no choice but to radically change its policies to become more in line with the new Middle East.

The balance of power within Hamas

Even though Hamas tries hard to deny any internal conflict, as any organization does, it was unable to hide it during the elections. The reconciliation with the Palestinian Authority was one of the issues over which a dispute erupted. The reconciliation process passed through many stages and was assisted by mostly Egyptian efforts. It ended with the Doha Agreement in February 2012 when Meshaal agreed to Abbas' becoming the head of a technocratic government, after reaching a deadlock in selecting an independent person for that post. That issue had delayed reaching a final agreement for a long time. That agreement was met with widespread opposition inside Hamas for two reasons. First, Abbas is not an independent person. He is the head of the PA and the head of Fatah. Second, Meshaal had not consulted Hamas’s institutions before taking that decision.

Because of that, Hamas’s leaders in Gaza made public statements that criticized, sometimes harshly, Meshaal’s decision. That made him feel that he had no mandate to lead the movement. So he declared several times that he was no longer interested in running for the political bureau for the third time. That opened the door for alternative candidates, especially Abu Marzouk, who is Meshaal’s current deputy and Hamas’s first president for two consecutive terms in the mid-1990s, and Haniyeh, the prime minister of the Hamas government in Gaza and who began to seriously consider vying for the post after Meshaal declared that he will not run and Hamas’ landslide victory in the election in Gaza. It should be noted that Haniyeh modified his government at the beginning of September, when he appointed a vice president with full authority but retained the foreign ministry. Observers interpreted the move as confirmation of Haniyeh’s desire to run for the presidency of the political bureau. Despite Haniyeh’s remarkable popularity inside Hamas, especially in Gaza, being president of Hamas’ political bureau requires him to be present outside of Gaza as well as to have extensive experience in Arab and international politics, things that Haniyeh lacks.

Leading Hamas is not a private affair

Hamas' winning the 2006 legislative elections, its ruling of the Gaza Strip ever since, the Israeli blockade, and the two Israeli wars on Gaza in 2008 and 2012 have made of Hamas an international movement with widespread support and great influence in regional politics.

So the question of the presidency of Hamas’s political bureau is not only an internal issue but also an issue of interest to regional powers, be they hostile to Hamas such as Europe and America, or friendly to it such as Turkey, Egypt — especially with Islamist parties ruling those two countries — and Qatar, which is striving to become a critical state in the Middle East. Qatar received Meshaal after he left Damascus.

There is information that the head of the guidance office in Egypt asked Meshaal to stop saying that he does not intend to run a third time for the presidency of the political bureau. Also, the Egyptian president assured Meshaal that him taking that post is in the interest of Egyptian national security. Moreover, the historic trip to Gaza by the Emir of Qatar in September 2012 was aimed at persuading Haniyeh to not compete for the job and to remain prime minister in Gaza. In return, Qatar promised to pump a large amount of money, nearly $450 million, to enable Haniyeh’s government to serve Gaza’s residents. Also, Meshaal’s historic visit to Gaza last December was aimed at solidifying his popularity in Gaza and showing that he is not only the leader of Hamas abroad, but that he also enjoys the support of Hamas in Gaza, which is critical for Hamas decision-making.

What does electing Meshaal mean?

There is no doubt that re-electing Meshaal as head of the political bureau will have very significant repercussions, including:

— Palestinian reconciliation. There is information that the reconciliation, which has not yet happened between Hamas and Fatah, did happen between Meshaal and Palestinian Authority President Abbas. That was reflected by the harmony and courtship between the two leaders and confirms that Meshaal will push more strongly for reconciliation.

— Peace in the Middle East. On various occasions, including in an interview with CNN last November, Meshaal said that he accepts the two-state solution. During his historic visit to Gaza last December, he said that negotiating with Israel is not haram (forbidden) in principle. He seemed to be saying that nothing prevents Hamas from negotiating with Israel.

— Integrating into the new political order. With the entry of Islamists into the politics from the wide door — with the Muslim Brotherhood ruling Egypt and Tunisia — Hamas cannot remain outside the flock. Meshaal spent most his life abroad and did not live through siege and occupation. Thus, he was able to significantly interact with international politics and understand its complexity and details. He realizes that Hamas’s survival and influence requires great flexibility in dealing with international and regional politics.

Omar Shaban is the founder and director of Pal-Think for Strategic Studies, Gaza, Palestine. Born in Gaza in 1962, he holds a Master’s degree in Entrepreneurial Studies from the University of Stirling in Scotland in 1995. Omar participates occasionally in conferences on political and economic issues of the Middle East and the Euro-Med cooperation. Omar is an independent researcher and analyst specialising in Palestinian affairs.