Meshaal May Face Resistance In His Move Toward Openness

Khaled Meshaal has been re-elected as Hamas’ leader, but as he tries to move toward more openness, he may face resistance from hard-liners inside the movement, writes Adnan Abu Amer. 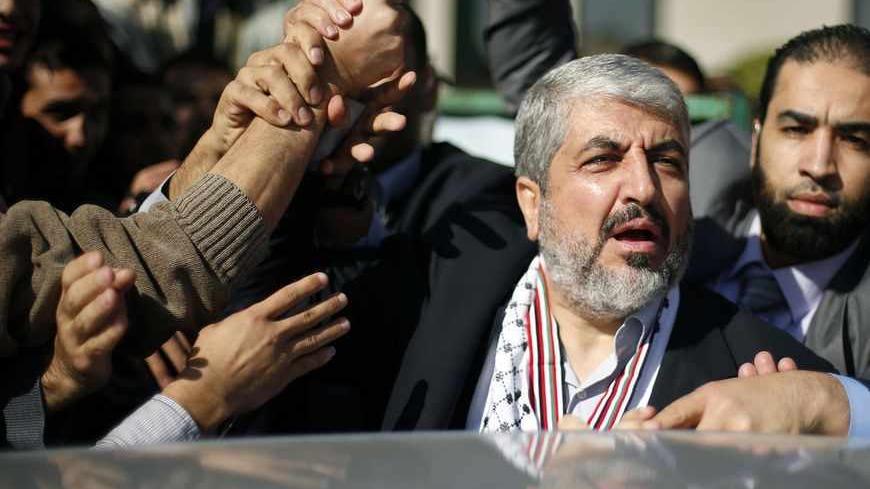 Palestinian students hold the hand of Hamas chief Khaled Meshaal (second from right) during his visit to the Islamic University in Gaza City, Dec. 9, 2012. - REUTERS/Suhaib Salem

With his re-election to another four-year term, Khaled Meshaal completes 17 years as the Hamas movement’s leader. He became chairman of Hamas’ political bureau in 1996, before reaching 40. He was then a young man overwhelmed by the decision-makers in the region and most Hamas members. Today he is 55 and seeks to reach the status of Sheikh Ahmed Yassin, the movement’s founder. He constantly has meetings and holds interviews with local, regional and international decision-makers.

The above introduction may provide clues about the agenda Abu al-Walid — as he likes to be called — in his new term and the internal and external challenges that he will be facing.

Meshaal knows more than others that his re-election did not happen without reservations from some Hamas leaders, especially the high-ranking ones who were competing for the post, such as Moussa Abu Marzouk, 62, who lives abroad. For the past 16 years, Abu Marzouk has sought to restore what he saw as his “rightful place” as the movement’s leader because Meshaal reached that post only after Marzouk was arrested in the United States in 1996.

Also, Meshaal’s rival in the interior, Ismail Haniyeh, 50, sees himself worthy of being Hamas’ leader if Meshaal steps down because Haniyeh heads the government in Gaza and can attract large segments of Hamas members and leaders at home and abroad by means of his personable nature, which many envy.

Besides those two, who became Meshaal’s vice presidents in the new organizational structure, there is Mahmoud al-Zahar, who is considered Meshaal’s fiercest rival and will likely be left outside of the current organizational structure. He was against renewing Meshaal’s term because he said it violated Hamas’ rules of procedure and because there are other heavy caliber Hamas leaders, among them Zahar, who are qualified to take over Meshaal’s post.

Those three conceded Meshaal’s victory, but Zahar firmly believes, as he told me when I asked him about his future plans, that his priority is to address the negative reactions to Meshaal’s reelection because some feel that a “mistake” happened in the election. To accomplish that, he is relying on his persuasive capabilities, even though there is no guarantee that he will succeed.

Although renewing Meshaal’s term is something internal to Hamas, many were surprised by the congratulations and blessings that he received. The congratulations were expected from Hamas members and certain sister Islamic movements in the Arab countries, such as the Muslim Brotherhood, but not from Hamas’ opponents and competitors on the Palestinian scene.

Fatah, which is headed by Palestinian President Mahmoud Abbas, immediately congratulated Meshaal. Fatah and other Palestinian organizations said that Meshaal’s reelection will give the reconciliation the “oxygen” that it needs. Meshaal signed with Abbas the Doha and Cairo agreements, which were strongly opposed by many inside Hamas. Their internal criticisms came out into the open, something which has never happened with Hamas in its 25-year history.

This time, Meshaal is leading the movement. He knows that many Palestinians and Arabs want him to enthusiastically reconcile with Fatah. Meshaal does not hide his desire to reconcile even if it means making concessions on the ground, something that many Hamas leaders, especially those in the military, are not in a rush to voluntarily give to Abbas!

The leaders of the countries that Meshaal visited — Egypt, Turkey, Qatar, Jordan and Saudi Arabia — insist that he should end the Palestinian division. He feels embarrassed when he meets them without having accomplished that. But Hamas’ internal leadership does not feel similarly embarrassed because many Hamas leaders think that the reconciliation could bring Hamas more losses than gains.

The decision-making within Hamas is divided into the West Bank, the Gaza Strip, those based abroad, and the Israeli prisons. Meshaal hails from Ramallah and is thus trusted by the West Bank’s Hamas leadership, which is being hounded by both the Palestinian Authority (PA) and Israel, and is looking forward to the reconciliation to get some relief.

Meshaal knows that they are suffering, but the leadership in Gaza, which continuously declares its solidarity with its brothers in the West Bank, does not seem convinced by Meshaal’s claims that reconciliation will restore the spirit of the “exhausted organization.” Lately, Meshaal has been making statements about “reconciliation, partnership and recognition of the other,” which he intends to achieve in his new term.

The 26 years that passed since Hamas was founded are enough to cause an intellectual leap in the movement’s political agenda. That has prompted the decision-makers in the region to pressure Meshaal to stay on as Hamas leader. Among them are Turkish Prime Minister Recep Tayyip Erdogan, Egyptian President Mohammed Morsi, Qatar’s Emir Sheikh Hamad bin Khalifa Al Thani, the Muslim Brotherhood’s Supreme Guide Mohamed Badie, King Abdullah II of Jordan, and PA President Abbas.

The above figures are not “in love” with Meshaal, but they do not hide the fact that they feel more “at ease” with him than with other Hamas leaders. They think that he is the one who can move Hamas from a military organization to one that practices politics and popular resistance, and perhaps even make Hamas join the political process with Israel, at least indirectly.

However, Meshaal will not make free concessions to those parties. He has the intelligence and the foresight that his rivals within the movement lack. He is traveling everywhere and being received by many. He has learned how international politics operates. He knows about diplomatic deals and pragmatism. He is confident that, with his new political team, he can remove Hamas from the EU and US terror lists and make the world recognize the movement as a legitimate political force.

Although most Hamas leaders agree with those goals, they disagree on the “political price” that Hamas has to pay to achieve them. This puts Meshaal in front of a big obstacle, given the appointment of two military commanders to the new political bureau: Yehya al-Sinwar and Rouhi Moushtaha. Those two established Hamas’ military wing in 1986. Israel released them as part of the October 2011 prisoner exchange deal and they are promoting the idea within Hamas that Israel will not last for more than two decades at the most!

Meshaal does not consider these dangerous beliefs acceptable in realpolitik as he strives to move Hamas into a new era of political openness toward the international community. He hopes he can accomplish that by “taming” Hamas’ military men who reject any political process with Israel, be it direct or indirect, on the grounds that they can eliminate Israel from the map with one or two additional military rounds!

Moreover, if Meshaal tries to rehabilitate Hamas intellectually and politically, it may displease “yesterday’s allies,” specifically Iran, which has desperately tried to keep the line of communication with the movement open even though Meshaal has redrawn the movements alliances and turned his back to Iran.

Many inside Hamas, and they are led by Zahar and the military, disapproved of Meshaal turning his back to Iran. They think that moving away from Tehran is a “magic formula” for the financial and military decline of movement, which is forcing Meshaal to try to find alternative sources of funding and arms.

Finally, whoever gets the chance to talk with Meshaal these days will sense the heavy burden the man is carrying. His administrative and political duties are beyond the capabilities of one leader, regardless of his talents. Therefore, we do not expect a “miracle” inside Hamas despite Meshaal’s efforts. Change inside Hamas will not happen at the “push of a button!”

Adnan Abu Amer is dean of the Faculty of Arts and head of the Press and Information Section, as well as a lecturer in the history of the Palestinian issue, national security, political science and Islamic civilization at Al Ummah University Open Education.