Shlomi Eldar has learned that Mahmoud al-Zahar, a rival of Khaled Meshaal, has been removed from the Hamas political bureau. 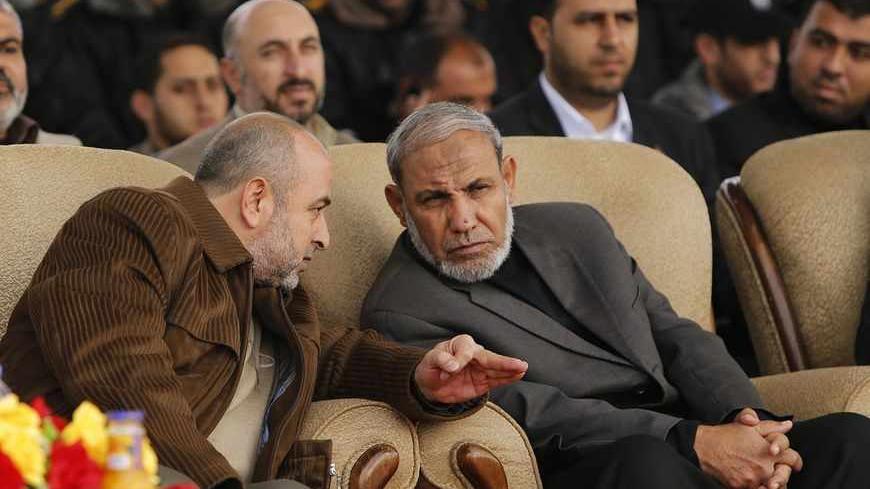 In the wake of this week's re-election as head of Hamas' political bureau of Khaled Meshaal to a fourth term comes the news that Mahmoud al-Zahar, the movement's strongman in Gaza, has been left out, Al-Monitor has learned. That means he has not been elected to be part  of the political bureau.

Championing Hamas' hard-line policy, al-Zahar was vehemently opposed to the reconciliation talks with the Fatah movement espoused by Meshaal. He also set out against Meshaal's stance that Hamas had to move from an armed struggle against Israel to an unarmed popular uprising.

In September 2003, al-Zahar survived an Israeli assassination attempt. The Israeli air force fired two missiles at his home in the Rimal neighborhood of Gaza. Al-Zahar emerged unscathed, but his son, Khaled, who was to be married that day, was killed. In Januray 2008, al-Zahar lost his second son, Hussam, a member of Izz ad-Din al-Qassam Brigades in an engagement with an IDF force in Gaza.

Al-Zahar was also a leading figure in the negotiations following the kidnapping of the Israeli soldier Gilad Shalit and the release of Palestinian prisoners. He fostered close ties with the German mediator Gerhard Conrad.

In 2006, al-Zahar ran Hamas' campaign for the Palestinian Authority, coining the name of the slate that was competing on behalf of the movement — "The Change and Reform Party." Many believe that his activity secured the historic victory that brought Hamas to power.

But then came the moment when al-Zahar forged a combative opposition to Meshaal's leadership that almost prompted him to step down. With al-Zahar having not been elected to be a member of the bureau that sets Hamas policy and having been de facto removed from its institutions and leadership, it is now clear who of the two has had the upper hand.

Another surprise that comes out of these elections is the relegation to third place of the deputy chairman of the political bureau, Moussa Abu Marzouk. He has been pushed aside while Ismail Haniyeh, the prime minister, was voted into second place. Incidentally, according to one of the reports, it was a tight race between Haniyeh and Meshaal. It still remains unclear whether Haniyeh will be deputy head of the political bureau and Meshaal's deputy, or whether he will make do with the premiership and concede the vice-chairmanship to Marzouk.

Either way, two significant facts emerge from the election results and the makeup of Hamas' new political bureau:

• The first is that Meshaal, who only a year ago said he was "weary," succeeded in ousting his opposition from the political bureau and strengthening the exiled external Hamas, whose leaders had fled Damascus. He was able to do that at the expense of the Gaza leadership which in the past had greater impact on the decision-making process.

• The second is that the movement's activists endorsed the champions of pragmatism, while pushing aside the hard-liners who were opposed to reconciliation with Fatah and a new popular struggle instead of an armed one.

It can therefore be said that Meshaal received a clear mandate to solidify Hamas as a political movement that seeks international recognition. The road is still fraught with obstacles. That being the case, there is one fact that can nonetheless be highlighted: Hamas is no longer the movement that encouraged and even initiated suicide bombings and the killing of civilians. Rather, this is a movement that has come to the realization that terror will bring it nothing but doom. This is what Meshaal understood already five years ago. What is interesting is that even the members of the Majlis al-Shura [Shura Council], who appoint the political bureau, have also come to that realization.

And that's only the start.