Mahmoud al-Zahar is planning his comeback in the Hamas leadership, with the backing of Tehran and the Hamas armed wing Izz ad-Din al-Qassam Brigades. 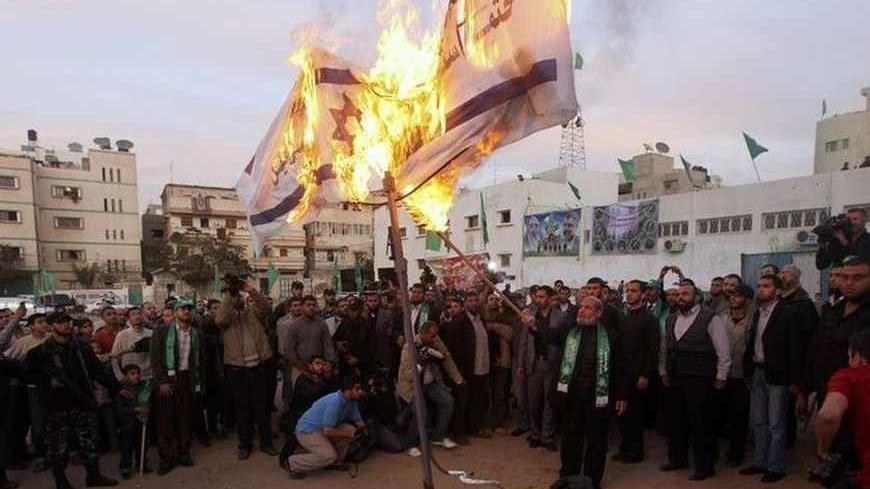 Mahmoud al-Zahar was forced off the Hamas Shura Council, which administers the organization, in April 2013. In recent elections for the council, which ended on March 2013, Khaled Meshaal, the head of the movement’s political bureau, did everything he could to be elected for a third term, but he also invested the same effort to ensure that Zahar, his rival from Gaza, would be left out.

Zahar launched a vehement attack against Meshaal last year for adopting what he described as a conciliatory policy, without first consulting with the Hamas leadership. The two issues that set off Zahar were Meshaal’s decision, made with the support of the departing Emir of Qatar Sheikh Hamad bin Khalifa Al Thani, to reconcile with Fatah and form a national unity government, and, even more troubling as far as Zahar was concerned, Meshaal’s declaration that Hamas would abandon the armed struggle (jihad) in favor of a nonviolent popular uprising.

For the first time in Hamas’ history, Zahar hung the movement’s dirty laundry out to dry where everyone could see it, and attacked Meshaal’s independent decisions, made without consulting with the Shura Council. At first, Zahar’s opposition led Meshaal to announce his resignation from the movement’s leadership, but he later withdrew his resignation and decided to wage battle against his opponents and the person who headed them.

Zahar has a significant power base among the hard-core members of Hamas in the Gaza Strip, consisting of activists and rank supporters who have followed him for years. They followed him blindly not only because of his status and the political power he had accumulated over the years as one of the Hamas members exiled to Lebanon, and as the movement’s legendary spokesperson. But they also followed him because he paid a steep personal price in the armed struggle against Israel, which he supported so fervently. Zahar lost two of his sons, both prominent members of the movement’s military wing, to that struggle.

His eldest son, Khaled, was killed on his wedding day by a missile fired at Zahar’s home in September 2003 during an Israeli assassination attempt. His second son, Hussam, was killed five years later, on Jan. 15, 2008, during an encounter with Israeli forces in the Sejaya neighborhood of Gaza. Zahar’s supporters and admirers never reconciled with the idea that a leader of the movement who sacrificed two of his sons would be so humiliated by “that gang of bootlickers,” the derisive term they use to describe Meshaal’s confidantes and supporters.

It turns out that even in a movement whose leaders attempt to conceal their disagreements and give a false impression of unity, ardent political struggles are an inseparable part of the game. Zahar was humiliated when he was left out, but he waited on the sidelines, ready to spring as soon as the leader who orchestrated his removal, and anyone who participated in it for that matter, afforded him an opportunity. That opportunity came sooner than he expected. Over the past few months, all the traditional allies that Hamas depended on disappeared, one after the other, while Meshaal and the other leaders of the movement watched in stunned silence.

The relationship with Iran reached an unprecedented low point because of the events in Syria. Then Meshaal’s patron, the Emir of Qatar Sheikh Hamad bin Khalifa Al Thani, abdicated, leaving the throne to his inexperienced son. And if that was not enough, the rising star of the Muslim Brotherhood, which offered enormous hope to its subsidiary in the Gaza Strip, crashed and burned much sooner than expected when Mohammed Morsi was deposed as president of Egypt. Even Zahar himself could not imagine that things would turn out as they did. His supporters are quite happy citing that popular Arabic expression, "Kal kalb biji yumu" (Every dog has his day). When they watch how Zahar is becoming more and more powerful by the day, they are convinced that God himself is intervening.

Al-Monitor has learned that while Hamas’ traditional sources of funding are drying up, Zahar alone has managed to raise large sums of money from Tehran. Zahar took care to maintain his ties with Iran after he was deposed, even though the leaders of his movement got into a bitter public feud with the Iranians.

With the money that he was able to raise, Zahar established a camp of supporters who are gradually emerging as a significant opposition to the faction that deposed him from the movement’s supreme leadership council. While Meshaal and the other heads of the Hamas political bureau, Hamas Prime Minister in Gaza Ismail Haniyeh and deputy head of Hamas political bureau Mousa Abu Marzouk, are banging their heads against the wall, trying to find money to fund the movement’s activities and offer financial support to the people of the Gaza Strip, the deposed doctor is building up his stature, especially among the Izz ad-Din al-Qassam Brigades, the military wing of the movement. Al-Monitor has learned from reliable sources that the relationship between Zahar and the head of the military wing, Marwan Issa, has become very close recently.

When Ahmad al-Jabari, who was considered close to Meshaal, served as head of the Izz ad-Din al-Qassam Brigades, relations between the military wing and Zahar were severed. Though Jabari was assassinated by Israel in the military action on Nov. 14, 2012 that launched Operation “Pillar of Cloud,” the improvement in Zahar’s relationship with the military wing cannot be attributed solely to a personnel change. It also has to do with a dramatic change in circumstances. The relationship between Zahar and Issa is important now for both of them. Issa is very concerned about the dearth of resources and guns, and believes that Zahar could be a possible solution to that crisis. Zahar knows that the Izz ad-Din al-Qassam Brigades could well be the ladder he needs to climb back to his former position in the senior leadership of Hamas.