Hamas won't give up military wing despite agreement

Fatah and Hamas have deferred discussion on the fate of the Izz ad-Din al-Qassam Brigades. 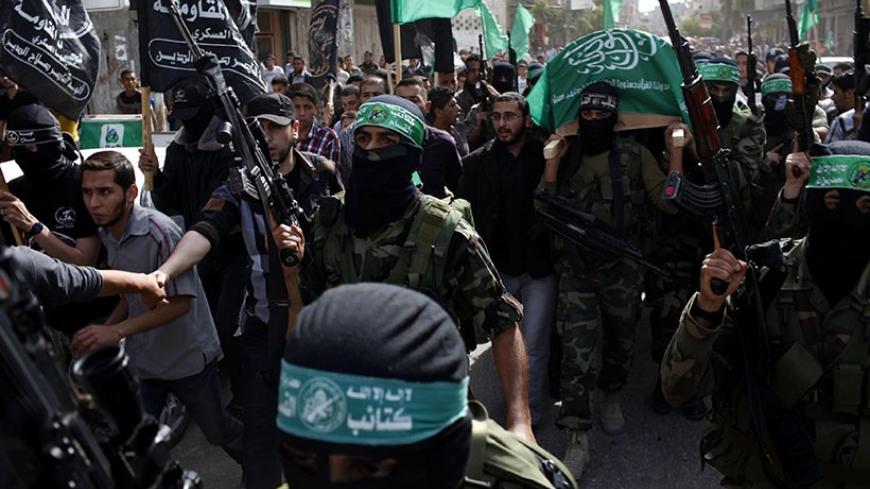 The April 23 reconciliation agreement signed by Palestinian leaders did not address the most contentious issue between them: the weapons of the Izz ad-Din al-Qassam Brigades, Hamas’ military wing. Both Fatah and Hamas thought it best to pass on the issue to avoid it posing an obstacle to reconciliation.

One factor complicating matters, Al-Monitor learned from the Ministry of Finance in the Gaza Strip, is that some 25,000 employees in the Hamas government work in the security services, and most of them belong to the Qassam Brigades. According to one Qassam military official, after the formation of the next government, these employees will take orders from the brigade's military leadership, not their current manager at the Ministry of Interior.

On April 29, the Foreign Ministry of the Hamas government released a statement in which it noted, “One of the challenges facing the success of the reconciliation is that President Mahmoud Abbas had announced that a government means that [all weapons should be under a unified command] and that Hamas should lay down its arms.” The statement went on to say that asking Hamas to hand over its weapons is a taboo.

Thus, it appears, Hamas and Fatah agreeing to postpone discussion of the Qassam Brigades’ weapons did not preclude Hamas’ further examining this sensitive subject in recent days. Hamas fears that the brigade's weapons will be considered illegitimate after the next government is formed because Abbas continues to stress that any weapons beyond state control are illegitimate, no matter what they are called, in reference to the Qassam Brigades. This prompted Hamas leader Mahmoud al-Zahar to assert on April 29 that reconciliation will not lead to the subordination of Qassam fighters to Abbas.

Al-Monitor met with one senior Hamas figure who took part in the reconciliation negotiations. When asked about the future of the Qassam Brigades, he said, “Dissolving the Qassam Brigades is out of the question, and those asking for that are dreaming. The reconciliation will not be at the expense of the military wings of the resistance, which represents the national army of the state of Palestine. Whoever [talks about disarming Qassam] is outside the national context, because handing over Qassam weapons is impossible and nondebatable.”

A Fatah leader close to Abbas told Al-Monitor, “Some are quietly talking about dissolving all the militias operating in Gaza, including the Qassam Brigades, and having only the National Security Forces as an army for all Palestinians. This would be similar to the situation in the West Bank, and only the security forces affiliated with the [government] could carry weapons.”

This same leader complained that Hamas is refusing to talk about the matter. He asserted, “[Hamas] insists on keeping the Qassam Brigades as a military force. It has declared on more than one occasion that it rejects any attempt to dissolve the group or integrate it within the PA [Palestinian Authority] security services. Qassam Brigades spokesman Abu Ubaida said that whoever thinks of eliminating the Qassam Brigades will himself be eliminated from the pages of history.”

According to Fatah, in the preparations for the reconciliation that began late February, “Hamas approved that the Qassam Brigades be completely separate from political issues, that [the Qassam Brigades'] leadership be in the new government and that the armed wing remain committed to the truce with Israel, according to the president’s policy.”

A Hamas leader who spoke on condition of anonymity dismissed all talk of dissolving the brigades. He told Al-Monitor, “This talk doesn’t deserve a response. The Qassam Brigades were created before the PA was established and has its own independent policy in dealing with Israel, away from any tutelage by anyone, including the next government.”

Al-Monitor toured a number of sites in Gaza where the brigades conduct military maneuvers and exercises around the clock. Most such locations are on al-muharrarat, or “liberated,” land, which to be precise consists of Israeli settlement sites abandoned in 2005.

A Qassam Brigades member near a military outpost south of Khan Yunis told Al-Monitor, “Becoming part of the PA security apparatus is not under consideration because [the brigade's] primary function is to defend the Palestinian people. The weapons of the resistance are legitimate, and no one can touch them, even if under the matter of reconciliation. We, the Qassam Brigades, trust the decisions of the Hamas political leadership, but that does not negate the fact that the PA's getting near Qassam’s weapons after the reconciliation will sabotage the reconciliation efforts.”

Following the signing of the reconciliation agreement, intensive talks were held within Hamas' ranks. The group's leaders held lengthy meetings with the movement's organizational base to promote the agreement. The aim was to convince them on the matter, because some had expressed doubts about its potential success, while others rejected the agreement out of concern that it might be implemented at the expense of Qassam's weapons.

Al-Monitor received confidential information that the Qassam Brigades would have the final say in enforcing the reconciliation agreement in the coming days, especially the file related to security and weapons in Gaza. Some circles expect that this particular file will be controlled by the brigades at the expense of the political leadership. The former will be more radical in preserving the peace and will not go easy on Fatah.

Al-Monitor also learned that the Qassam Brigades, which are represented by Marwan Issa in Hamas' political bureau, had “vetoed any progress in the reconciliation if it includes compromising [Qassam] weapons, in light of its harsh experience with rule in the 1990s, when Qassam was stripped of its weapons and saw hundreds of its members arrested. Qassam will not allow a reconciliation that sacrifices [its] weapons.”

When asked about the possibility of imitating the Hezbollah model in Lebanon, where Hezbollah maintains weapons alongside those of the army, one Qassam leader said, “The interlocutors in the reconciliation can search for any formula that maintains what has been agreed upon as long as they don’t mention disarming [Qassam] or integrating it into the security services. Otherwise, the reconciliation will not be successful. And there is a consensus within Hamas about this matter.”

The Hamas leadership is deploying efforts to reassure its military wing about its weapons, stressing that they will neither be removed nor integrated into the Palestinian national security apparatus. In fact, there is political and military unanimity within Hamas that preserving these weapons is a top priority, but does not mean a rejection of the reconciliation agreement. The reality appears to remain, however, that if Hamas has to choose between its weapons and reconciliation, it will definitely go with the weapons.