Hamas sticks to its guns; Egypt could still surprise

The fate of Hamas’ Qassam Brigades could hold up the reconciliation agreement between Fatah and Hamas; Bassem Sabry’s last article for Al-Monitor anticipates surprises still to come in Egypt. 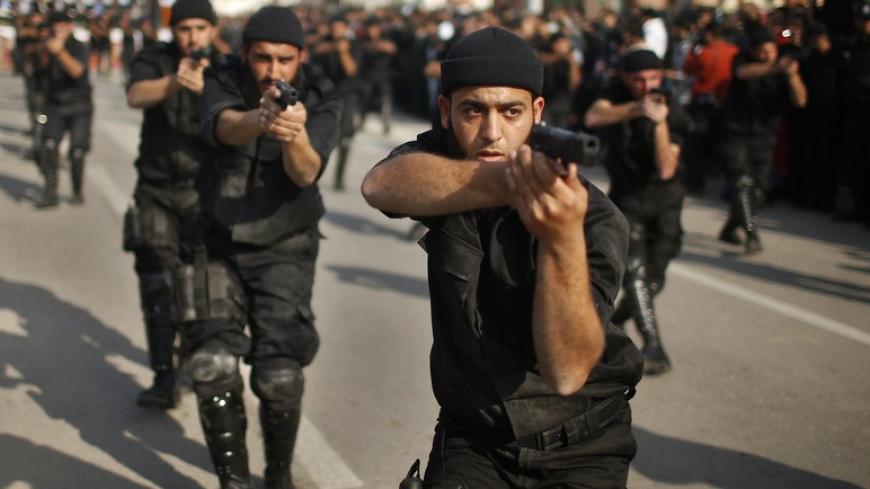 Members of the Palestinian security forces loyal to Hamas movement take part in a parade marking the fifth anniversary of the three-week offensive Israel launched in 2008-2009, in Gaza City, Jan. 13, 2014.

Hamas sticks to its guns

Adnan Abu Amer reports this week that Hamas will reject placing the Izz ad-Din al-Qassam Brigades under a unified command.

The text of the April 23 reconciliation agreement with Fatah makes no reference to a unified security structure, and such conversations were deliberately deferred, as Abu Amer previously reported.

The reconciliation agreement does, however, call for the implementation of the 2011 Cairo agreement and Doha Declaration. The Cairo document stipulates that a “Higher Security Committee … will be formed by a decree of the Palestinian president and will consist of professional officers in consensus."

Abu Amer writes this week: "Hamas fears that the brigade's weapons will be considered illegitimate after the next government is formed because Abbas continues to stress that any weapons beyond state control are illegitimate, no matter what they are called, in reference to the Qassam Brigades. This prompted Hamas leader Mahmoud al-Zahar to assert on April 29 that reconciliation will not lead to the subordination of Qassam fighters to Abbas."

In response to a question about a possible "Lebanon model" for a Palestinian unity government, as proposed here last week by Daoud Kuttab, a Qassam brigade leader told Abu Amer: “The interlocutors in the reconciliation can search for any formula that maintains what has been agreed upon as long as they don’t mention disarming [Qassam] or integrating it into the security services. Otherwise, the reconciliation will not be successful. And there is a consensus within Hamas about this matter.”

Hazem Balousha adds further detail to the agreement, including the timing and process for elections; Palestinian Authority funding for judges and prosecutors whom Hamas cannot pay; changes to ministries to put in place a technocratic government; and a committee to study retirement.

Abu Amer concludes that "there is political and military unanimity within Hamas that preserving these weapons is a top priority, but does not mean a rejection of the reconciliation agreement. The reality appears to remain, however, that if Hamas has to choose between its weapons and reconciliation, it will definitely go with the weapons."

This week witnessed the tragic and untimely passing of Al-Monitor columnist Bassem Sabry.

The remembrances by Sabry’s Al-Monitor colleagues revealed how much he had influenced others, not just with his sterling analysis, but with his kindness and humanity.

In his last article for Al-Monitor, on April 26, Sabry surveyed a pre-election landscape in Egypt that on its face seems to foreshadow a landslide for Abdel Fattah al-Sisi, whose only opponent is Hamdeen Sabahi, who also ran for president in 2012.

Sabry’s article conveyed his unusual combination of rigorous analysis and belief in Egypt’s potential to do the "remarkable," even if a long shot.

According to Sabry, there are three possibilities, even if slim, for Egypt to surprise:

First, a commitment by Sisi and those around him to a reform program that will address Egypt’s deep governance challenges so that Sisi would not “be viewed as the face of regression to the past”;

Second, Sabahi could seize the limelight of his underdog candidacy to offer an aggressive and bold vision for Egypt and thereby “push the Sisi campaign to spar over policy and to take positions on what might otherwise be delicate subjects it may wish to avoid, including security reform and human rights”;

Third, a role for the anti-Mubarak secular and national parties “such as the Social Democratic Party, the Free Egyptians and the Wafd, [who] could (again) come up with a much publicized official charter of what they demand of the next president. Such a charter would include crucial reforms and decisions, including on the electoral and protest laws as well as on the status of the detainees awaiting trial and the turbulent conditions facing journalism in Egypt, and even on national governance issues such as health care that could at least help ensure better short-term conditions for the country.”

All that seems certain about Egypt’s future is its uncertainty, even if Sisi appears to have a lock on the presidency.

Shadi Rahimi reported that on April 29, the day after an Egyptian court ordered a ban on the activities of the April 6 movement, the group’s members took to the streets in Cairo in defiance.

The ban on April 6 came the same day a court in Minya sentenced a top Muslim Brotherhood leader and more than 680 others to death for the killing of a police officer, earning the rebuke of US Secretary of State John Kerry, who called the sentences “disturbing” at a press conference prior to his meeting in Washington with Egyptian Foreign Minister Nabil Fahmy.

Sen. Patrick Leahy, D-Vt., chairman of the Senate Appropriations Subcommittee on State, Foreign Operations and Related Programs, said in an April 29 speech on the Senate floor that he will hold up $650 million in aid to Egypt because he is "extremely disturbed by the Egyptian government’s flouting of human rights and appalling abuse of the justice system, which are fundamental to any democracy," as Julian Pecquet reported.

As reported by Barbara Slavin, Fahmy told a Washington audience that US-Egypt ties had "eroded" because of the suspension of aid after the ouster of Egyptian President Mohammed Morsi last year, and that "'global rebalancing' affords Egypt an opportunity to 'diversify its portfolio of strategic and economic relationships.'" Fahmy further said, "We will continue to maintain and indeed enhance our strategic relationship with the United States and Europe. However, we will also look elsewhere. Our emerging relationship with Russia is one that we will seek to nurture and leverage."

An Al-Monitor correspondent in Sinai, which has seen a spike in military operations against terrorists, reports how failed development projects there have contributed to anti-government feelings among residents.