Congress is skeptical of extending of Iran talks; Iran has a hand in Gaza; acrimony between Egypt and Hamas is hindering a cease-fire agreement; and the Islamic State using the Turkish Consulate in Mosul as its headquarters. 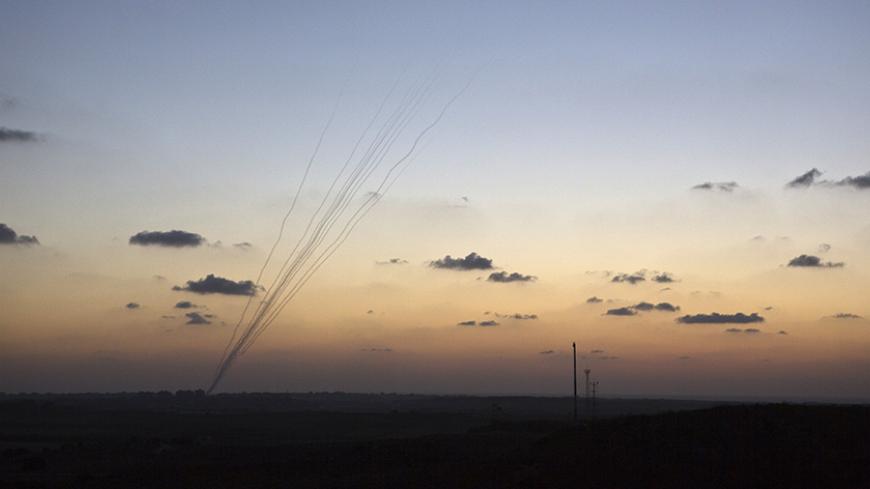 Smoke trails are seen as rockets are launched toward Israel from the northern Gaza Strip, July 13, 2014. - REUTERS/Nir Elias

Julian Pecquet reports that US Secretary of State John Kerry suggested to Jewish lawmakers that he might be willing to consider more sanctions on Iran if the talks fail. Although the State Department denied the report, other sources confirmed Pecquet’s account.

The P5+1 countries and Iran agreed to extend the nuclear talks until Nov. 24, adds Laura Rozen from Vienna.

“According to information acquired by Al-Monitor from sources in Tehran, Gaza and Beirut, a new strategy was adopted after the July/August 2006 war in Lebanon with respect to military support. The main goal was protecting the fighting groups from the danger of a military siege by making them capable of producing as many rockets as they need on the spot,” Hashem reports.

A senior Hamas official told Palestine Pulse’s Adnan Abu Amer, “Another motive that led [the Izz ad-Din] al-Qassam [Brigades] to start local production of rockets is the closure of tunnels by Egypt. This restricted the entry of raw materials needed for the manufacturing of rockets. However, despite the cut-off of the main source of supply of al-Qassam with rockets of multiple ranges from different origins, this did not prevent it from producing local rockets reaching targets deeper inside Israel.”

“The Iranians essentially smuggled in rockets via the brains of Palestinians, keeping rocket-making knowledge intact despite wars and attacks. It’s the same strategy the Iranians adopted in their nuclear program, under the philosophy that knowledge can’t be bombed,” Hashem adds.

On July 14, Iran’s Supreme Leader Ayatollah Ali Khamenei praised his country’s “appropriate stands” against the “Zionist regime” during the Gaza conflict. A confidential June report by the UN Security Council's Panel of Experts on Iran noted that an Iranian ship detained by the Israel Defense Forces on March 4 contained M-302 rockets and fuses, along with other arms.

As mentioned in this column last week, the war in Gaza could jeopardize the Palestinian unity government. Palestine Pulse’s Daoud Kuttab describes the helplessness of Palestinian President Mahmoud Abbas in the current conflict and, in a Washington Post op-ed, writes that Abbas’ legacy of peace building is a potential casualty of the Gaza war.

“Now is not the time to assess positions. We are facing fierce aggression by the Israeli occupation, and this requires uniting the efforts and the ranks to defend our people and to counter the aggression. Regardless of any differences within the Palestinian arena, the reconciliation will continue to be our choice and our position before, during and after the war. [Israeli Prime Minister Benjamin] Netanyahu has sought and is seeking to undermine the reconciliation, but our response will always be to stick to it more and more,” Meshaal said in the interview.

An anonymous Al-Monitor correspondent in the Sinai Peninsula reports that Israeli strikes on the smuggling tunnels in Gaza have caused damage to homes on the Egyptian side of the border, but have drawn little condemnation from Egyptian officials.

Meanwhile, Egyptian forces have stepped up security cooperation with Israel on the Sinai border at a time when Egypt Pulse’s Ayah Aman writes that the country has not ruled out importing natural gas from Israel.

An Egyptian security source told Al-Monitor’s anonymous correspondent that increased Egyptian security at the Gaza border “is to prevent terrorists from using smuggling tunnels or infiltrating to and from Gaza across the land border or in military boats in the Mediterranean Sea. Everyone knows the extent of the damage that was inflicted on Egypt through the tunnels and entry of terrorists from Gaza to tamper with the stability in the Sinai Peninsula.”

Egyptian hatred for Hamas, a group that was close to former President Mohammed Morsi, has provided some popular backing for these security measures and lessened sympathy for the plight of Gazans, according to Mohannad Sabry.

“The reaction of Egypt's current regime led by former defense minister and now-President Abdel Fattah al-Sisi to the ongoing war in Gaza — with the Egyptian news media and even a great portion of the Egyptian populace trailing along — has shown a new policy that is at the least apathetic and is at many times supporting Israel's military action, despite its continuing to take innocent Palestinian lives with impunity,” writes Sabry.

“A high ranking government source revealed to Al-Monitor that Cairo was quick to make its initiative public to head off other parties striving to replace Egypt in embracing the Palestinian cause. However, it exposed the decline of Egypt’s role in the region." Her source added, “The initiative was proposed after informing the Palestinian Authority and Israeli government of its content. However, it was not presented to Hamas for review.”

Following visits by Abbas and former British Prime Minister Tony Blair, the envoy of the International Quartet, Egypt made another bid to play a mediating role.

“Cairo, after refusing to directly negotiate with the leadership of Hamas, announced via its foreign minister in a press conference with Blair that it had initiated dialogue with Hamas to convince them of the need to accept the cease-fire proposal,” Hussein reports.

In his interview with Abu Amer, Meshaal did not rule out a role for Egypt if Cairo would acknowledge Palestinian demands.

“Egypt’s negative position toward Hamas is unwarranted. We didn’t interfere in Egyptian affairs, because they are internal affairs. And we respect the privacy [of those affairs] as [we respect the privacy] of other countries’ affairs. The responsibility of all Arabs, and the big sister Egypt first and foremost, is to stand by the Palestinian people, work to stop the savage Israeli aggression, end the siege on Gaza in a real way and help the people get rid of the occupation and the settlements," he said.

Amberin Zaman reveals that the Turkish Consulate building in Mosul, Iraq, where 49 Turkish citizens, including the consul general, are still captive, is now the headquarters of the Islamic State group (IS).

Mosul’s governor Atheel al-Nujaifi told Zaman that he did not expect the hostages to be released anytime soon. “It is more likely that IS will hold on to them for a while because IS wants to keep Turkey out of Iraq,” Nujaifi explained. Senior Western officials who are closely monitoring the situation agree that IS has no incentive to release the Turks, as this is their best way of ensuring that Turkey does not carry out any kind of military action against the jihadists. “Turkey apparently believed that it had some kind of entente cordiale with them,” said one. “Whether it did or not, after Mosul it has been forced into one,” the official concluded.

Mahmoud Salem writes that even countries as far away as Egypt have much to fear from IS.

“Beyond IS' alternative model to the failed modern Arab state, its raison d’etre alone should have Sisi shuddering. When employed by an Arab state, nationalism can win against local Islamist ideologies, but when it is positioned against the idea of being part of an existing Islamic empire — where borders do not exist and all Muslims are united — the rules suddenly change.”