While Iran was unable to smuggle rockets in, sources claim Tehran instead trained Gaza Strip groups to make their own. 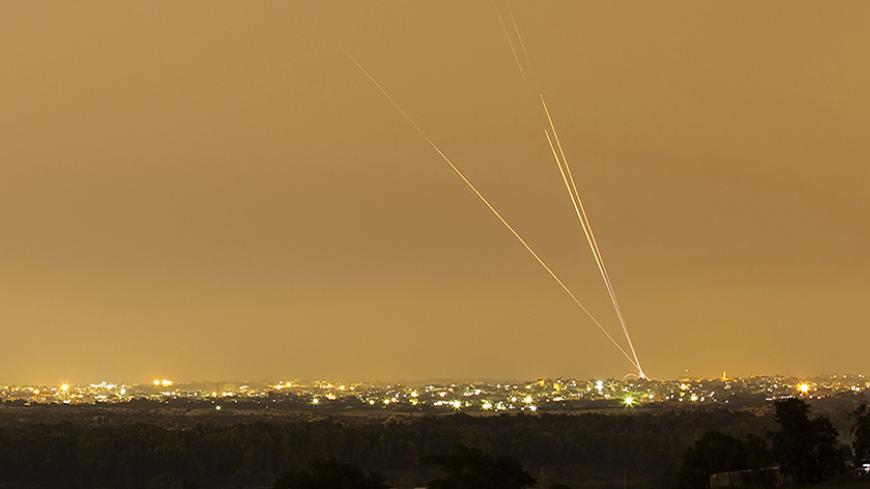 Smoke trails are seen as rockets are launched toward Israel from the northern Gaza Strip, July 12, 2014. - REUTERS/Amir Cohen

Nothing in Tehran suggests that three wars are taking place within what it calls its national security borders. “The bloc is under fire,” said an Iranian official who spoke with Al-Monitor on condition of anonymity. “It is one battle from Baghdad to Gaza. We believe that all that’s happening is linked to each other. Our enemies want us to be weak so that they can impose their conditions on us, but this won’t happen.”

The war in Gaza seems to be very high on the Iranian agenda. Supreme Leader Ayatollah Ali Khamenei spoke twice within three days calling on Muslims to unite. “The Gaza incidents are utterly disastrous, and the Zionist regime is carrying out the current atrocities by taking advantage of the negligence of the Islamic world,” he said, adding, “The killing of the people of Gaza by the usurping Zionists should spur Islamic governments and nations to resolve their differences and become united.”

For years, Israel and the United States accused Iran of arming Palestinian militant groups in Gaza, mainly Hamas and Islamic Jihad. Iran never denied doing so, but since President Hassan Rouhani assumed office in June 2013, Iranian officials became more cautious when addressing the issue. On March 5, Israel announced the capture of an Iranian ship carrying advanced rockets to Gaza. Tehran denied the claim while Israel said the ship, en route to Gaza, was loaded with rockets and military equipment.

According to the official in Tehran, Iran is committed to the Palestinian cause. He said, “We will always stand side by side with the resistance in Palestine and Lebanon. Even in Syria, if there’s any group whose objective is liberating the occupied land, we will back them and support them.” He added, however, that sending arms isn’t always the best way. “We know how much our brothers need support. Israel always claims Iran is sending arms to them. What I can say is that Iran wants to see a strong and self-sufficient resistance. Yes, we are sending rockets and military aid, but not the traditional way.”

What was the Iranian official hinting at?

According to information acquired by Al-Monitor from sources in Tehran, Gaza and Beirut, a new strategy was adopted after the July-August 2006 war in Lebanon with respect to military support. The main goal was protecting the fighting groups from the danger of a military siege by making them capable of producing as many rockets as they need on the spot.

“The main goal was letting our men gain the knowledge, and then everything is easy,” said Amin, a Palestinian official Al-Monitor interviewed via telephone. “This was the idea of Imad Mughniyeh, the Hezbollah military commander. He thought that having (rocket-making) knowledge in the brains of experts would mean that Israel would not be able to achieve anything even if it destroyed the entire rocket stockpile; that doesn’t mean halting the rocket support.”

During the reign of former Egyptian President Hosni Mubarak, smuggling arms into Gaza was very complicated. The tunnels were very useful, yet very dangerous, so more knowledge needed to be transferred to Gaza. In 2007, the main two rockets used by the Palestinian groups were the Qassam and al-Quds, homemade rockets with much more psychological than destructive power, according to Israel officials.

“Several brothers were brought to Tehran, where they met military commanders and experts,” said Amin, adding, “The training courses took time. At the beginning, the Iranians were surprised by our achievements. It’s true our activists needed guidance, but they were smart enough to grasp quickly.”

After the fall of Mubarak during the January 25 Revolution, the borders between Egypt and Gaza were loosened by a lack of security and the chaos that dominated the country. The revolution in Libya was taking place and loads of rockets were available for whoever could pay for them.

“From 2011 until 2012, Grad rockets were smuggled into Gaza, while larger rockets, mainly the ones designed in Iran and Syria, were brought in parts and built inside Gaza,” said Amin. “Palestinian resistance experts, from [Islamic] Jihad and Hamas, each worked alone on building these rockets and some even added new specifications, equipping them with the needs of the field.”

The Iranians essentially smuggled in rockets via the brains of Palestinians, keeping rocket-making knowledge intact despite wars and attacks. It’s the same strategy the Iranians adopted in their nuclear program, under the philosophy that knowledge can’t be bombed.